Daniel Kehlmann’s novel-in-stories explores art, reality, and the series of identities we inhabit — and have thrust upon us 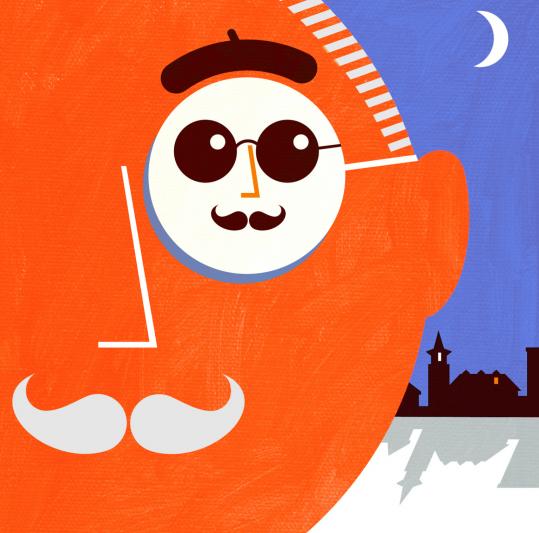 In the Seneca Review a few years back, Chris Offutt provided a tongue-in-cheek definition of a burgeoning genre, the “novel-in-stories”: “A term invented solely to hoodwink the novel-reading public into inadvertently purchasing a collection of short fiction.”

“Fame,’’ by German-Austrian wunderkind Daniel Kehlmann, similarly bills itself as “a novel in nine episodes.” But this slim, funny, provocative book justifies its structure brilliantly. The novel-reading public should be so lucky as to get hoodwinked like this.

Kehlmann, born in 1975 and the author of seven other books, is huge in Germany. His 2005 novel, translated as “Measuring the World,’’ sold 1.4 million copies there. In calling this book “Fame,’’ then, Kehlmann knows whereof he speaks. No fewer than three of his characters are famous writers: Leo Richter, a literary prizewinner; Maria Rubinstein, a crime novelist; and Miguel Auristos Blanco, a blindingly successful purveyor of New Age pap whose books are seeded through the episodes like a “Where’s Waldo?’’ for adults.

Ultimately, though, fame is just a microcosm of Kehlmann’s broader subject. His book is about the double lives we lead — as people and characters, as celebrities and anonymous strangers, as perceived by others and experienced from within. As one adulterous man says, “I had never felt so strongly that I was made up of two people, or rather that I had split one and the same life into two different variants.” Be it painful or thrilling, every character here experiences a similar doubling — and this, Kehlmann implies, is an inevitable part of modern existence.

In the first episode, we meet Ebling, an ordinary computer technician whose cellphone suddenly starts ringing with dozens of calls for someone named Ralf. Bombarded with demands from Ralf’s lovers, colleagues, and friends, Ebling is initially annoyed. But soon he finds himself seduced by his power to derail Ralf’s meetings and break Ralf’s girlfriends’ hearts.

Written in lucid, amusing prose, this story is as surreal as a high-tech Kafka or Cortázar — except that we later learn in another story who Ralf is and why the phone system went awry. An international matinee idol, Ralf Tanner is trapped in a life as oppressive as his cellphone records suggest; as Kehlmann writes, “He had long suspected that the act of being photographed was wearing out his face.” When his cellphone suddenly goes silent, he becomes worried he doesn’t exist. As if compelled, he heads to an impersonators’ night at a bar, where he is told that his Ralf Tanner impression needs work. Soon, he discovers that someone more convincing has assumed his old life.

Kehlmann plays tantalizingly on our sense of whether events are plausible or implausible. Can this narrative be explained only through supernatural, fictional means — or is there a logical, realistic explanation hiding somewhere, perhaps in the next chapter? He thickens the plot by introducing Elisabeth, a hard-working physician with Doctors Without Borders, who has somehow ended up dating the world’s most neurotic man, Leo Richter. In the first of two stories about them, Elisabeth accompanies Leo on a reading tour of Central America. (Everyone asks Leo, “Where do you get your ideas?” “The bathtub,” he says, nearly catatonic with repetition.) Leo’s interest in Elisabeth seems eerily clinical; as Kehlmann writes, “[Elisabeth] had the same profession as his heroine Lara Gaspard, they were the same age, and if she was right . . . the two of them also looked rather alike. . . . He watched her with an almost scientific focus.” This hint of menace bears fruit in the second story. This time, Leo accompanies Elisabeth to a war zone somewhere in Africa — but certain details seem peculiar, as in a dream, and Leo is oddly at ease. Finally, a fellow doctor introduces herself — as Lara Gaspard. Everyone knows anything you say around a writer might end up in a story; Kehlmann goes further, suggesting that a writer such as Leo actually has the power to strand real people inside a work of fiction.

Not that writers are safe, either. In another story, Maria Rubinstein’s junket to an unnamed Central Asian republic turns into a nightmare when she loses her group, bag, and cellphone juice; she finds herself incommunicado and unable to persuade anyone to help. A year later, as another character mentions, there is still no word from her — but sales of her books are booming.

The sly humor of this book is indebted to an excellent translation by Carol Brown Janeway, whose credits include Bernhard Schlink’s “The Reader.’’ Her greatest challenge must have been the one story here that makes for an uncomfortable read, written as the bizarre, almost-colloquial screed of a miserable phone company worker named Mollwitz. The other episodes, however, are graceful and precise.

Near the end, Leo Richter offers a final key to this novel’s episodic structure. “We’re always in stories,” Leo tells Elisabeth as he prepares to leave her stranded in a work of fiction. “You never know where one ends and another begins! . . . It’s only in books that they’re clearly divided.” Clearly divided and purposefully connected, the stories in “Fame’’ make a terrific case for the way fiction enables us to lead double lives — and then, at the stories’ end, to go home.

Amanda Katz is a writer, editor, and translator who lives in New York. She can be reached at amanda@amandalkatz.com.

FAME: A Novel in Nine Episodes
By Daniel Kehlmann
Translated, from the German, by Carol Brown Janeway
Pantheon, 175 pp., $24