The stories of real-life dames that inspired ‘Chicago’ 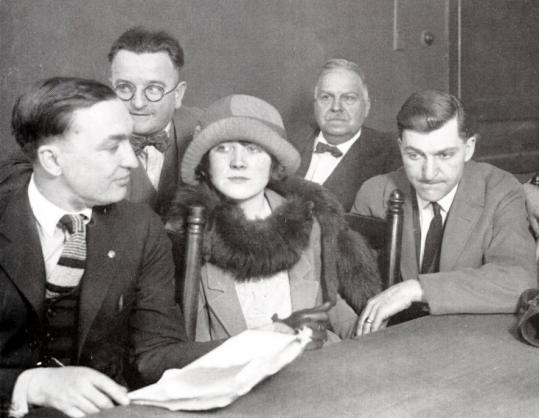 Before it became the stuff of Hollywood legend, Chicago in the 1920s was filled with larger-than-life characters living in a world of gangland violence, bootleg liquor, and celebrity worship. It wasn’t enough to be rich and powerful: Chicagoans like Al Capone also sought celebrity. Capone would get his fame, which was ultimately his undoing. It fueled the determination of federal authorities to put the headline-hungry gangster behind bars. Journalist Douglas Perry takes us back to those crazy, dangerous days of high living in Murder City. “Gangsterism, celebrity, sex, art, music — anything dodgy or gauche or modern boomed in the city,’’ writes Perry.

The loosening morals of 1920s Chicago, and its glut of violence (often connected to illegal liquor consumption), spread to the city’s women. “Women in the city seemed to have gone mad,’’ writes Perry. “They’d become dangerous, especially to their husbands and boyfriends.’’ Perry explores two murders by Chicago women from multiple angles, including how the press sensationalized the cases and how all-male Chicago juries had a longstanding penchant for letting off attractive female killers, whatever the evidence. Perry entertainingly describes how young Chicago Tribune reporter Maurine Watkins covered these two cases and how she would later turn her real-life experiences into the satirical play “Chicago.’’

Murder One: Young and beautiful Belva Gaertner, while working as a cabaret singer, attracted the romantic attentions of a millionaire and married him. Perry describes how life among the idle rich wasn’t enough for Belva, who soon took to leaving her millionaire husband at home while she enjoyed Chicago’s wild night life. After one evening of drinking, she shot her then-boyfriend, Walter Law, also married. Unsurprisingly, the media savored every detail of this sensational tale of infidelity and murder.

Murder Two: Another beautiful Chicagoan, Beulah Annan, spent her days cavorting with boyfriend Harry Kalstedt while her husband was at work. Perry details the entire combustible love triangle. After a drunken argument between the two, Kalstedt ended up shot to death in Beulah’s bedroom. These tales of murder were a gift from above to Chicago newspapers, and Watkins made her name covering both killers. Watkins, a small-town minister’s daughter, grew to love the salaciousness and energy of Jazz Age Chicago. “Gangsters thrilled her,’’ writes Perry, who quotes Watkins saying, “Gunmen are just divine. They have such lovely, quaint, old-fashioned ideas about women being on pedestals.’’

Beulah and Belva threw themselves at the mercy of the juries. Understanding the necessity of looking good, the two women opened a kind of fashion school for female criminals at the Cook County Jail. “They cut each other’s hair in the latest style,’’ writes Perry. “They discussed how to wear cosmetics. They gave themselves and each other manicures.’’

Despite the gruesome nature of both murders, fully described in Perry’s page-turning narrative, the “fashion defense’’ worked. Beulah and Belva were found not guilty by all-male juries, much to the disappointment of reporter Watkins. Frustrated, Watkins transformed this raw material into her classic play. Beulah became the fictional Roxie Hart: “Her Roxie was the moron triumphant, counting on her fellow morons . . . to save her. The play was shocking — and it was hilarious.’’ Perry has shown that “Chicago’’ was no exaggeration: The events depicted were real and the Chicago court system was simply beyond satire. “The Girls of Murder City’’ is a well-researched and skillfully crafted time capsule about Chicago-style justice (or lack thereof). Fans of true crime and popular history will enjoy the book’s oversized female characters and its hardboiled background of crime and no punishment.

Chuck Leddy, a freelance writer who lives in Dorchester, can be reached at chuckleddy@com cast.net.

THE GIRLS OF MURDER CITY: Fame, Lust, and the Beautiful Killers Who Inspired “Chicago’’ By Douglas Perry