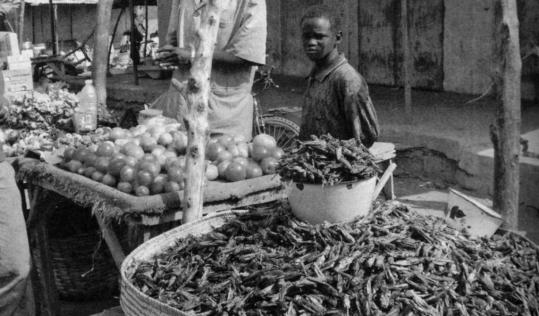 Hugh Raffles explores the paradoxical role of grasshoppers and locusts in Africa. Here they are being sold as delicacies to shoppers. But the insects also periodically swarm, causing famine. (Hugh Raffles)
By Anthony Doerr June 27, 2010

Summer has just landed and with it comes bugs. Legions, hordes, swarms of bugs. They’re coming to eat our lettuce, spread our pathogens, gnaw our roofs, raid our cabinets, presage our plagues, and drink our blood. Who needs ’em?

We do, actually. Without insects we’d have no vegetables, no birds, no flowers, no hamburgers, no cotton, no trout. No ice cream! No rose bushes! Terrestrial ecosystems would collapse. Dead bodies would rot in the streets.

So we take the bad with the good, the stings with the honey. But insects can offer us less material gifts, too, if we make a bit of time now and then to peer into our yards and consider the world in their dimensions. Place, for example, becomes a wholly different concept when we consider it on the scale of insects. The larva of certain moths, for example, will spend their entire lives chewing the cells of a single leaf in your backyard. The larva of a species of wasp is smaller than an amoeba. And other bugs are globe trotters: Nearly every monarch butterfly you see either flapped into your neighborhood from thousands of miles away or descended from a butterfly that did.

“There are other worlds around us,” writes anthropologist Hugh Raffles in his erudite new book, “Insectopedia.’’ “Too often, we pass through them unknowing, seeing but blind, hearing but deaf, touching but not feeling, contained by the limits of our senses, the banality of our imaginations, our Ptolemaic certitudes.”

“Insectopedia’’ is Raffles’s effort to extend his imagination and peer into a handful of those worlds. His book has 26 chapters, an essay for each letter in the alphabet, and the topics he examines are as diverse as the phylum Arthropoda itself. “Generosity (the Happy Times),” for example, is a long piece about cricket fighting in China. “Jews” is about the association of Jewish people with lice during the Holocaust. “The Quality of Queerness Is Not Strange Enough” is about insect homosexuality.

Sometimes “Insectopedia’’ is beautifully lyrical, and occasionally it is extremely esoteric. Ultimately it’s less about insects and more about the intersections of our worlds with theirs, about folk tales that draw moral lessons from insect behavior, artists who paint insect bodies, and sound engineers who record the epidemic destruction of our forests by bark beetles.

Another fascinating new book about bugs is “Tracks and Signs of Insects and Other Invertebrates: A Guide to North American Species,’’ by Charley Eiseman and Noah Charney. This is a field guide, but an unusual one. It’s a guide not to insects themselves, but to the myriad traces they leave behind.

Imagine a “tracker,’’ and you probably picture a fur-clad desperado kneeling over a paw print on some windswept mountain pass.

But trackers can track invertebrates, too, and Charney and Eiseman are trained naturalists who spent two years crawling around North America looking at minutiae, stalking insects on a scale that is both humble and impossibly grand.

They’re not just writing about footprints, either, though they do offer an entire chapter on them. No, Charney and Eiseman scrutinize the countless signs insects leave around us every day: galls on trees, blotches on leaves, egg cases in crawl spaces, webs in ceiling fans, and even bumps on human skin. They are detectives in the truest sense of the word, creeping around with magnifying glasses, studying mysterious objects, and deducing the stories of how such signs originated. And their book invites you to play detective along with them.

Find a tiny tunnel made of pebbles on a log? That’s a spider retreat. Find a redbud leaf rolled and fastened with minute threads of silk? A leaf folding caterpillar probably did that. Find a dead spider covered with white fur? A pathogenic fungus might have done him in. The husk of a housefly swaddled in silk was clearly lunch for a house spider. A tiny field of shining white spheres, like a handful of miniature pearls, are the eggs of a tiger moth.

What’s most impressive about “Tracks and Signs of Insects and Other Invertebrates’’ is that one can flip through its almost 600 illustrated pages and still understand that it barely scratches the surface. “Indeed,” Charney and Eiseman confess in their introduction, “when we set out on walks to search for invertebrate sign, we usually found it difficult even to make it to the end of the driveway.”

After all, there are more species of North American invertebrates than there are words in this newspaper. Raffles puts it like this: “I’m trying hard to include them all. But, honestly, there are just too many. Even the most ambitious and richly illustrated insectopedia wouldn’t have room.”

Both books are big, beautiful testaments to the glory of paying attention. Every scrape and pit and swelling in our yards, every emergence hole and wood gallery and leaf mine in the nearby woods, presents a clue to a story, a life, a narrative. Every ant we walk past is an opportunity to better understand our world.

That’s an important thing to remember this summer as you listen to the bees hum drowsily in your garden or to your neighbor’s backyard bug zapper incinerate another mosquito. All day and all night, at our feet, in our walls, in the soil of our lawns, and in the air above our shingles, the insects are going about their lives, at scales that challenge our understanding of place and time. And we are connected to them by a multitude of ecological threads, far more than we currently understand.

Anthony Doerr’s fourth book, a collection of stories titled ”Memory Wall,” will be published in July. He can be reached at adoerr@cableone.net.

TRACKS AND SIGNS OF INSECTS AND OTHER INVERTEBRATES: A Guide to North American Species By Charley Eiseman