My anticommunist friend, my Islamic enemy 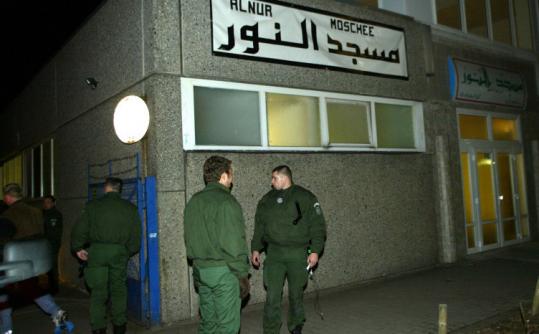 German police guard the entrance to a Berlin mosque in 2003 after the arrest of suspected terrorists who frequented it. (AP File Photo)
By David M. Shribman Globe Correspondent / May 23, 2010

Ian Johnson, a former Wall Street Journal reporter with a gift for finding archival material ignored or passed over by scholars, spent five years examining one of the most tragic misuses of that Arabic adage, and the result is an astonishing little volume, “A Mosque in Munich,’’ a book that carries the most remarkable subtitle of the publishing season: “Nazis, the CIA, and the Rise of the Muslim Brotherhood in the West.’’ What could these three elements possibly have in common?

A lot, it turns out. For the three elements, separated by decades, geography, and outlook, are the unlikely building blocks of the contemporary crisis posed by radical Islam and terrorism. Here’s how it happened: In their bitter war with the Soviets, the Nazis recruited alienated Muslims from the faraway Islamic territories of Stalin’s empire. When the conflict ended, the CIA sought to turn them into an underground advance guard against world communism. Neither the Nazis nor the operatives from Langley cared a whit that their willing agents of resentment had an allegiance to a higher master than the Axis powers or NATO — the tenets of the radical Muslim Brotherhood, a movement dedicated to a worldwide religious revival, tolerant if not supportive of terrorism, and sometimes regarded as a precursor to Al Qaeda.

Johnson meticulously assembles a narrative all but unknown in the West, setting out how, long before the United States supported the mujahideen in Afghanistan as holy warriors against Soviet aggression, the Americans harnessed the anticommunist Islamic diaspora in West Germany to undermine the Soviet Bloc after World War II.

The locus of the book involves the building of a Munich mosque, which was conceived in the late 1950s but wasn’t completed until 1973. The decadeslong struggle to construct this center provided a focus for the former Nazis, cold warriors, and radical Islamists who used it for their sometimes-convergent purposes.

This is a story full of men with Nazi ties and sympathies —“bitter anticommunists,’’ Johnson describes them, “who would prove valuable to the West.’’ They would number as many as 250,000. First they would fight the Soviets in a hot war (at Stalingrad, for example) and then they would fight them in the more subtle battles of the Cold War.

It is a tale of spymasters and specialists in Islam, of idealism and Islamism, of clan rivalries and clandestine payments, of deception and self-deception, of agents and agitators, of American desperation to counter the Soviets and Muslim dedication to a struggle bigger, deeper, and perhaps more enduring and significant than the Cold War.

But, like most of history, and particularly the postwar struggles against communism and Islamism, it is a story of unintended consequences and unanticipated crises. “It is probable that the [postwar] use of the Muslim Brotherhood made it easier for U.S. intelligence to arm the Afghanis,’’ Johnson writes. “When that support ran its course two decades later after the 9/11 attacks, most would look to Afghanistan for the historical basis of that assault. That was not incorrect but few realized that its prototype was Munich.’’

The reference is to the mosque, formally the Islamic Center of Munich, which provided either — choose your metaphor — a staging ground or a beachhead for radical Islam in Western Europe. Or perhaps you prefer the metaphor of a foothold to describe the role that the mosque and the Muslim Brotherhood, founded in Egypt in 1928, play in Johnson’s story of intrigue:

“Its members did not lose interest or focus. They grasped the small foothold prepared for them by West German and U.S. intelligence. Quietly, they turned the Munich mosque into a beachhead for expansion into the Western world.’’

The American strategy of using Islamic warriors and the American tragedy of being used by those very warriors spanned more than a half-century and was one of the animating ideas of US foreign policy even in years where there was no evident major American involvement in Islamic affairs. President Dwight Eisenhower, for example, “said he thought we should do everything possible to stress the ‘holy war’ aspect’’ to prompt Arabs to oppose communism, according to an account of a White House covert-operations meeting unearthed by Johnson.

The irony is that Islamic elements, including members of the Muslim Brotherhood already accustomed to being used by the West, are being enlisted again in our own age, this time to present a counterforce to radical Islamists, whose ideas they may share privately. “From a historical perspective,’’ Johnson writes of one of these initiatives, which brought together 65 Belgian Muslims and Americans from the Islamic Society of North America only five years ago, “this was almost comical.’’ Comical — and cyclical.

A MOSQUE IN MUNICH: Nazis, the CIA, and the Rise of the Muslim Brotherhood in the West
By Ian Johnson
Houghton Mifflin Harcourt,
318 pp., $27