Probing the mystery of faith, found or lost

I picked up journalist Eric Lax’s heartfelt new memoir after reading his recent opinion piece in The New York Times in which he lovingly supported the controversial election of the Rev. Mary Glasspool, who is gay, as an assistant bishop in Los Angeles’ Episcopal Diocese.

“Faith Interrupted’’ is in part a longer reflection on the troubling paradoxes that confront a religiously observant life. Lax, the son of an Episcopal priest and the author of a well-known biography of Woody Allen, spent his childhood steeped in his family’s faith, serving as an acolyte in his father’s Southern California church. Lax tenderly writes that “at the altar we were like dance partners, each of whom knew the other’s steps before he made them.’’

In an age of dysfunctional family relationships, the Laxes stand out for their mutual love and respect even as Eric eventually abandons the religion of his childhood. Yet “Faith Interrupted’’ is such an honest and affecting memoir that one can imagine Lax wrote much of it in the same frame of mind in which he contemplated the night sky as a boy at Camp Stevens. The Episcopal camp, where his father served as chaplain, held memories of a first kiss as well as God’s surrounding grandeur. Lax writes that “I felt particularly close to God as I drifted to sleep, and woke up in the morning thinking I would become a priest.’’

Lax attended Hobart College, a school affiliated with the Episcopal Church, on a generous scholarship. At Hobart he counted Jews among his closest friends and was influenced by Rabbi Hillel’s teaching that loving one’s neighbor is the crux of the entire Torah. Lax was also struck by how closely Jesus and his disciples mirrored Hillel’s lessons. It was at this time that he also began to see his faith in a new and more complex light by trying to prove God’s existence through the works of St. Augustine and Thomas Aquinas.

At Hobart, Lax met George “Skip’’ Packard, who would become a lifelong friend and religious influence. Skip’s experiences in Vietnam, as well as his journey to the Episcopal priesthood, are very much a part of Lax’s spiritual autobiography and take their rightful place in “Faith Interrupted.’’

By the time Lax graduated from Hobart in 1966 he knew that he would go before his draft board as a conscientious objector. While Packard commanded a combat platoon in Vietnam, Lax initially deferred the draft by joining the Peace Corps, where he was a volunteer in Micronesia. Their experiences would challenge their faith in the vein of “when bad things happen to good people.’’

Lax concedes that had it not been for the deep, painful, spiritual challenge brought on by the Vietnam War, “I could well have continued to sail along in my contented belief.’’

In the end, Lax longs to reconcile with the god of Spinoza and Einstein. A god “who reveals himself in the orderly harmony of what exists, not in a God who concerns himself with the fates and actions of human beings.’’ As he struggles with a de facto atheism, he takes comfort in the words his beloved and wise father once wrote to him: “When and if we get to heaven, the honest Atheist will find that God will probably say, ‘You were mistaken, but come in.’ ’’

Later in “Faith Interrupted,’’ Lax quotes his longtime friend Allen on the subject: “To you I’m an atheist; to God, I’m the loyal opposition.’’ By the end, Lax has instead come to embrace a kind of faith in humanism, enabling him to stand up for Mary Glasspool and others hurt by misguided religious dogma and institutions.

Judy Bolton-Fasman is a columnist for the Jewish Advocate. 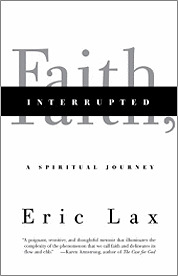