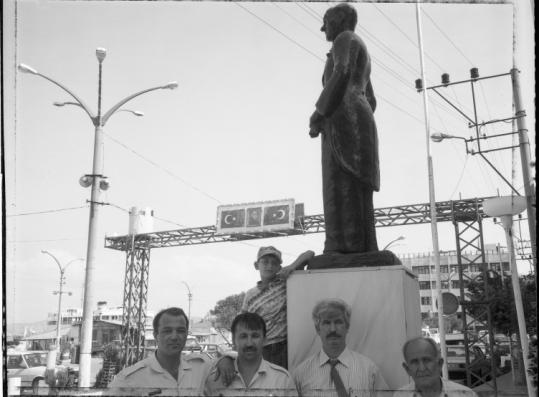 Two visual artists — one American, the other Turkish — traveled throughout Turkey over 12 years, driven by an image they found everywhere. Their new book, “The State of Ata: The Contested Imagery of Power in Turkey” (Eighteen Publications), is at once a travelogue, oral history, photo album, and meditation on Turkey’s past, present, and future.

Mike Mandel and Chantal Zakari, a married couple who both teach at the School of the Museum of Fine Arts in Boston, returned to Zakari’s native Turkey to explore the legacy of Mustafa Kemal Atatürk, founder of the Republic of Turkey and its first president. His image hangs in schools and other public buildings throughout the country and virtually every town has a statue of him.

Atatürk, who died in 1938, pushed Turkey to become a modern Western state. The wearing of religious clothing in public was banned, women’s legal rights were expanded, and the Arabic alphabet was dropped in favor of Latin characters.

Yet a divide remains. In 1997 when Zakari held up a picture of Atatürk at a march of Islamists as a sign of her support for a secular society, she made front-page news all over Turkey. Mandel writes that some in the religious media accused Zakari of being an agent of the CIA seeking to divide the Turkish people. Others gave Zakari flowers for taking a stand.

Nature’s wordsmith
Gretel Ehrlich is this year’s winner of PEN New England’s Henry David Thoreau Prize for Literary Excellence in Nature Writing. Ehrlich, who has written books about Wyoming, Greenland, and being struck by lightning, will give a talk at 7 p.m. May 6 at 24 Oxford St., Cambridge.
Deadly caretaker
When the Archer Home for Elderly People and Chronic Invalids opened in 1907, it was the first business of its kind in New England. Patients turned over their wealth in exchange for lifetime care at the rooming house in Windsor, Conn.

Four years later a reporter for The Hartford Courant became suspicious after he noticed a sharp increase in the number of obituaries for Archer Home residents. In 1916 an investigation brought down one of America’s most prolific serial killers.

The home’s founder, Amy Archer-Gilligan, accused of murdering both of her husbands and as many as 66 patients with cocktails of lemonade and arsenic, was sentenced to life in prison. Her story inspired the madcap Broadway hit “Arsenic and Old Lace.”

A serious tone prevails in “The Devil’s Rooming House” (Lyons) by M. William Phelps. After poring over 1,200 pages of trial transcripts, Phelps concludes that Archer-Gilligan remains as much of an enigma today as she was to her contemporaries.

■“Duel at Dawn: Heroes, Martyrs, and the Rise of Modern Mathematics” by Amir Alexander (Harvard University)

■“Get Capone: The Secret Plot That Captured America’s Most Wanted Gangster” by Jonathan Eig (Simon & Schuster)

Pick of the week
Ellen Meeropol of Odyssey Bookshop in South Hadley recommends “Day for Night” by Frederick Reiken (Reagan Arthur): “This novel magically and eloquently links swimming with manatees in Florida with a comatose young man held hostage in Utah, a fugitive radical woman, and a kibbutz on the Dead Sea. It’s beautifully written, magnificently cerebral, entirely compelling.”