Stranger in a strange land

A computer expert from Quatar travels to N.Y. and reinvents language and genres 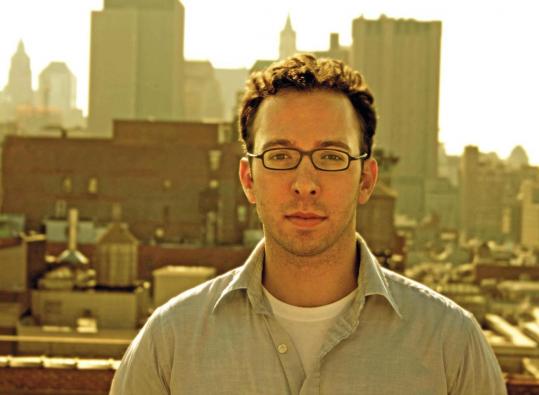 Teddy Wayne’s novel is the best to date in the 9/11 genre, exploring the clash between two worldviews. (Rory Gunderson)
By Anis Shivani Globe Correspondent / April 25, 2010

Teddy Wayne has written one of the best novels of my generation. Free of the traps recent fiction writers have fallen into — uninteresting, paralyzed, dysfunctional characters; inorganic plots stemming from too narrow an appreciation of reality; overwritten language that pretends to be lyrical as a substitute for clear thought — “Kapitoil’’ cuts through our cultural moment as sharply as Evelyn Waugh’s “Scoop’’ or “A Handful of Dust’’ did for their time.

Wayne’s protagonist, Karim Issar, is a Muslim computer programmer from Doha, Qatar, who travels to Shrub Equities’ New York office to help with Y2K debugging. The novel consists of Karim’s diary entries from October through December of 1999. The highly compressed time period suggests that in a globalized world the typical extended time span of the immigrant novel might be unnecessary.

Karim’s concoction of business jargon, mathematical probabilities, and predictive speculations is what makes him most “Karim-esque.” Striving to master American English, he diligently lists new words and phrases at the end of each chapter; after meeting his officemates Jefferson Smithfield, Dan Wulf, and Rebecca Goldman, he defines various words and phrases such as: book it, genuflect, kudos, minor league, piggyback, pod(mate), privy to, scintillating, vassal, you was robbed. When Karim shivers, he “vibrates”; when he gets better, he is “enhanced”; he often “reroutes” his brain.

The novel’s major theme is how language shapes our thoughts and relationships. Can individuals, businesses, institutions, and, above all, civilizations bargain with each other so one party’s gain doesn’t necessarily mean the loss of another? Our constrained vocabularies make it difficult to imagine playing such non-zero-sum games. But in making his lovable protagonist, Karim, express himself through an unnatural-sounding language, Wayne forces us to question how our own familiar language restrains our thinking and our own best instincts. By allowing Karim free play through his unique language, Wayne upends the conventions of the immigrant novel, the 9/ 11 novel, and the Wall Street novel.

As an outsider, Karim is able to see things that natives ignore; this quality allows him to write a program that can profit off oil futures, based on the predictive ability of news about instability in the Middle East. This program, Kapitoil, becomes a potential lifeline for troubled Shrub Equities. The firm’s legendary founder, Derek Shrub, wines and dines Karim, takes him to the World Series at Yankee Stadium, and invites him to his Connecticut mansion — all with a view to getting Karim to sign over ownership to Kapitoil.

Karim develops other ideas; he wants to turn the program to epidemiological purposes, to help predict the spread of diseases in the developing world. His mother died early, and his beloved sister, Zahira, a smart biology student, suffers from ulcerative colitis. Shrub is as generous with Karim as he possibly can be, yet this is not enough for Karim.

“Kapitoil’’ is also a love story, free of every cliché of recent literary fiction. Karim — a truly Stendhalian romantic hero — falls in love with Rebecca, becoming quite a humanist in the process. Rebecca introduces him to Leonard Cohen and Bob Dylan, and under her tutelage he makes the jump straight to a Karim-esque humanist postmodernism. The clash between language styles allows Wayne to bypass familiar first-person fictional consciousness and create new space for emotions.

We desperately wish Karim and Rebecca to beat the odds and be together, but Shrub is an immovable wall; once Karim makes his final decision about Kapitoil, Shrub warns him: “You don’t exist. . . . People from your area of the world can encounter visa problems very easily. . . . Sometimes they can’t reenter the U.S. after they leave. Forever.” Confronted with the potential loss of Rebecca, Karim, of course, makes a uniquely Karim-esque decision.

Throughout “Kapitoil,’’ Karim’s rational brain tries to make sense of the power configurations in various American games: fantasy baseball, real baseball, racquetball, pool, Taboo, Scrabble; each has penetrable rules, as is true of our overall culture. Karim’s sheer decency compels him to break rules again and again; his most touching encounters are with the black driver Barron, toward whom Karim shows no class animus, and with whom occur Karim’s first and last encounters in Manhattan.

Why did 9/11 happen, and why do we continue to respond so blindly? Wayne answers these questions better than Mohsin Hamid or Joseph O’Neill, the best authors of this genre until now. There is no metaphorical overload, no figurative ecstasy, just translucent narrative of the clash between a worldview that embraces larger values and one informed by self-centered materialism. Wayne has completely foreseen and transcended the exhaustion of the 9/11 genre.

Wayne doesn’t resort to simplistic negative stereotyping of Wall Street, yet the truth emerges that America appears destined to keep playing hypercompetitive games until complete extinction; we’re too far down our path for internal or external rescue, and there will be no second acts.

This is a lot for one novel to pull off. After reading “Kapitoil,’’ you just might agree that this young author’s fictional algorithms are impossibly ahead of the critically accepted market signals.

Anis Shivani’s debut book, “Anatolia and Other Stories,’’ as just been released by Black Lawrence. He is finishing a novel called “The Slums of Karachi.’’