Stories of growing pains and pleasures

A ghost turns on the faucet at three in the morning; a woman dying of cancer travels abroad with her daughter for a “blood boiling’’ cure; a dog attempts suicide. When it comes to the certainties and vagaries of domestic life, Marisa Silver’s subtle stories cover the waterfront.

Silver’s new collection, “Alone With You,’’ follows her radiant novel, “The God of War,’’ and while it is less consistently masterful than the earlier work, it is, nevertheless, masterful. Like the novel, these elegantly written stories quiver with the pain and pleasure of growing up, growing apart, growing old.

Silver writes equally persuasively about adult-like children and childlike adults. In “Pond,’’ Martha, a young woman with a profound intellectual disability, gives birth to a boy, resulting in a complex and delicate family dynamic among Martha, her separated parents, and their grandchild, Gary. Silver travels as easily in and out of each character’s consciousness as she does back and forth through the 10 years of the narrative. She is not afraid of explication and proves that, contrary to writing-class wisdom, telling can be as effective as showing: “It hurt Burton to feel for the boy as he did, as if the emotion of simply loving Gary included the darker, more complicated kinds of love he had for Martha, who played in the shallows nearby, kicking up water with her feet, and for Julia, whom he had left.’’

About sex in both knowing adolescents and repressed adults, Silver is witty and nuanced. In “Leap,’’ a girl ponders a parental admonition: “When Sheila was young, her mother told her not to go looking for trouble, but that didn’t seem to be good advice. How else would you find it? . . . You could be driven home by a father after a babysitting gig and let him touch your breasts. You could have a fight with your boyfriend and get out of his car on a lonely road and be picked up by a stranger. You could have sex with a boy in his dorm room while his roommates walked in and out.’’ And in the title story, a refined, modest woman who has found a hard-core porn magazine among her boyfriend’s things rationalizes touchingly: “She convinced herself that the magazine didn’t matter. She had fantasies, didn’t she? When she and Edward were together in bed, didn’t she sometimes think of that attractive British actor with the high cheekbones she’d seen on PBS?’’

Occasionally, Silver’s eloquence overreaches — jackets thrown on the floor make “arrogant puddles’’; sounds “thread’’ upstairs. But this is rare. Usually, Silver’s prose is as darkly luminous as the Edward Hopper painting on the book’s cover. One tableau — in the story “Temporary’’ — is pure Hopper. A teenage girl pays a surprise visit to her father’s jewelry store. “Through the glass storefront, she saw her father come out from behind the counter to fasten a woman’s necklace. The woman’s neck was long and pale, and her dark hair was drawn to the side and over one shoulder to make way for the jewelry. When Vivian’s father was finished with the clasp, he took the woman’s hair and spread it carefully along her back, as if he were smoothing a wrinkled dress. He rested his hands on the woman’s shoulders while she admired herself in a handheld mirror.’’

That our lives unfold before us with a chilling ambiguity and no particular regard for our preferences is the truth that Silver reveals. She does so with a sympathy and affection so wide and deep that when we’ve finished the book, we want more.

Alec Solomita is a fiction writer and critic living in Somerville. 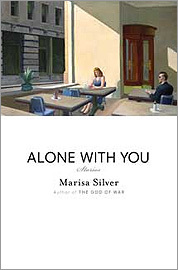 ALONE WITH YOU By Marisa Silver