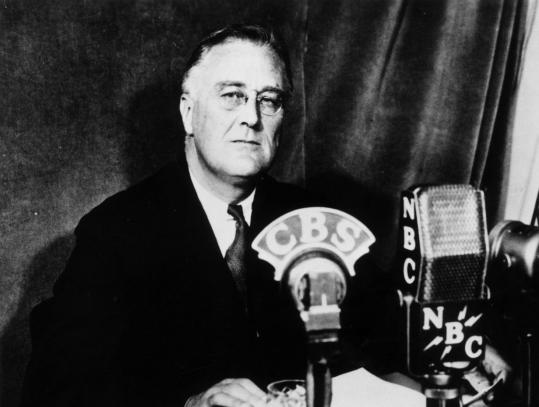 President Roosevelt proposed one justice be added to the court for every justice reaching age 70 who refused to retire. (Mpi/Getty Images)
By Jay Wexler Globe Correspondent / March 28, 2010

See if you can guess what year it is. The economy is in turmoil. Bankers are public enemy No. 1. A popular president pursues reform and is accused of being a socialist. The US Supreme Court is deeply divided; a wishy-washy milquetoast swings in the center while a “tempestuous old buzzard” perches on the far right, speaking “his mind freely and somewhat bluntly — as children do.” At the State of the Union, the president scolds the court for protecting the rights of large corporations at the expense of individuals. The are the defending world champions of baseball.

That’s right — the answer is 1937. Joe DiMaggio and Lou Gehrig led the Yankees attack, while Justices Owen Roberts and James McReynolds occupied the roles currently played by Anthony Kennedy and Antonin Scalia. Franklin Delano Roosevelt pursued his New Deal to pull the country out of the Great Depression. The court invoked the Constitution to strike down key parts of FDR’s program. FDR responded by publicly berating the court and proposing to pack it full of justices sympathetic to reform.

The battle between FDR and the Supreme Court is the subject of Jeff Shesol’s superb new book, “Supreme Power: Franklin Roosevelt vs. the Supreme Court.’’ Shesol is a former speechwriter for Bill Clinton and the author of “Mutual Contempt,’’ a study of the bitter relationship between Lyndon Johnson and Robert F. Kennedy. In “Supreme Power,’’ Shesol has provided a blow-by-blow account of the tension that blossomed between FDR and the court in 1935 and came to a head with FDR’s proposed court-packing scheme two years later.

“Blow by blow” might be a bit of an understatement. The detail in this giant brick of a book is extraordinary. This is no dry scholar’s account of historical events. Shesol is a terrific storyteller, and he brings the book’s events to life by taking the reader inside the key places where the constitutional conflict took shape — the courtroom where the major decisions were announced, the smoky meetings where Roosevelt and his advisers hatched the court-packing plan, the halls of Congress where FDR’s supporters and opponents battled for legislative supremacy.

Shesol’s book appeals to the senses. We don’t just learn that there was a dinner; we learn what was served (filet of sole and green peas at the White House’s annual dinner for members of the judiciary; blue crabs and cold beer at Roosevelt’s island retreat for fellow Democrats). People do not go quietly about their business. Fists are pounded and smashed, gavels are shattered, “war whoops” are emitted, factories whistle “joyous shrieks,” and when the court announces that one of the New Deal’s most crucial statutes is unconstitutional, the crowd takes a “sharp, audible intake of breath” and a young man shouts “Hot dog!”

The framers of our Constitution created three branches of government to check and balance each other because they were terrified of concentrated power. Nothing risked tyranny more, figured these wise men, than the prospect of a single institution or person — say, a king — that could exercise unchecked authority. But as the events of the mid-1930s make clear, separation of powers is not always positive. In times of crisis, when quick and decisive action must be taken to preserve the nation’s well-being, a government with many power centers can seem like a real drag.

At least it seemed that way to FDR. The president’s plan was a bill that would have added one justice to the court for every sitting justice reaching the age of 70 who refused to retire.

Shesol details FDR’s mishandling of the bill — the president miscalculated the political costs of keeping his plan secret until the last moment and unwisely defended it as a corrective for the justices’ advanced age rather than their conservative judicial views — and concludes, as others have, that FDR’s hubris had much to do with the bill’s ultimate failure. Still, though, Shesol ultimately defends Roosevelt. “Pride does not always result in a fall,” Shesol writes. “If the Court plan was the product of hubris, then so, in a real sense, was the entire New Deal.”

The last straw for the court-packing bill came when swing Justice Owen Roberts voted to uphold a state minimum wage law, thus signaling that the court had moved definitively to the left. Scholars have long debated whether this “switch in time that saved nine” was a result of the pressure that FDR put on the court. Many see the shift instead as having nothing to do with outside forces; one member of this camp has memorably suggested that the court’s leftward shift could just as easily be chalked up to the Yankee’s successful 1936 season as to anything that FDR did. Shesol raises this debate but wisely stays mostly clear of it, suggesting only that the court’s switch was likely the result of a complex amalgamation of internal and external forces.

In the wake of President Obama’s State of the Union rebuke of the court, the blogosphere is now abuzz with comparisons between Obama and Roosevelt, with some even raising the possibility that Obama will seek to introduce a court-packing plan of his own. Unlikely, of course. Also, perhaps, unnecessary. After all, the Bronx Bombers did win the World Series again last year. Something good has to come of that, doesn’t it?

Jay Wexler, professor of law at Boston University, is the author of “Holy Hullabaloos: A Road Trip to the Battlegrounds of the Church/State Wars.’’