Climate change proves an ill-suited theme for satirical fiction, no matter how astute and elegant 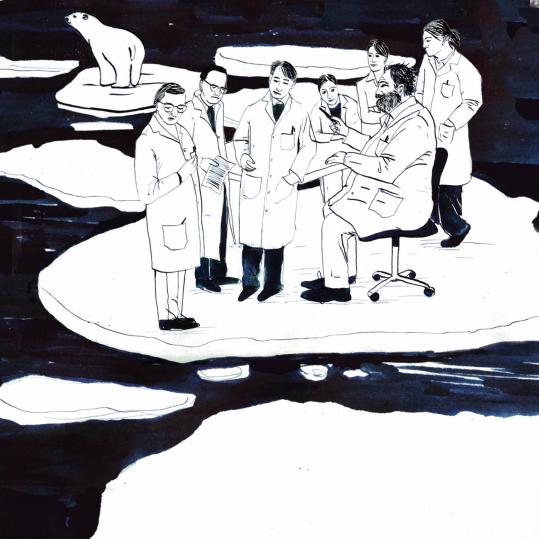 Ian McEwan’s eagerly awaited new novel on the subject of climate change is a genial sort of disaster. Its preposterous plot and backfiring comedy do not completely snuff out the pleasures afforded by its wry tone and (unexpectedly in McEwan) sustained episodes of slapstick. But the undertaking as a whole has a doomed and laborious air from the start, and McEwan’s tremendous storytelling gifts, the fluency of his prose, and his civilized intelligence are unable to redeem it.

In fact, all these things may have hampered him. Writing fiction about climate change without seeming overly earnest was always going to be the problem (a problem McEwan could presumably have avoided by turning out, say, an op-ed column instead of a 287-page novel). His solution was to settle on a mode that is blackly comic. But black comedy requires the kick of nihilism to get it going. McEwan — humane and reasonable to a fault — is no nihilist.

“Solar” introduces us to Michael Beard, a Nobel Prize-winning scientist who is, despite his brains, a flamboyant mess. Permanently exhausted and disheveled, he drinks, he eats, he packs on the pounds, he plows through marriages and affairs, and spends half his life flying over the Atlantic. He is like a diluted version of John Self, the dissolute main character in “Money,” the 1984 novel by McEwan’s close friend Martin Amis, except that he is — or was (all his original work is well behind him) — a brilliant scientist.

The novel is divided into three sections. The first, set in 2000, sees Beard shaggily heading a government-backed initiative to combat global warming. Surprisingly, he is a skeptic. This allows McEwan, through Beard, to give voice to all the usual objections voiced by dissenters in the climate change debate, and to embody impulses we may all have felt at one time or another. For instance, subjected to the latest catalog of dire climate change predictions from his young and pony-tailed colleague, Tom Aldous, Beard “sank into a gloom of inattention.” What he disliked about political people was the way “injustice and calamity animated them, it was their milk, their lifeblood, it pleasured them.”

How true. And yet we never forget, here and in the next two sections, which take place in 2005 and 2009, that McEwan is using Beard’s various predicaments to illustrate aspects of the issue that arouse his interest. It is, in other words, an issue-driven novel — and it suffers from it.

The problem arises again when, while his latest marriage dissolves around him, Beard takes a trip to the North Pole (McEwan, as has been well-publicized, took a similar trip). His companions are creative types concerned about climate change.

McEwan has a lot of fun with Ski-Doos and polar bears, rather lamely inserting little commentaries that bear on the book’s larger themes: “the rationalist in Michael Beard died hard” and “he instinctively knew it was wrong to dishonor a good story.”

Later, in a theatrical set piece that finally gets the plot out of neutral and into low gear, Aldous, Beard’s colleague, trips on a bear skin rug in Beard’s home, with fatal consequences.

“It was the dead polar bears you had to watch,” writes McEwan, barely smothering an authorial snigger. The reference is back to Beard’s earlier near-encounter with a living polar bear in the Arctic, but also, of course, to the effects of climate change. The joke is so laboriously set up, so bad, that it is almost wonderful.

Perhaps more disconcerting is a tendency noticeable throughout the book for McEwan to revisit, in a queasily ironic, self-mocking mode, episodes or devices from his earlier fiction. The problem of how to dispose of an accidental corpse recalls the great and grisly scene in McEwan’s “The Innocent” (his most underrated novel); the encounter with the polar bear recalls the terrifying encounter with two canines in “Black Dogs”; the potential of an unexpected pregnancy to save a relationship (an episode which occurs late in “Solar”) revives a similar episode in “The Child in Time.” McEwan’s use of a scientific type as his main character and his calculated sowing of confusion between psychological case studies and fictional reality both echo aspects of “Enduring Love.”

It all feels rather contrived. Certainly it goes beyond the thematic consistency one comes to expect from novelists; instead, it has something forced and fruitless about it, as if the creative well had dried up and all that were left were pastiche.

McEwan, it seems to me, has fallen more and more in love with the idea of performing as a public intellectual — an eminently sane and reasonable man who happens to be a novelist but is finally more concerned to play a broader, edifying role. (Why else would he think that writing a novel on the theme of climate change was a good idea?)

It’s to his credit that he recognizes the need for humor in this undertaking. Moreover, his humane and inquiring mind, which never tires of admitting complexity and acknowledging the workings of our darker instincts, remains a reassuring presence in public life.

But “Solar,” which culminates in a pileup of karmic revenges that John Cleese might have contrived, ultimately comes across as pat.

“Don’t be a denier,” Beard’s doctor tells him (“appearing to refer back to their climate change chats”) when warning of the need to do something about a melanoma on his skin. “This won’t go away just because you don’t want it or are not thinking about it.” Potentially, I suppose, such an exchange might prompt you to furrow your brow and reflect seriously on the planetary perils of inaction. But it might also prompt you to put the book down and go seek some less patronizing company.