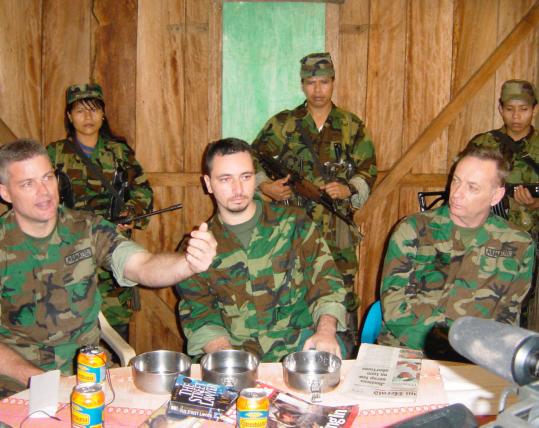 What would you say if I told you that a detachment of Colombian Army commandos sent to retrieve three American hostages stumbled across $20 million that the guerrillas they were pursuing had stashed in the jungle? What if I added that one of the commandos used his share of the twice-stolen loot to procure a sex change operation, open a beauty salon, and, calling herself Jenny, start dating a policeman? You’d say I was bananas, that’s what.

But these are just a couple of the amazing facts contained in John Otis’s mesmerizing nonfiction book, “Law of the Jungle.’’ Otis, a veteran newspaper reporter who has covered South America for more than 20 years, has assembled a yarn that would make a magical realist blush, complete with outlandish characters, tragicomic twists of fate, and far-flung deeds of derring-do.

On Feb. 13, 2003, a five-man crew of civilian contractors (four of them Americans), flying a clunky, outmoded US drug surveillance plane, crash-landed on a tiny patch of cleared land in the jungle near the Colombian village of El Para. Within minutes, the contractors were surrounded by the Revolutionary Armed Forces of Colombia, or FARC, a communist rebel group notorious for drug trafficking, extortion, kidnapping, and domestic terrorism. The guerrillas immediately murdered one of the pilots, Tommy Janis, and a Colombian Army sergeant, Luis Alcides Cruz, an observer mandated by law to accompany these American-operated flyover missions, dubbed “Econ-Recon” because they were low-budget operations. The three remaining Americans — ex-Marine Keith Stansell, copilot Tom Howes, and former US Air Force NCO Marc Gonsalves — were taken prisoner and spirited into the dense, trackless, triple canopy of the jungle. They would remain there, often chained together by the neck, for more than five years.

Otis’s narrative is a tapestry woven from many threads. On the one hand, it’s a cautionary tale: The botched rescue attempt by the hostages’ employer, California Microwave Systems, results in the crash of a second plane and the death of all those on board. (During the Americans’ captivity the company changed its name to CIAO, which didn’t help the hostages convince their captors that they weren’t CIA operatives.) This sort of corporate bungling — and how quickly the US government distances itself, at least in the early stages, from the whole mess — presages the controversy over US reliance on , Blackwater, and other shady operators in the Middle East and elsewhere.

Another riveting element in Otis’s tale is the initial hostage rescue attempted by the Colombian Army commandos, led by Lieutenant Jorge Sanabria, a portly career soldier with persistent dreams of Hollywood-style glory. Missing an opportunity to quickly locate and extract the hostages, Sanabria and his men are forced into a weekslong slog through the tangled undergrowth, dodging rebel patrols, poisonous snakes, and subsisting on wild monkeys and fetid water. Their fortunes change when one of the men, suffering from diarrhea, wanders out of the soldiers’ camp and discovers sunken plastic containers filled with millions of dollars: ill-gotten gain cached in the jungle by the FARC.

After a pledge of secrecy and solidarity by the troops, who decide to keep the money rather than report it, what ensues is a predictable farce of loose lips and greed, leavened by moments of humor. Commando Lenin Giraldo splurges on a sex-change operation, which proves to be the ideal disguise when his fellow thieves begin shooting their mouths off and getting arrested. Then, with most of the troops facing serious criminal charges, in a wonderful show of flexibility peculiar to the easy-come easy-go jurisprudence of Latin America, Sanabria and his out-of-shape troops are allowed to sneak back into rebel territory to pinpoint the rest of the money in exchange for clemency. It’s a lot like allowing Al Capone to rob a bank to pay his back taxes, and you can practically hear Otis chuckling as he writes, “their ground game was slow and methodical — three yards and a cloud of mosquitoes.”

It’s a big leap for a reporter moving from newspaper features to book-length narrative journalism and Otis makes the jump with a few stumbles. Although “Law of the Jungle’’ is blessed with several memorable characters, including the FARC’s “maximum leader” Manuel “Sureshot” Marulanda and Ingrid Betancourt, the beautiful, reckless, 40-year-old Colombian presidential candidate also kidnapped by the FARC, Otis stuffs his tale with too many lesser figures, bogging down the pace. Additionally, his style changes abruptly from a reportorial tone to wiseguy patter and back again, which is distracting.

Otis transcends these flaws with steadily rising action, which leads to the climax: the Colombian military’s elaborate, suspenseful, and daring ruse, aimed at tricking the FARC into giving up the hostages. When one of the commandos practices using his Taser on a rooster, you will know you have passed through the looking glass into the gonzo realm of Latin American realpolitik.

LAW OF THE JUNGLE:

The Hunt for Colombian Guerrillas, American Hostages, and Buried Treasure By John Otis