In his debut novel, Adam Haslett dishes up a smart, bitingly funny look at life in the Great Recession 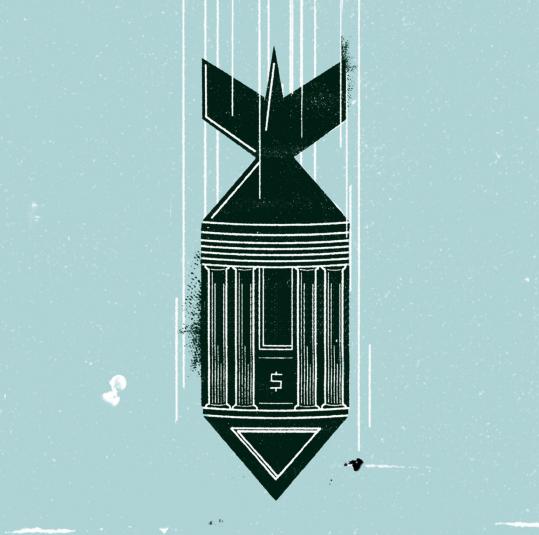 For the writer of this kind of novel, there are two obstacles. First is “The Great Gatsby,’’ a novel so artful and seemingly effortless in its evocation of New York and one of its many gold rushes that it makes every other similar subsequent novel seem clunky by comparison. The other obstacle is the desire to write something important, rather than something good. Such a book usually winds up being ponderous and self-satisfied. Take, for example, Joseph O’Neill’s recent novel “Netherland,’’ which, in trying to be “The Great Gatsby’’ of our age, ended up being more like the “Gunga Din” of our age, complete with its own anguished white man and his sacrificial cricket-loving subaltern.

Fortunately, Adam Haslett’s fine first novel “Union Atlantic’’ (on the heels of his excellent short-story collection “You Are Not a Stranger Here’’) manages to avoid these problems, first by setting the novel not in New York but mostly in Boston and its suburbs (this disarms the reader because we all know that as New York goes, so goes the world, but does anything truly important happen in Boston?), and second by rejecting portentousness and embracing froth. There’s nothing backhanded about this compliment: “Union Atlantic’’ is a smart, eloquent novel about our financial wrack and ruin, but it’s also a fun novel, notable for its ability to be both brainy and soap-dishy.

“Union Atlantic,’’ named after the novel’s fictional Boston bank, bounces back and forth among a number of characters, including: Doug Fanning, a conscienceless banker who presides over Union Atlantic’s rise and fall and who also cuts down a lot of trees and builds a McMansion in the Boston suburb of Finden; Charlotte Graves, an old lefty firebrand and fired high school history teacher who lives in her grandparents’ ancient house, which had been next to the aforementioned trees before Fanning cut them down, thus placing Fanning in Charlotte’s crosshairs; Henry Graves, Charlotte’s brother, who also happens to be the president of the New York Federal Reserve, thus placing Fanning in Henry’s crosshairs; and Nate Fuller, an almost-always high Finden High senior who lets his school work go after his father kills himself, which leads him to Charlotte’s house to be tutored in history, which then leads him next door to Doug’s house, where he is also tutored, but not in history. By which I mean not that Doug teaches Nate what it is to be a banker in America at the beginning of the 21st century, but that Doug has angry, mostly nonreciprocal sex with Nate. Which, as far as the novel is concerned, is more or less the same as being taught what it is to be a banker in America at the beginning of the 21st century. Oh, and Charlotte’s dogs talk to her - one in the voice of Cotton Mather, the other in the voice of Malcolm X, as Nate learns when the latter dog barks at him upon entering Charlotte’s house. “Stop being so paranoid, Wilkie!’’ Charlotte tells the dog. “He’s got nothing to do with Elijah Muhammad.”

So, as I said: frothy. But also exceedingly well written, especially in the chapters devoted to Charlotte and Nate. Charlotte is a happily complicated piece of work, politically right-minded but sometimes unpleasant and paranoid, as the right-minded tend to be - as Henry notes, “Here was his sister’s familiar recipe: well-meaning condescension leavened by faith in meritocracy and finished off with a dose of liberal apocalypse.” Charlotte is also, in her quieter moments, a beautifully-written character determined not to be merely tragic: “No school tomorrow to fill the day, as it had filled her life. And so the window opened, the bars came off, the passersby began to drift into the room . . . some of them quiet like generations past, others hot with the temper of dogs’ eyes. The membrane porous, the order shuffled. How arrogant, how wrong, for man to believe his animal senses caught the spectrum whole. An adventure time was, if you calmed yourself to its receipt.”

Nate only deepens Charlotte’s sense that there is hope yet for a life that is the opposite of Doug’s life. As for Nate, he’s smart enough to know that that choice - between Charlotte and Doug and all they represent - is not so easily made, which is perhaps why he gets high: because it enables him to maintain some distance from Charlotte and Doug as they court self-destruction.

It should be noted, though, that Doug is not quite as engaging as his fellow characters. He’s familiar - a cross between Tom Wolfe’s Master of the Universe and Bret Easton Ellis’s American Psycho - but worse than that, the writing devoted to him becomes journalistic as it tells us more about how banking works in the real world rather than how bankers might think in the novel’s world: “For years, Argentina had been a poster child for the International Monetary Fund . . . privatizing state-owned industries and public-sector utilities, mostly by selling them to foreign investors, and it had brought inflation under control by pegging the peso to the dollar.” One goes to the Sunday magazines or business sections of newspapers like this one for this kind of information, delivered in this kind of style. One goes to novels for something else. And these moments aside, Haslett’s “Union Atlantic’’ gives us that something else: a high-spirited, slyly astute exploration of our great bottoming out.

Brock Clarke is the author of four books of fiction, most recently the novel ”An Arsonist’s Guide to Writers’ Homes in New England.” His fifth book, the novel ”Exley,” will be published in fall 2010.