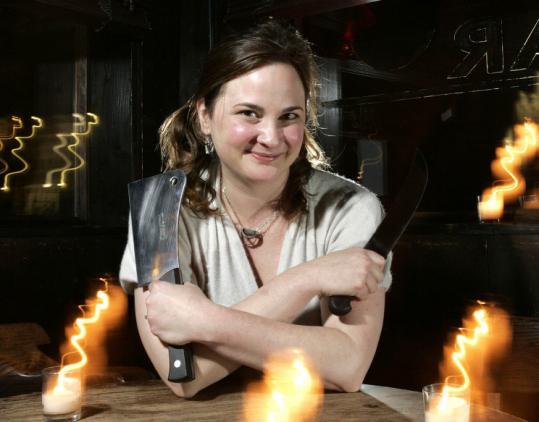 In “Cleaving: A Story of Marriage, Meat and Obsession,’’ Julie Powell writes about her affair and her fondness for S&M. (Carlo Allegri/ AP)
By Mark Kennedy Associated Press / December 2, 2009

NEW YORK - Julie Powell’s new book is not for the squeamish, in more ways than one.

It opens with her in the back of a butcher shop, flecked with blood and reeking of meat. She’s busy slicing a raw, slippery liver with a foot-long knife. By the end of the book, another internal organ - her heart - has been filleted: Powell dissects the pain caused by her two-year affair with an old college flame that sent her into an emotional tailspin and almost sunk her marriage.

It’s all a bit messy. What happened to our spunky blogger and best-selling author with a “sainted husband’’ who spent a year making Julia Child’s food, the young woman whose story made up half of the charming Nora Ephron-directed film “Julie & Julia’’?

Powell, in an interview at a coffee shop near her Queens home, admits readers may find her sophomore effort - titled “Cleaving: A Story of Marriage, Meat and Obsession’’ - a bit jarring.

“People coming from the movie ‘Julie & Julia’ and picking up ‘Cleaving’ are going to be in for some emotional whiplash,’’ she says, laughing. “I don’t believe it’s going to be a Nora Ephron movie.’’

While there are a dozen or so recipes, this is definitely not a cookbook. Instead, Powell reveals the pain of loving two men at once, of her fondness for sadomasochism, and even a bout of self-punishing sex with a stranger.

Powell, 36, began her affair in 2004 as she was finishing her first book, a time she writes she was “starry-eyed and vaguely discontented and had too much time on my hands.’’ By 2006, she had landed an apprenticeship at a butcher shop two hours north of New York City, which offered an escape from her crumbling marriage and a place to explore her childhood curiosity with butchers.

Why butchers? She says she’s always been attracted to their authority, machismo, and mysterious skills. “The way they held a knife in their hand was like an extension of themselves,’’ she says. “I’m a very clumsy person. I don’t play sports. That kind of physical skill is really foreign to me and I’m really envious of that.’’

In the book, Powell alternates tales of how she learned to slice pork loins and break down sides of beef with graphic details about cheating on her husband, who finds out about the betrayal and embarks on his own affair in response. The Powells somehow stay together, miserably.

“My goal is to stay honest and to stay close to the bone,’’ she says in the interview. “My actions were not particularly justifiable, but I needed to explore where they were coming from and what that was all about.’’