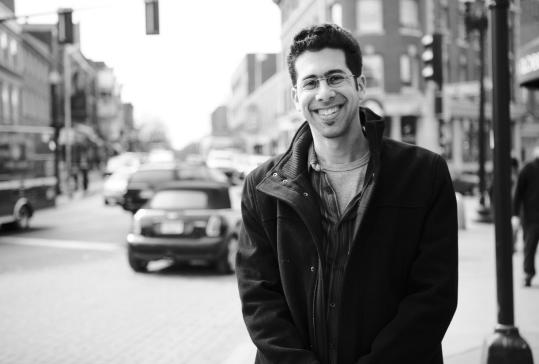 Though Mo Lotman is mindful of the influx of more upscale dining options, he says, “I think the cheap food in Harvard Square is still there, and always will be.’’ (Dave Green)
By Mark Feeney Globe Staff / November 25, 2009

A self-described “quirky individualist,’’ Mo Lotman has done all sorts of things: writing, acting, music, even comedy. This makes the Somerville resident an ideal chronicler of Harvard Square, a very quirky place defined by all sorts of things. Lotman spent 4 1/2 years researching and writing “Harvard Square: An Illustrated History Since 1950’’ (www.harvardsquarebook.com). Lotman’s profusely illustrated book shows a commercial district - a state of mind, really - in which continuity and change go together like ivy and brick. Nowhere is that more the case than as regards food. The square is inseparable from the names of such establishments past and present as the Tasty, Elsie’s, the Hayes-Bickford’s, Cardullo’s, Bartley’s Burger Cottage, and Rialto.

Lotman, 40, recently talked about Harvard Square and its eating history.

Q. Eating in Harvard Square didn’t used to be at all pricey.

A. When I think of food in Harvard Square I think of egalitarian. If you go back to 1950, your average food choice is a cafeteria. The square was full of places where you’d get a really cheap cup of coffee, toast, a burger, a milkshake - oops, frappe. I think the cheap food in Harvard Square is still there, and always will be. One of my favorite places is Sabra Grill, on Eliot Street, where you can get your basic falafel or a rollup. But now you have more midscale places, like Daedalus and Grafton Street.

Q. It was a long time before the dining became very fine.

A. The range of options is much larger than you’d have had in 1950. You had two French restaurants, Henri IV, which became the House of Blues, and Chez Dreyfus. Chez Dreyfus would have been your one upscale choice.

Q. If it was someone else’s treat, where would you want to eat out in the square?

A. I’ve only been to Rialto once, but I have to say the food was quite delicious. I’d probably want a hot chocolate at Burdick’s. That’s pretty amazing. I really like the food at Daedalus. You can’t top a Bartley’s burger. Oh, and I’d like to put in a little plug for Pamplona, too. It’s such a great little cafe, hidden away in the basement at 12 Bow St.

Q. Ice cream’s been an important part of square cuisine.

A. Definitely. I’m really bummed, actually: Herrell’s is closing. That was my favorite. I’d get the chocolate pudding ice cream. I have yet to taste a better flavor than that. Now, granted, there’s plenty of delicious ice cream there still: J.P. Licks, Lizzy’s. There were eight [ice cream places] at one time in the ‘80s, which is pretty remarkable.

Q. There’s been retail as well as dining.

A. There used to be markets: Sage’s, Brattle Market, an IGA. Cardullo’s - what a great place! - opened in 1950. It’s still very similar to how it was then. There’s certainly more of an emphasis on chocolate than there would have been then. But I had the pleasure of looking through one of their catalogs from the ’60s, and it was just fascinating. Lampreys, aspic.