Nader wrote the book (a novel!) on the super-rich 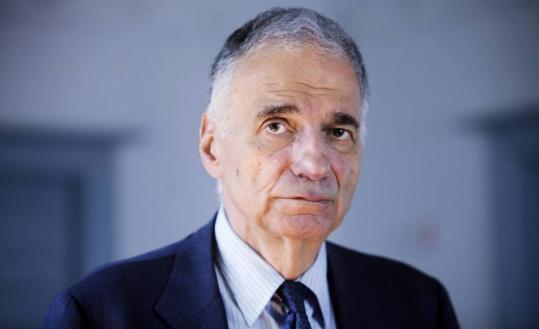 “Fiction is a way to liberate the imagination,’’ says Ralph Nader, who has written a book called “Only the Super-Rich Can Save Us!’’ (Jacquelyn Martin/Associated Press)
By Hillel Italie Associated Press / September 21, 2009

WASHINGTON - Ralph Nader, the consumer activist and corporate scourge, is saying nice things about the kind of folks you’d expect him to despise.

“Never in America have there been more super-rich people with relatively enlightened views,’’ says Nader, lean and hopeful at age 75, dark eyes aglow as he speaks at the offices of Public Citizen, the progressive research and advocacy group he founded nearly 40 years ago. “Not all the super-rich are craven greedhounds, dominators, and bullies. Some of them take on their counterpart greedhounds, dominators, and bullies.’’

Nader hasn’t turned conservative and he isn’t making this stuff up, although he is, in a way. After decades of speeches, articles, policy papers and policy books attacking corporations and politicians, Nader has turned to fiction. “Only the Super-Rich Can Save Us!’’ is more than 700 pages, and its heroes are a gang of 70-something plutocrats, from Warren Buffett and Ted Turner to Bill Cosby and Yoko Ono, who conspire to set off a progressive revolution.

The story begins in 2005, not long after Hurricane Katrina. A secret gathering is convened by Buffett at a Maui mountain retreat, where 17 wealthy people agree to take back the country they think has been betrayed. They give speeches, write books, organize community action groups. They infiltrate corporate boards of directors, stage demonstrations for the environment and better wages. They start a People’s Chamber of Commerce, advocate changing the national anthem to “America the Beautiful’’ and dream up a politicized parrot, “Patriotic Polly,’’ that becomes a media folk hero.

“Fiction is a way to liberate the imagination,’’ Nader says, “to see what could happen if 17 billionaires and super-rich people really put their minds to it, along with a parrot, and took on the existing business power bloc and the politicians in Washington who serve [it].’’

The super-rich name themselves “Meliorists,’’ believers that people can make the world better. They persuade the elusive Warren Beatty to run against Arnold Schwarzenegger for California governor. They conspire to force Walmart Stores Inc. to allow its workers to unionize. They push for universal health care. They start a new political party, dedicated to publicly financed elections. They are so quick, and clever, their foes can’t catch up.

The masses respond. Conservative smear campaigns fail. The corporations and the politicians retreat, powerless against the joy and fire of an engaged public. It all works.

“In the real world?’’ asked Victor Navasky, publisher emeritus of The Nation, the liberal weekly where some of Nader’s early writings appeared. “In the real world of satire I can imagine it, but not in the other world, the one we inhabit. But Ralph is a prophet; he has been right about so many things the rest of us couldn’t imagine.’’

“The cast seems a bit like People magazine, doesn’t it?’’ said author-journalist Alexander Cockburn, who supported Nader’s 2000 and 2004 third-party presidential campaigns and has frequently published his essays in Counterpunch, a left-wing newsletter Cockburn co-edits. “Good luck to Ralph. God knows how he found the time to write a 700-page novel. . . . But the use of billionaire’s money for anything other than malign purposes is extremely rare, as Ralph well knows.’’

Since the days of Karl Marx, revolutionaries have debated how much, if any, help from the top was needed to overthrow the ruling class. Nader thinks that the aging rich make for ideal instigators - wise and wealthy, beyond accusations of personal ambition, people of the highest achievement, yet also frustrated.

“They’re very demoralized as to the state of the country,’’ Nader says. “They play golf and they grumble and they’ve persuaded themselves that they’re powerless, which is absurd.’’

His book includes pages of detailed policy proposals, Nader’s common literary format, and draws upon public and personal observations. He believes each of the super-rich included is capable of the actions taken in his novel, citing as an example Turner’s well-documented interest in the environment.

Nader says his decision to write a novel was in part a response to the nonfiction books he had read in recent years. The corruption of politicians and financial institutions is diligently investigated and revealed. But only the problems are addressed; solutions either are not provided or are too dull to inspire.

“You can see it on TV,’’ he says, “when [liberal author-journalist] Bill Greider gets on ‘Bill Moyers’, for example, and he talks about the failure of the Federal Reserve and the Wall Street collapse and that’s all very interesting.’’