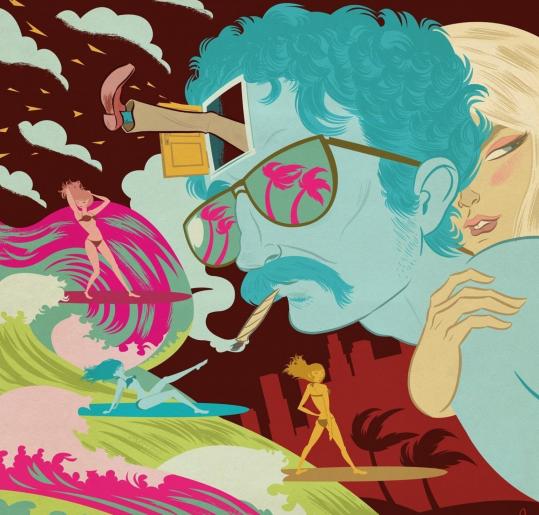 In a way, I suppose, you could say that Thomas Pynchon has gone on holiday to write a playful private eye story. But that would mislead.

For one thing, Pynchon’s masterpieces - “V.,’’ “Gravity’s Rainbow’’ - cannot be understood, or even got through, unless they are taken as you would take a fun-house ride. Only such a ride can achieve his graver destinations: destinies, in fact, and as consequential as can be credible in an era of disassociation.

For another, “Inherent Vice,’’ seemingly a confection of spoofs on its genre, belongs to a wider group as well: the personal-liberation mythology of the ’60s and ’70s. And here the spoofery is mixed with a requiem of sorts for a culture long gone. Not a romantic or sentimental requiem but, as with an epitaph, a haunted phrase carved in unyielding granite.

In the venerable tradition of Dashiell Hammett, Raymond Chandler, and dozens of successors, “Vice’’ begins when a beautiful woman arrives at the office of Doc Sportello, just south of Los Angeles. Sportello is hardly your hard-boiled detective. A weanling of the ’60s and pumped full of drugs and rock music, he is the psychedelic private eye. Standing for “location, surveillance, detection,’’ his business card reads LSD Investigations.

The woman, Shasta, a former lover of Doc’s, comes to report a plot to kidnap her new lover, a billionaire real-estate tycoon named Mickey Wolfmann. Shasta and Mickey disappear before Doc can do much about it: little more, in fact, than get himself knocked cold in a Wolfmann-owned massage parlor, get arrested for the murder of a Wolfmann bodyguard, then get quickly released and offered a job by the arresting detective to inform on the hippie-surfer community.

Known as Bigfoot, the detective is an indecipherable mix of crooked, nefarious, and conceivably angelic. The most complex of the book’s absurdly far-out characters, he has, among other things, a passion for frozen chocolate-covered bananas. He owns thousands of them: a payoff for overlooking a drug operation that processes banana skins into hallucinogenic powder.

We are only a little way into a plot best thought of as a state-of-the-art bomb that detonates, releasing dozens of bomblets that explode in turn to pierce the targets with thousands of tiny metal fragments. The reader is not just pulverized but virtually aerated. To spare my own readers, I make no attempt to put in order all the simultaneous adventures, encounters, and peculiar finds that Doc comes across. Not that I could.

They include the rescue of a struggling rock musician from a confederacy of right-wing vigilantes, serial encounters with a syndicate of murderous dentists known as the Golden Fang drug empire, bundles of counterfeit $20 bills bearing the portrait of a bug-eyed Richard Nixon, a set of pornographic neckties, a kingpin loan shark used by the Los Angeles Police Department to assassinate troublesome radicals, and a whole lot besides.

Ostensibly these are all connected. But Pynchon, influenced by and going far beyond the famous plot intricacies of Chandler’s “The Big Sleep,’’ deliberately wields his dizzying shower of connections so that what they add up to is a supreme disconnection.

It can be exhausting, like a masquerade party where the continual procession of extravagant arrivals eventually palls. Quite unlike the classic thriller, whose mounting suspense rides upon mounting belief, we are instructed: Don’t believe.

So why are we here? The doubt breaks in, dispelled before long by Pynchon’s deadly invention and the wit and unique lilt of his writing. An example of the last, relatively minor: Of his all-white beach community, where a lone black homeowner was burned out, Doc relates that a small park has replaced the razed property. Now rich kids gather there to do sex and drugs, “depressing their parents, though not property values particularly.’’

What Pynchon is after with the prodigal absurdities of Doc’s adventures is not really parody, but something larger. They are a way to enter into a time and place of extravagant delusions, innocent freedoms, and an intoxicated (literally) sense of possibility. And to do it without sententiousness, to write in psychedelic colors disciplined by a steel-on-flint intelligence (thus the incandescent sparks).

He writes with a rich mastery of the era’s detail: rock groups now forgotten, odd hangouts (a Japanese greasy spoon that offers the best Swedish pancakes in Los Angeles), surfing, motorcycle brands, and the generosity of forbearance among the ’60s generation.

And he writes as recorder of the hardening that began in the early ’70s, the era in which the book is set: the industrial commercialization of rock spontaneities; the blown minds after the mind-blowing and fear that withered the flowers after the Charles Manson killings.

As epigraph, Pynchon quotes triumphalist graffiti from the buoyant Paris youth uprising of 1968: “Under the paving stones, the beach!’’ The illusion, that is, that the stones hurled at the lines of French police would lead into a time of splendor and freedom.

The hopes are recalled, reconstituted, and chastened in “Inherent Vice’’ and so are the ’70s shadows that overtook them. As for the beach, in California, it is restricted in some places, turned tawdry in others; though with beauty enough along large stretches, surfboarding still, and lots of bicycling.

A haunting lyrical passage ends the book. After a succession of cheerfully suspect happy endings, Doc is caught in one of the fogs that occasionally blanket and paralyze the Los Angeles freeways. What Pynchon does with the fog recalls nothing so much as what Joyce did with the snow - “general over Ireland’’ - that ends his imperishable story, “The Dead’’ and expands it into universal desolation.