The new book by California novelist Jane Vandenburgh is not, mercifully, a history of sex in the 20th century, pocket or otherwise. Indeed, the central theme of this intermittently sparkling but uneven memoir is not sex at all, but how a girl who loses her charismatic, troubled parents to suicide and madness fights her way to a happier adulthood.

The book's first chapters paint a shimmering portrait of a family on the brink of collapse. The middle of three "blond, tousle-haired beach rats," young Jane runs wild around her family's modest house in a Southern California beach town. Her oblivious but affectionate parents are good-looking, creative, and outwardly successful: He is an architect, she an artist and illustrator for Disney. Maggie and John are world-class drinkers, banterers, and psychoanalytic patients - dysfunctional, yet glamorous.

Both, however, are semi-estranged from their prosperous families - who are "very high up," as Maggie puts it, "in all the la-dee-da crap" - and barely clinging to conventional domestic life. Maggie downs beers at her easel, attacking 1950s mores with foul-mouthed wit; John, a gentler presence, commutes to his firm by day and secretly haunts the city's gay bars by night. Arrested repeatedly on charges of vice, he is finally sent to a psychiatric hospital. Then, only pages into the book, when Jane is 9, he commits suicide. Maggie's mental state quickly deteriorates, and she soon loses custody of the children.

Vandenburgh vividly captures the strangely idyllic yet disturbed world the family shares and the double loss that breaks it apart. Her fierce love for her parents, who could "neither abide the normal world - the house, the marriage, the children - nor exit it entirely," and grief amid the family's disintegration come surging off the page. As Maggie delivers the children to her own parents after her husband's death, Vandenburgh writes simply, "They are outside waiting for us. She gets out of the car and falls down in the middle of the street."

Then, partway through high school, we are abruptly catapulted into Jane's future. Compelling family narrative gives way to episodic musings on marriages, friendships, politics, lesbianism, poet Gary Snyder, and being hit by a car. It's nice to hear that an adoring second marriage (with Jack Shoemaker, publisher of this book) put Vandenburgh's ambivalence about relationships to rest. But we learn in just one sentence that she was ultimately "thrown out of my more extended family for the usual infractions," and in another that her younger brother became homeless and disappeared. It's as if someone stole the second half of a novel we were reading and replaced it with random snippets from the sequel.

Vandenburgh draws the book to a graceful close, with a tableau of several generations walking in Central Park. That we care what happens to this family testifies to the skill of the book's beginning. But writing a life demands as much rigor as any other tale, and the disappearance of order halfway through Vandenburgh's book leaves us, at the end, still hungry for the rest of the story.

Amanda Katz is a writer and editor who lives in Provi-dence. 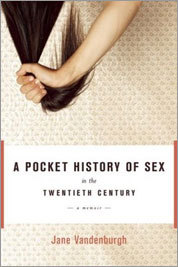