A history of the Internet phenomenon, from uncertain enterprise to part of the Murdoch empire 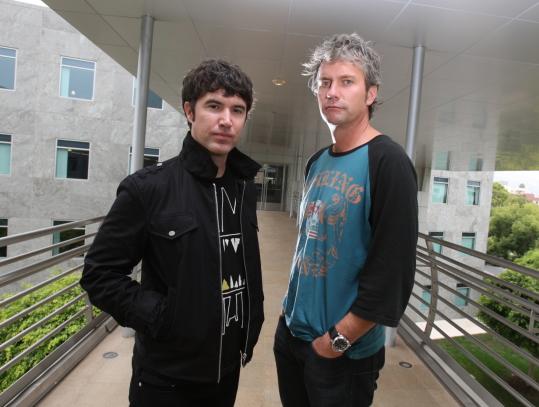 For 50 years, geeks have ruled the technology industry. Now we're seeing the rise of a new techno-force: twerps.

This shift in antiheroes bodes well for readers, if "Stealing MySpace" is any indicator. Twerps, though less brilliant than geeks, are also less bewildering - and less supercilious. Their foibles make good cocktail talk. Their triumphs seem like things normal people could achieve.

As author and Wall Street Journal reporter and editor Julia Angwin tells us, MySpace rose because "the time was ripe for a new kind of Internet giant to emerge - one where human creativity was at the center of the experience, not technology." In fact MySpace succeeds despite its technology, and almost despite itself. Much of its early life, as detailed in the book, is filled with what, in a polite newspaper, can only be called twerpery.

Before founding MySpace, Chris DeWolfe and Tom Anderson are young, immature, and irresponsible (a polite way of saying twerps), doing things like selling adware programs and dabbling in Internet porn. Even after starting MySpace, they choose not to leave (later Intermix), the sleazy company they wind up working for, leaving it with a majority interest in MySpace. DeWolfe makes sure MySpace's deal with Intermix includes an out, an escape clause (in the book, it has a crude name), in case MySpace succeeds. That clause allows Rupert Murdoch's to buy MySpace for a steal, $580 million (Intermix included). By comparison, YouTube, a much smaller site, would sell months later for $1.65 billion, and Facebook, MySpace's main rival, has been valued at multiple billions.

But when that clause was signed, MySpace looked unlikely to succeed. DeWolfe had run a desperate little company called ResponseBase that, while not quite a spammer and not quite the worst of spyware vendors, would be missed by no one when it shut down. Anderson had drifted, playing in bands and trying to set himself up in Asia. He started working from home after a pretty colleague rebuffed a tentative advance and then dished dirt. Anderson, who perhaps has the most "friends" of anyone on the World Wide Web, is, in real life, antisocial.

Anybody who thinks that many Internet companies are really just a virtual joke perpetrated on the economy, cousins to the fake wealth built on fake financials and fake home values that led to our ongoing economic unraveling, will find fodder in this book. Yet it's strangely fascinating to watch a bunch of Internet scavengers create the first hugely successful online social network, become multimillionaires and even media powerbrokers. It defies reason.

Except it doesn't. DeWolfe and Anderson didn't have to be technical geniuses to make a social network go. As with many business ideas, it isn't those who invent them or first try to commercialize them who win - it's those who stumble along at the right time and give the idea the right twist. The MySpace founders were late to the social network party, but they got there as broadband access became widely available for the first time. They weren't capable of building clever network algorithms, like the smarter-than-you techies at Friendster, the site they were mimicking. Instead, Anderson and DeWolfe figured out that people came to social networking sites to express themselves, and they mostly let their users do what they wanted. They weren't very technical - the site crashed constantly. But they would steal ideas from anywhere, add them quickly, and were just as quick to dump those that didn't work (or that went over the line into actual intellectual-property theft).

So DeWolfe and Anderson suddenly were in the right place, at the right time, and MySpace was circled by and News Corp., archrivals looking for an Internet centerpiece. Angwin lets us eavesdrop on the deal-making process. We see Murdoch pursuing MySpace like an elephant in heat, leaving rival mogul Sumner Redstone practically cringing. "There's no chance of outbidding him!" Redstone fumes at one point.

Angwin's portraits of the principals benefit from the same use of well-lighted detail as an Edward Hopper painting. She does deft work on the deal's aftermath, too, as the Web blossoms into a mainstream medium, helped along by MySpace. We also see the site's growing pains, particularly around its technology.

In fact, this book would have been a happier tale for MySpace, and perhaps Angwin, if it could have been published closer to when the story ends, in April 2008. At the time, MySpace was by far the biggest social network, in fact the most-trafficked Internet site, with rapidly growing revenue and even profit. Now, MySpace has been muted by the rise of Facebook, which boasts tens of millions more visitors.

As MySpace's growth flattens, Facebook has become the darling of the social media world. Of course, Facebook is also a more conventional Silicon Valley success story, its potential tantalizing, if largely unrealized.

Facebook may have stolen MySpace's thunder. The geeks may take the Web back from the twerps. But it seems more likely that "Stealing MySpace" marks a turning point. The Web, following electricity, radio, the airplane, and other great technological innovations, will no longer be dominated by engineers.

Michael Fitzgerald is a freelance writer in Millis. E-mail him at michael@mf fitzgerald.com.

STEALING MYSPACE: The Battle to Control the Most Popular Website in America