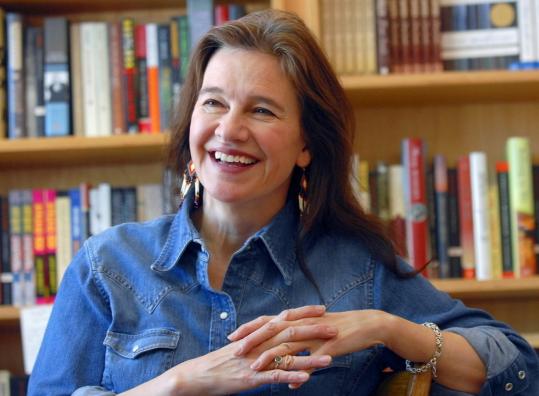 It's 1932, and a homeless young widow brings her three children to the fair, where they line up to see the Great Omar, "Aeronaut Extraordinaire." When the barnstormer asks if anyone wants to go up in the biplane, the mother suddenly elbows through the crowd and, "without a backward look," climbs aboard, her 11-year-old daughter, Mary, watching helplessly as Omar flies "steadily away from the fairgrounds with my mother."

Because this is Louise Erdrich's heartrending fictional world, Mary will now make her way alone in the world, with no belongings other than her mother's locked jewelry box. And because it is Erdrich, we will hungrily read "The Blue Velvet Box" to find out what happens to Mary, to feast on the delicious prose, but, most of all, to know what's in that box.

There are dozens of such audacious and surprising boxes - metaphoric and actual, matter-of-fact and mythic - in "The Red Convertible," Erdrich's rich collection of short stories, including six previously unpublished, culled from 30 years as one of America's most distinctive fictional voices. For readers new to Erdrich - the lyrical Ojibwe Indian and German-American writer - this may be an ideal sampler, 36 affecting and inventive stories that dance in and around the Faulknerian world she's created out of reservations and border towns in North Dakota and Minnesota.

For fans, most of these pieces will be familiar. In fact, a collection of Erdrich stories presents something of a dilemma, since most of her 11 novels are likewise composed of overlapping stories, featuring interweaving characters, told from multiple points of view, moving in and out of time until a kind of novelistic tapestry is achieved.

So it's a bit like reverse alchemy, being asked to consider as independent short stories the various moving parts from such novels as 1984's "Love Medicine," in which she established her style, or last year's gorgeous "Plague of Doves."

Erdrich addresses the role of these "germinal" stories in a short preface to "The Red Convertible," in which she describes finishing these short stories over the years and assuming she was done with them, only to have some of the stories "gather . . . weight and complexity" and - "set whirling" in a kind of lyric snowstorm - grow into novels.

Like the abandoned girl in "The Blue Velvet Box" (taken from her second novel, "The Beet Queen"), most of these germinal stories turn out to be strong and resourceful enough to make it on their own. The best ones have the inexplicable fullness and beauty that exist in great short fiction: In "Saint Marie" (from "Love Medicine"), a young Indian girl must deal with religious fervor, the temptations of Satan, and the attentions of a nun more frightening than either; in "Knives" (also from "The Beet Queen") a traveling knife salesman begins an unforgettable courtship with the line "You're not pretty"; and in "Shamengwa" (from "The Plague of Doves") a young fiddle thief is sentenced to apprentice with the tribal elder whose mystical instrument he's stolen.

The most remarkable of these stories, loosed from its larger context, might be the hypnotic "Father's Milk" (from the novel "The Antelope Wife"), in which a cavalry soldier bayonets an Ojibwe woman to death, then runs off with what he assumes is an abandoned and starving baby. To get the howling child to calm down, the soldier eventually presses her to his chest and nurses her. He ends up raising her as his own.

Lactating soldiers, sprinting blue Satans, and vengeful tornadoes are just the sort of matter-of-fact magic that Erdrich routinely trades in, and these flourishes work so well because they are so firmly grounded in a world of broken-down cars, Quonset-hut bingo halls, and reservation answering machines ("The number you have reached has been disconnected").

Presented mostly chronologically, in the order in which they were written, Erdrich's stories show a writer growing in stylistic range and courage, even as she returns to trusted themes and families; there's always another Kashpaw or Nanapush just around the corner, always another fearless attempt to describe love or redemption amid the butcher shops and Catholic churches.

Many of these stories first appeared in magazines, most often The New Yorker. As with recent big, career collections by Amy Hempel and Tobias Wolff, it's reassuring how often the O. Henry Prize and "Best American Short Stories" seem to get it right - there are seven such honored stories within Erdrich's book, and they're all great examples of the form.

As one would expect in 30 years of writing stories, there are a few whiffs here, too, pieces that feel undeveloped or fragmentary. Also, as one might expect in such a collection, the previously unpublished stories feel mostly like lesser work. But even within these stories there exist Erdrich's poetic sentences and humane sensibility - and always another surprise on the next page.

And so, at the end of "The Blue Velvet Box," Mary stares into the box and seems to sum up the way Erdrich works, all of that comic-tragic, high-low straightforward magic in all of those germinal stories, coming apart, together and apart: "I could see a pattern to all of what happened, a pattern that suggested completion in years to come. . . . It is opposites that finally meet."

Jess Walter is the author of the 2006 National Book Award finalist "The Zero" and "Citizen Vince," winner of the Edgar Allan Poe Award for best novel.

THE RED CONVERTIBLE: Selected and New Stories, 1978-2008 By Louise Erdrich