He's got a whale of a tale to tell 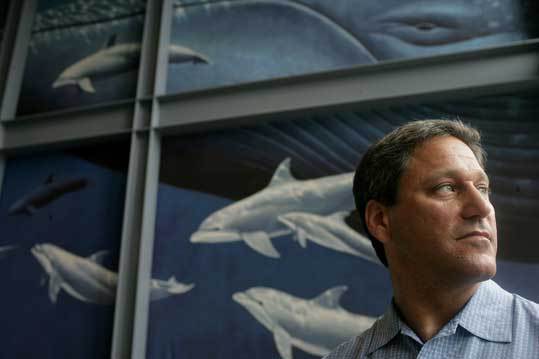 Praised by reviewers as the first readable modern account of a great American enterprise, Eric Jay Dolin's "Leviathan: The History of Whaling in America" tells a very New England story.

Whales, prized for the oil used to light lamps in Europe since the Middle Ages, attracted the attention of New Englanders from the time of the Pilgrims. Hunting the lords of the deep grew steadily into a major industry in the 17th and 18th centuries. At its peak in 1853, American whalers killed and harvested 8,000 whales, according to Dolin.

Whaling made many New Englanders wealthy. New Bedford, the center of the industry in the 1850s, was regarded as "the wealthiest city in America," Dolin states, before other products began challenging whale oil's dominance in the decades following the Civil War.

Dolin, 46, who has a PhD in environmental policy and planning from MIT and has written a half-dozen books, will speak Tuesday at the historic Winslow House in Marshfield. The program will launch the Winslow House's summer series of Coffee Hour Lectures.

The house's director, Mark Schmidt, said the book caught his attention at first glance. "If it trips my trigger," Schmidt said, "I think it may do that for somebody else, too."

Dolin grew up in Long Island and Connecticut and always loved the ocean. An early focus on marine biology gave way to environmental studies, and his doctoral dissertation focused on the role of the courts in the cleanup of Boston Harbor. His books have been on subjects in nature and conservation that interest him, including the snakehead fish, national wildlife refuges, and the federal Duck Stamp Program which raised money for early conservation efforts.

His work on Boston Harbor was published under the title "Political Waters: The Long, Dirty, Contentious, Incredibly Expensive but Eventually Triumphant History of Boston Harbor - A Unique Environmental Success Story."

"That's my background," Dolin said recently on his choice of subjects, "and I love that stuff."

While his books have information to interest a specialist, Dolin said, they don't have an academic tone. "I write for somebody like me," he said.

That approach worked for reviewers. The said the book succeeded admirably in telling the story of one of "the strangest industries in American history."

Nathaniel Philbrick, who wrote about a disastrous whaling expedition in "The Heart of the Sea," called "Leviathan" "the best history of American whaling to come along in a generation."

In the 17th century, the Pilgrims simply copied the Indians' practice of "drift whaling," harvesting whales that stranded or died and floated to shore. But given the strong international demand for whale oil for lighting, New England ship builders began turning out the broad-beamed, 100-foot-long "floating factory" whaling ships that searched the globe for whales. Whaling expeditions began to average four years in length. By 1846, America boasted 735 whale ships.

Whale oil burned cleanly, and gave good light. "Nobody back then had an environmental thought," Dolin said. "Whales were just profit centers."

But while whaling made some ship owners and captains wealthy, the reality of working on a whaler was "miserable, not romantic at all - grueling, tiring, boring, often dangerous, and badly paid," Dolin said.

Since crew members were paid a share of the profits, a bad voyage resulted in little or no money.

Tuesday's book talk at the Winslow House, 634 Careswell St., Marshfield, begins at 10:30 a.m. Tickets are $7. Reservations can be made by calling 781-837-5753 or through winslowhouse.org. Light refreshments will be served.