The peripatetic V.S. Naipaul surveys alienation, exile, and the writing life in his new collection 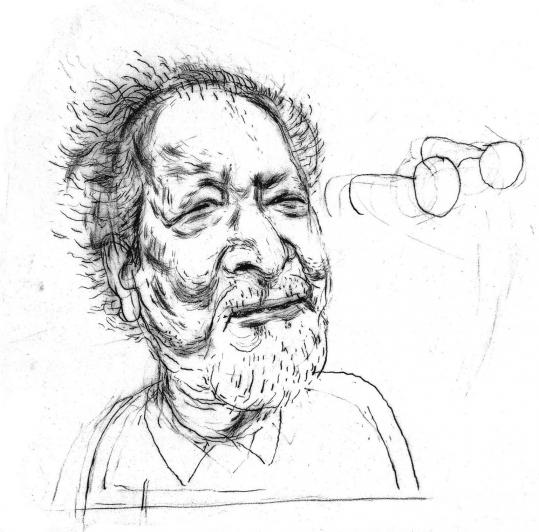 "All my life I've had to think about different ways of looking," V.S. Naipaul tells us at the start of yet another footsore stage (the 29th, including novels, essays, memoirs, and ruminations) in his lifelong trek to locate an estranged self in an estranging world.

The Trinidad-born writer is 75, a Nobel Prize winner, and as touchy, coldly aggrieved, and solipsistic as ever. And as always, just as one might give up on him, come moments in this new collection when self-absorption, afflicted by genius, turns into a visionary vantage over the wider human condition.

Alienation, of course, is common table salt for many writers. Naipaul has taken it from amorphous inner complaint to make it a true journey: an Odyssey with himself as both Odysseus and Homer but without a return home.

The five pieces in "A Writer's People" include two about India, one about Flaubert, and one about the late Anthony Powell and English literary life. A fifth, and the most interesting, is about trying to forge a writer's identity while escaping the constriction of a small island and seeking to make his subject the larger world - thus the "different ways of looking."

There are no strict boundaries among the five. Everything spills over into everything else, sometimes without transition and to the reader's perplexity.

To be more accurate, it is Naipaul himself and his tormented and peripatetic writer's search that does the spilling over. And it is his lifelong journey away from Trinidad that is the heart of the collection.

He portrays his chilly writer's imperiousness as a teenager in Port of Spain, ignoring the struggling lives of his parents and grandparents. "The people around me lived in their own way; they were equipped for pain. I lived in my own way, trying to do a diary, looking hard for things to say about myself, and in that search missing some of the big events around me."

He evokes the tiny Trinidadian artistic community, "pools of vanity that came and went." He writes sardonically of the attempt to find an authentic island culture in a black dance group and steel-drum bands: "With these rare things, it was felt, local people would no longer go empty-handed into the community of nations; they would have something of their own to proclaim."

He writes of the thin material offered by the Caribbean islands with their British colonial overlay, each isolated from the others, with the sea as "a great divider." (He takes no proper account of the richer Creole culture of the French islands.)

"It was something we with literary ambitions from these islands all had to face: small places with simple economies bred small people with simple destinies. . . . They didn't give a fiction writer or a poet much to write about; they cramped and quickly exhausted a talent which in a larger and more varied space might have spread its wings and done unexpected things."

He writes of the poet Derek Walcott from St. Lucia, another Nobelist, whose success he deals with first by praising, then by eviscerating. He grants the beauty of his early poems - "the sun's brass coin in my cheek" - but goes on to develop a quarrel with it.

Walcott, Naipaul argues, could only cope with the cultural emptiness of the Caribbean, beauty apart, by factitious means: adapting European literary models to the islands, and imposing racial and religious themes in a way calculated to appeal in the United States and Europe.

The quarrel seems more than literary. Descended from Indian immigrants, Naipaul knew not just the isolation of a constricted island culture, but additional isolation as part of a minority within it. The East Indians have mainly lived, at least until recently, in artistic as well as political isolation from the African-descended majority, to which Walcott belongs.

At 18 Naipaul took a scholarship to Oxford, and four years later began to write. It was a hard start. Apart from feeling a stranger, there was the chasm to be crossed from university writing, "full of other men's ideas and language to . . . writers' writing, something personal, with authority, something you might imagine printed in a book."

Nobody has described the chasm's pain better or more acidly. "All that my setting up as a writer required was a table, an exercise book, a pen (I would have preferred a typewriter), and a small acting talent, so that I could think of myself as a writer and stay at the table."

Six months of lofty scribbling, then a crisis of silence, then a gritty going back to real memories that eventually led to his first success, "A House for Mr. Biswas," which mined his family's life in Trinidad. And, for Naipaul, mined out the island, setting him off on 60 years of acerbic and often brilliant inquiry through Africa, India, South America, and Britain itself, where he lives.

There are other themes in "A Writer's People," among them an uncharacteristically affectionate portrait of his friendship with Powell (coupled with a characteristically devastating, and shrewd, critique of Powell's many-volumed "A Dance to the Music of Time"). But at the end he returns, in a sense, to Mr. Biswas.

He goes after unnamed younger Indian novelists (perhaps aiming at Jhumpa Lahiri, Arundhati Roy, Kiran Desai) for writing what he sees as narrowly realist or magical realist family stories. "Since no writer can have two extended families, these novels appear to be rationed, one per writer," he remarks.

Waspish and even plain wrong; though, true to Naipaul's ability to engender the provocative out of the provoking, he does make a larger argument: the relatively small impact such writing has upon Indian society, however much acclaimed abroad.