Weighing the evidence, Nicholson Baker contends that WWII was hardly a 'good war' 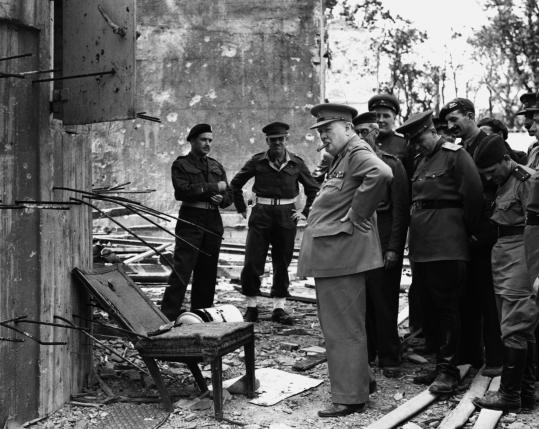 Winston Churchill, shown above in the ruins of Berlin's Chancellery, is portrayed in "Human Smoke" as eager for war. (Hulton-Deutsch Collection/Corbis)
Email|Print| Text size – + By Glenn C. Altschuler March 9, 2008

On Dec. 7, 1940, the Air Ministry of Great Britain sent a secret memo to Prime Minister Winston Churchill. One hundred planes, the ministry maintained, could deliver "the most destructive possible bombing attack against a selected German town." After 10 sorties of incendiary bombs caused "widespread uncontrollable fires," the pilots would drop high-explosive devices "fused for the best destructive effect" on buildings, gas and water mains, and electric cables. The government authorized the operation to begin as soon as weather permitted. The scruples of Cabinet members against targeting civilians "have been overcome," secretary John Colville observed.

With this decision, and many others like it, Nicholson Baker claims, England and the United States lost the moral high ground. To save civilization, they savaged it, by using their enemies' tactics and committing crimes against humanity. The author of seven novels and three works of nonfiction, Baker believes that World War II was anything but a "good war." The heroes of "Human Smoke," he says in an author's note, are the pacifists of the 1930s and '40s. Parodied, pilloried, and prosecuted, these dissenters "tried to save Jewish refugees, feed Europe, reconcile the United States and Japan, and stop the war from happening." Although they failed, he writes, they were right.

Baker's methodology is idiosyncratic - and infuriating. Drawing on newspaper and magazine articles, speeches, diaries, and memoirs, he selects hundreds of vignettes, arranges them chronologically, and presents them, seriatim, as a chronicle of the origins and early history of World War II. He documents, with anguished eloquence, the horrors modern warfare visited on innocent men, women, and children, and the ghastly moral compromises it entailed, for democracies as well as dictatorships.

Baker adds few comments of his own to his narrative. He provides no context - no analysis of the political and military options available to the Allies or the likely impact of negotiating a cessation of hostilities with Germany or Japan. His passionate antiwar message emerges from the incidents he chooses to include, and his sense that anyone with half a heart will sympathize as Christopher Isherwood exclaims, "Oh God, must we always keep smashing things?"

This approach allows him to endorse or excoriate - at least implicitly - without having to qualify or defend any assertions. His portrait of Churchill, for example, is a caricature, designed to expose the prime minister as bombastic, bigoted, and bloodthirsty. Eager to imprison dissidents and enemy aliens (including Jews between 16 and 70, the manager of the Piccadilly Hotel, the head chef of the Cafe Royal, and two clowns in the Bertram Mills circus), Churchill ordered "retaliatory bombing" before English cities were attacked. He answered Hitler's peace offer with more air strikes. Baker also recycles the baseless canard that Franklin Roosevelt deliberately exposed the Pacific fleet at Pearl Harbor to attack by the Japanese to build a consensus in the United States for a declaration of war.

In "Human Smoke," pacifists get the last word, even when their arguments beg to be rebutted. A friend of philosopher Cyril Joad, Baker indicates, insisted after the invasion of Poland that Neville Chamberlain should have resumed negotiations with Hitler. The prime minister should have recognized that war always caused physical and moral mutilation and deceit. And that it was not rational to fight to stop nations from imposing their will on others by force. To Joad's suggestion that Hitler couldn't be trusted, "D" replied that if the fuhrer violated an agreement, nothing would be lost: "If the worst comes to the worst, we can always begin the killing again." The philosopher, Baker writes, "found he had no ready answer to that."

One is left to wonder whether Joad - or Baker - shared Gandhi's view that if there was a difference between German and British imperialists "it is one of degree." Or his equanimity at the prospect of the Nazis occupying England. If the island were overrun, the Indian pacifist proclaimed, the English people should give up their material possessions but not their souls or their convictions. If German soldiers "choose to occupy your homes, you will vacate them. If they do not give you free passage out, you will allow yourself, man, woman, and child, to be slaughtered, but you will refuse to owe allegiance to them."

Given the political realities of the 1930s and '40s, these proposals seem, at best, naive. But, as Baker demonstrates, pacifists were prescient in warning that with the saturation bombing of cities 20th-century Western nations crossed a Rubicon. In September 1939, Roosevelt denounced the bombing of unfortified centers of population as "inhuman barbarism." He asked Germany, Italy, Poland, France, and England to reply immediately to his demand for new rules of engagement. Less than three years later, Roosevelt authorized the very practices he had condemned. In 1945 his successor sent the Enola Gay to drop nuclear bombs on the citizens of Hiroshima. In this sense, World War II did mark "the end of civilization."

Pacifists were not alone in deploring the terror tactics of modern warfare. But, overall, their approach would not have deterred Adolf Hitler, saved the Jews, or fed Europe. Despite the human smoke and the catastrophic carnage, World War II was the least worst option, a "good war" that could - and should - have been fought differently.

Glenn C. Altschuler is the Thomas and Dorothy Litwin Professor of American Studies at Cornell University.