In moving stories, the Iraq war haunts the families of US soldiers

I first heard Benjamin Percy's short story "Refresh, Refresh" read with great compassion by Ted Marcoux on National Public Radio's "Selected Shorts." My husband and I were stunned by the precision of Percy's writing and the brilliance of its conception. This story, first published in Paris Review and winner of several prizes last year, is already famous and may become as emblematic of the Iraq war as Tim O'Brien's "The Things They Carried" is of Vietnam or Walt Whitman's poem "Come Up From the Fields, Father" is of the Civil War.

What makes it different, though, is that it deals neither with the soldiers nor with parents who have lost sons, but with the next generation, the sons of those called up to fight from the National Guard in the small fictional town of Tumalo. As the narrator, Josh, says: "In March they shipped off for Iraq. Our fathers - our coaches, our teachers, our barbers, our cooks, our gas-station attendants and UPS deliverymen and deputies and firemen and mechanics - our fathers, so many of them, climbed onto the olive green school buses and pressed their palms to the windows and gave us the bravest, most hopeful smiles you can imagine, and vanished. Just like that."

The boys make contact with their fathers through e-mail, and find themselves pushing their refresh buttons, often in vain. Thus, "Our fathers haunted us. . . . Our fathers, who had been taken from us, were everywhere, at every turn, imprisoning us." Before long, almost as a way of identifying with their lost fathers, the boys are impelled to commit their own kind of violence, and their target becomes the recruitment officer.

This devastating story plays out in surprising yet utterly convincing ways, and in it you get a glimpse of what life is like not only in the high desert of Oregon (where Percy was brought up), but in rural towns all over this country - where life chugs along in a kind of orderly boredom and people spend their leisure time in the wild, hunting and fishing.

In many of the subsequent stories, fathers loom as large as the shadow of the Iraq war - fathers who have left their families and gone off, sometimes with women, sometimes not, to make different lives. Those left behind experience loneliness and loss. "When the Bear Came" is narrated by a young man filled with such anger and longing that we are almost breathless with pity and fear as we read. In other stories, fathers take over. "Crash" examines a young marriage tragically cut short, and "The Killing" shows how a father's love can play out in a shocking, totally logical way. In "Somebody Is Going to Pay for This," which examines friendship in a moving and original way, there are no fathers but just two young men trying to figure out the meaning of life. In these stories Percy melds the weather and landscape and his characters' feelings to stunning effect.

There are other stories, however, that work less well, stories that read more like adolescent fantasies of blood and sex and cruelty (complete with far too many figures of speech involving snakes) than of anything approaching real or even convincing fictional life. In these stories we are stuck in relentless rain and snow and cold, or horrific lightning and thunder, which is clearly a metaphor for lives where the sun never seems to get through. And the characters are more ideas than people. Surely there are spring and summer, even in Oregon, and surely there are kindness and tenderness or even common sense and self-awareness.

Still, Percy is a talented writer whose best work already achieves an astonishing intensity. One can only hope that when this war finally ends, he will turn his eye outward and give us fiction that has wider breadth and all the compassion he shows in his finest stories. In the last story, "When the Bear Came," he seems to be telling us he knows this.

Anyone interested in fresh American fiction will be awaiting his next work with great anticipation. 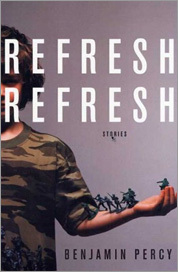