Confessions of a stand-up guy 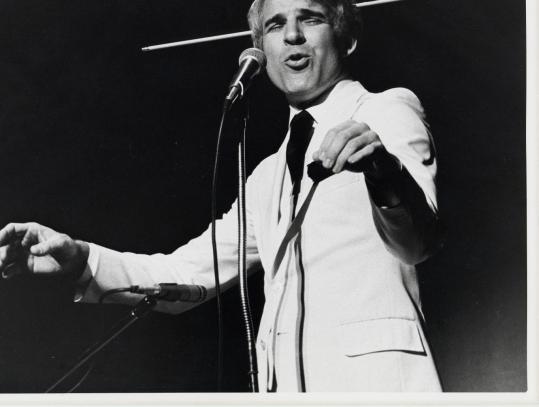 Some stand-up comics reveal themselves by exploiting their own private fears, disappointments, and frustrations for public laughs. As a stand-up comic, Steve Martin got his laughs - and eventually great fame - by keeping an ironic distance from his audience, concealing his offstage self while his intelligence stealthily informed his wacky medley of jokes, props, banjo tunes, and apparent non sequiturs.

In his memoir "Born Standing Up," Martin's goofiness seems long gone, the intelligence not hidden but evident, non sequiturs replaced by linear and focused narrative, and irony supplying a distance both thematic (particularly with his father) and factual (when he withholds certain details about his life). The result is an entertaining and insightful story about the world of stand-up, showing the transformation of a fledgling entertainer into a comic while subtly - and ultimately dramatically - revealing Martin the person.

At first, Martin sounds like a parody of an ascot-wearing, cog-nac-sipping memoirist ("One can have, it turns out, an affection for the war years" and "In the end, I turned away from stand-up with a tired swivel of my head"). Fortunately, he then begins to chronicle a "course [that] was more plodding than heroic" with "incremental steps studded with a few intuitive leaps."

Those steps begin at age 10, when he gets a job selling guidebooks at Disneyland. He moves up there and then at Knott's Berry Farm, learning skills such as rope tricks, magic, juggling, and banjo playing as well as the more elusive truths of acting and comic timing, even planting the seed of his famous catchphrase, "Well, excuuuse me!"

These sections bring the reader into these moments and show the pieces that Martin fitfully, eventually pulls together into his act. Martin relates the comic's usual early (and sometimes later) challenges of venues, audiences, and self - such as the insecurity that leads a comic to focus on an anomalous negative ("one sourpuss could send me into panic and desperation").

Yet the bookends for this story are his family: smoldering father, submissive mother, and older sister. While his connection to his sister is slight and that to his mother loving, his relationship with his father is either difficult or absent. Once Martin leaves home, he leaves them behind on these pages just as he did in life.

But before he left, he writes, he "was incurring psychological debts that would come due years later in the guise of romantic misconnections and a wrong-headed quest for solitude." Those misconnections and that quest appear in hints and pieces. Like a comic stopping just short of a punch line, at times Martin sets up a personal (usually romantic or sexual) situation - and then moves on to something else, most notably when he indicates the importance of one woman in his life, then declares the "highly romantic, goopy" letters he wrote to her "too embarrassing to reproduce here."

He is more forthcoming with his comedy archives: post-performance notes (from when he was 15), plus promotional fliers, a monthly itinerary from his peak of popularity, and various personal and professional photographs. And he mitigates his personal distance with his awareness of it, as when he describes his relationship with the reputedly aloof Johnny Carson as "at least as personal as he or I could make it."

While "doing comedy alone onstage is the ego's last stand" - and writing a memoir could be seen as the ego's last literary stand - Martin is open about his struggles, modest about his successes, and generous in crediting people who helped him.

And amazingly, unexpectedly, Martin the person, the son, comes through at the end. When his years of work culminate in tremendous success, his father's heartless response makes mere distance seem a comfort. Yet just as a joke works in part because tension is resolved in a way that is both surprising and logical, Martin's concluding pages work like a killer joke, the emotional punch line paying off the long-ago setup. One stand-up comedy principle is to open and close with your best material. In terms of his personal life, Martin has done this.

"Born Standing Up" shows a creative artist growing from a curious, somewhat unhappy kid into various stages of performer, comic, and phenomenon. He offers what few entertainment figures can: intelligent analysis and writing, celebrity glimpses, and seemingly genuine modesty. "Born Standing Up" is smart, compelling, and truly revealing, as Martin the comic and writer opens up his archives, his mind, and even corners of his heart.

David Maloof is a writer in Belchertown who also performs stand-up comedy. He can be reached at David@ProWriting4.com and Dave@LaughAtDave.com.