THIS STORY HAS BEEN FORMATTED FOR EASY PRINTING
book review 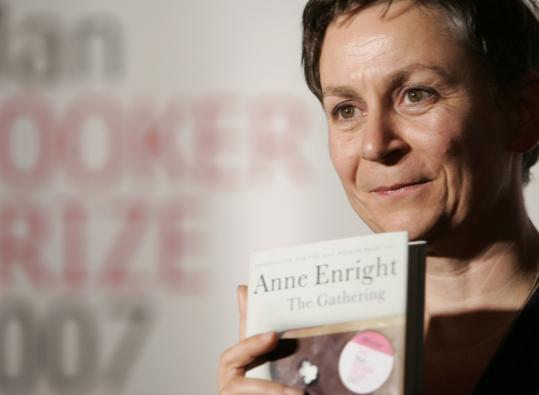 When reading books I'm going to review, I fold down the corners of pages containing passages that are especially illuminating or powerful. My copy of Irish author Anne Enright's "The Gathering," winner of the 2007 Man Booker Prize, is now twice its original thickness from all of those dog-eared leaves. In fact, about the only unfolded corner is the cover (and even that's pretty good).

"History is such a romantic place, with its . . . urchins and side-buttoned boots," observes Veronica Hegarty, the book's narrator. "If it would just stay still, I think, and settle down. If it would just stop sliding around in my head." The inside of Veronica's head - a mottled landscape of fact and imagination - is the venue for this powerful chronicle of loss, rage, longing, and what is loosely called "memory."

In her late 30s, Veronica is one of nine surviving children of the 12 born to a mother who is "such a vague person, it is possible that she can't even see herself." There had been 10, but as the book opens, the body of Veronica's older brother Liam - itinerant, alcoholic, and lost - has just washed up on a beach in Brighton, England, after Liam walked into the sea with stones in his pockets.

Nearest to Liam in age, Veronica was also closer to him than any of her other siblings. They shared friends, drugs, vodka, the occasional flat, and many childhood months together in the home of their maternal grandparents, Ada and Charlie. In the weeks following Liam's death, Veronica's memories of those months and the events that transpired in that clammy little house burst and ooze and layer her consciousness. She finds herself alienated from her husband but longing for another baby, contemptuous of her siblings but comfortably free in their presence, grieving for her mother's loss of a child yet unable to forgive her.

"No, when it comes down to it," she muses, "I do not forgive her the sex. The stupidity of much humping. Open and blind. Consequences, Mammy. Consequences."

Veronica's mental journey back, not just to her own childhood but also to her grandparents' imagined courtship, is her attempt to delineate causes from consequences and individual nature from family environment. And while the details, the facts, are shifty and evasive, the emotion fueling Veronica's dive off the deep end is unambiguous and high-test. Listen to this fierce and clear-eyed account of her childhood: "The thing is, there was great privacy in a big family. No one got into your stuff except to steal it or slag you off. No one ever pitied, or loved you a little, except maybe Ernest, whose pity was, even then, too deliberate to matter. And we thought this was an honourable way to live. I still do, in a way."

But this novel is not just the latest entry in the once-popular recovered-memory-of-abuse genre; in fact, the traumatic events are the least of the story. "The Gathering" is a witty, scatological, and moving splendor of a novel. Enright's language is percussive one moment, liquid the next, and always in the service of Veronica as we accompany her in her hobbled, painful steps toward self-reinvention.

Julie Wittes Schlack is a Cambridge-based writer and facilitator of online communities.