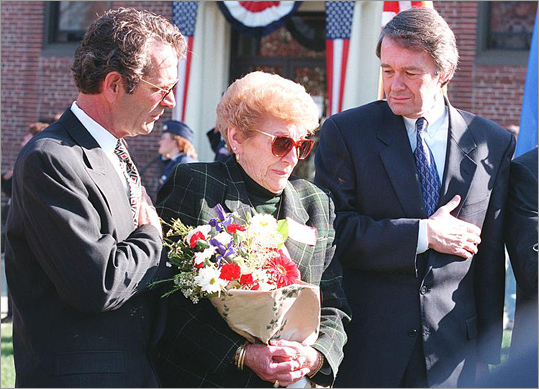 By Linda Morgan Bliss, Globe Staff
US Representative Edward J. Markey, Democrat of Malden and one of those people DelRossi enlisted into her cause, had persuaded Department of Defense officials, who supplied the casualty lists to the memorial committee, to recognize that US military advisers were in Vietnam as of Nov. 1, 1955. That qualified the elder Fitzgibbon for inclusion on the memorial, which lists him as the first casualty of the war. “I just wanted to have his name on that slate in Washington,’’ she said.

At the Vietnam Veterans' Memorial dedication in 1998, Eunice Fitzgibbon, is helped by her son Robert and Representative Ed Markey.