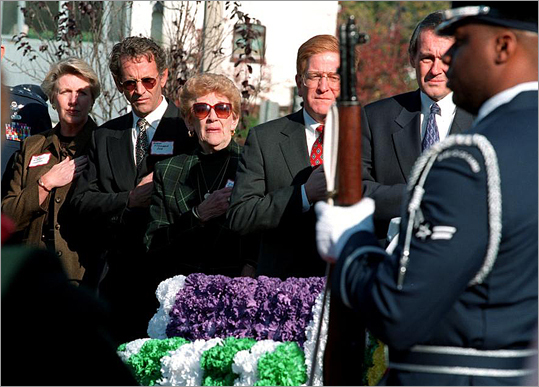 By Linda Morgan Bliss, Globe Staff
When the Vietnam Veterans Memorial was being built with private funds in the early 1980s and the names of those killed were being compiled, Jan. 1, 1961, was used as the starting date to qualify for placement. DelRossi, 85, knew that her brother’s name belonged there as well. “People didn’t know,’’ she said of his death. “It wasn’t published in any paper at the time.’’ She also wanted everyone to know that both her brother and his son had lost their lives in Vietnam. “People were shocked; they told me that can’t happen,” she said.

Eunice Fitzgibbon, center, at the Vietnam Veterans' Memorial dedication in 1998.