Savoring one part of the Amazon 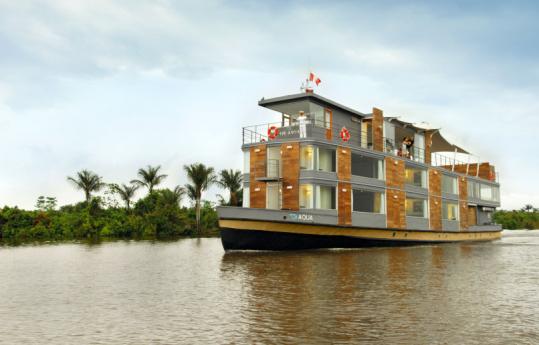 IQUITOS, Peru — I am sipping a pisco sour, a popular Peruvian cocktail made from a native grape brandy, and nibbling on plantain chips and shrimp with sauce made of cocona, a local fruit.

While I have come to see monkeys, blue Morpho butterflies, pink dolphins, and the lush, mysterious rain forest, it was the chance to taste Peruvian food in a luxurious setting that lured me here. I am on an intimate cruise (only 24 guests per trip, maximum) along the Peruvian part of the Amazon. The popular chef Pedro-Miguel Schiaffino is leading not only the kitchen of Aqua Expedition, but also his country’s rising culinary scene.

This is the beginning of high-water season in the Amazon rain forest. The rivers, streams, and lakes here will soon be about 23 feet higher than usual.

On a skiff with fellow passengers — we venture out twice a day — I see how residents prepare for the time when the Amazon will nearly reach their homes, which are built on stilts. The water will stay high for more than 90 days, so this is the time to gather fish for future meals. Once the water rises, the fish disperse. Along the banks, people camp out and we stop to say hello. Two brothers patiently string together their net, which has been torn by the sharp teeth of small-nosed piranhas. Their catch sits in a basin, preserved with salt. We fish, too, for piranhas — not to eat, but to see them up close.

Plantain and banana trees are abundant along the Amazon and a group of monkeys seem to be eyeing a pile of bananas a man has collected. Squirrel monkeys jump from tree to tree, but they won’t approach the bananas while humans are nearby. A pot of bananas boils over a makeshift fire so the fishermen can eat them soft and warm.

The boat passes fields where rice and watermelon are harvested, two staples of the Peruvian diet. Potatoes aren’t grown in this part of Peru but yucca is. The starchy root vegetable appears often as a side dish. One night, it is used in a dessert: fried yucca beignets filled with chocolate and aguaje (a fruit from the palm tree) ice cream. Another local delicacy, star fruit, is the main ingredient in a chutney served alongside a brochette of beef or chicken, and it is served again in a salad dressing and as juice at breakfast. Camu camu, which comes from a riverside tree, and cocona, an edible berry from a hardy plant, are used in drinks, sauces, and many dishes.

Another morning we search for wildlife from our skiff. The dolphins we see popping out from the dark water turn pink when they’re excited, “like blushing,’’ our naturalist guide tells us. The water here is almost black from vegetation and rainfall. And some parts of the river are full of what’s known as water lettuce, which the manatees love to eat. This vegetation makes the water look like a field, but the driver of our boat navigates through the greenery easily. We spot black-collared hawks, a white-headed toucan, yellow-headed cara cara, tropical kingbirds, macaws, a sole egret, orioles, and vultures.

In the early afternoon we enjoy an Amazonian lunch onboard: fresh hearts of palm salad, shaved into a tangle of fettuccine-like strips and dressed in yellow cocona vinaigrette. Cocona tastes like a cross between a lemon and tomato, fitting for a salad dressing. Large local river snails are filled with sweet pepper salsa. A piece of chicken is surrounded by rice and stuffed with a hard-boiled egg and an olive, then wrapped in leaves for a unique rendition of a tamale. For dessert there is a choice of two tarts: camu camu custard or the denser huito, the fruit of a medicinal plant, served with guava sauce.

We pass by villages named January 20th, for when it was founded, and Buenos Aires. Women wash clothes in the dark water while children bathe along the banks, stopping to wave hello. Along the way we pick up a boy named Pedro, who comes with his machete, because today we’ll venture into the Amazon by foot and the long knife might come in handy. The jungle seems to be a million shades of green as we walk along a path looking at the vast bounty. Ricardo, our guide, rubs termites on his hands and the smell is like turpentine. Pedro stabs the large base of an ancient tree and a white milky substance pours down the bark. “This is for lung problems,’’ Ricardo says. “If you have bronchitis, you can drink this to feel better.’’ But then Pedro notices the ants, letting one crawl onto the sword so we have a close-up view. To an outsider they look like any other ant, but these, if they bite your skin, will cause pain for over 24 hours and can even paralyze.

Dinner that night consists of short ribs stewed in South American red wine. Between the main course and dessert there is a palate-cleansing sorbet made with local fruit. Elegant profiteroles are filled with eggfruit ice cream. On another evening we have hearts of palm soup with avocado puree, cold and refreshing, followed by baked catfish with sauteed vegetables.

Our three naturalist guides, Juan, Ricardo, and Victor, grew up in small villages along the Amazon and possess what seems an innate knowledge of their backyard. One day Juan points out an amazing double rainbow. Eagle-eyed Victor spots a three-toed sloth in a tree and I see it through binoculars. “They laze around 80 percent of the day,’’ Juan tells us. We leave the sloth tree-bound, since it could be hours before he moves again and there’s so much else to see, such as the caiman, whose red eyes become noticeable at night.

As dusk begins to reveal its dark blue hues, a colony of bats zips by the skiff in a zigzag pattern. Soon our three skiffs are floating side by side. The guides hand out mimosas, and with the sun making its final descent, we snack on nuts called monkey brains and toast our adventures on the Amazon.

Tracey Ceurvels can be reached at tracey@thebusyhedonist.com.

Aqua Expeditions offers three-, four-, and seven-night cruises on the Amazon. Travel from Lima to Iquitos is required (about a 90-minute flight). There are two excursions daily on a skiff with a naturalist guide. Prices range from $2,400-$5,950 per person double occupancy and include all meals while onboard, all excursions, all beverages, transfers to/from vessel, Pacaya Samiria entrance fee.
www.aquaexpeditions.com
866-603-3687