On a houseboat in Utah’s grand canyons

From Lake Powell to Jurassic history 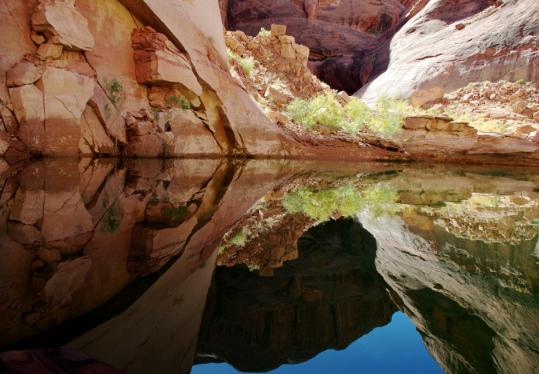 With two free plane tickets after being bumped from a flight, I thought about San Francisco, Santa Fe, or New Orleans. My husband suggested taking a houseboat on Utah’s Lake Powell to explore the side canyons of the Colorado River.

I knew about the serpentine slot canyons lacing the Colorado River system from Edward Abbey’s “Desert Solitaire: A Season in the Wilderness,’’ in which he laments the flooding of the lost jewel of the West, the gorgeous Glen Canyon, all to create a reservoir for the surrounding arid states. Since 1963, the Glen Canyon Dam in Arizona has backed up the river 186 miles into countless gorges, valleys, and tributaries to create Lake Powell, itself a thing of beauty.

My husband’s idea was to take the houseboat from the lake up the remote Escalante River and then kayak deeper into the canyons. Then we could hike farther up the winding gulches through steep, arching red sandstone cliffs into places only the most rugged individuals can reach from the high plateau above after backpacking across barren deserts and down sheer cliffs.

So I said yes, and we flew into Salt Lake City and drove south through Capitol Reef National Park to the Glen Canyon National Recreation Area. As we approached, we could see the vivid blue of Lake Powell offset by terra cotta islands — erstwhile peaks and mesas of Navajo sandstone — and looming cliffs of the same saturated color. An array of white dots marked the houseboats docked at Bullfrog Bay, one of the lake’s five marinas, 97 miles upstream from the dam. Because the marina is so remote, we arrived the afternoon before and spent the night at the Defiance House Lodge, the only lodging for over a hundred miles other than campgrounds. There are also no grocery stores, so we had bought food way back in Torrey, west of Capitol Reef, and kept the fresh vegetables and frozen meat in a cooler.

At the lodge, we learned that because of recent dry years, the lake was 70 feet below the high-water mark. That meant we might be able to see certain waterfalls, Indian cliff dwellings, and petroglyphs that we might otherwise float past.

To our dismay, we discovered that the 46-foot Expedition houseboat we had rented for four days and three nights had only a single engine and would take us nine hours to reach the Escalante. So we upgraded to a faster two-engine boat.

The boat was essentially a two-bedroom house trailer on pontoons, equipped with linens, dishes for 12, a CD player, gas grill on the front deck, deck chairs — and of course, a water slide from the upper deck. The kitchen had ample counter space, pots and pans, a microwave, coffeemaker, full-sized refrigerator and freezer, gas range and oven. The bathroom had a shower with hot water and a flush toilet. Both kitchen and bath had two faucets, one with potable water for drinking and cooking, the other with lake water for washing. We also rented two kayaks. (Some people tow speedboats.)

A marina employee showed us how to use the twin engines, propane generator, and navigation system. Then he guided the houseboat into open water and jumped into a waiting skiff. We headed out on our own.

The boat, so large at the dock, was soon dwarfed by the sheer cliffs, which rose hundreds of feet above the creamy band of the high-water mark. Yet the sonar told us that the water was hundreds of feet deep. We strained to imagine how the cliffs must have soared from the river bottom before the dam was built. After four hours of following the twisting lake channel for 29 miles, we entered the Escalante, a tributary of the Colorado. A few miles later we turned into scalloped walls of Clear Creek Canyon, which terminates in a slot canyon called Cathedral in the Desert. Then came the hardest part of the trip.

To park the houseboat, you are supposed to beach it on a sandy shore, drag two anchors out at 60-degree angles, and bury them in the sand. Because the shoreline changes with rainfall and drought, no one could tell us exactly where such beaches would be. In fact, we could not find any up Clear Creek Canyon, only a rockslide just before the channel got too narrow for the houseboat. We looked up at the cliff, knowing that recently a houseboat was squashed when an overhanging ledge crashed down. Out of options, we dragged the heavy anchors out and wrapped their ropes around some big rocks.

After enjoying a well-earned local beer called Polygamy Ale (whose motto is “Why have just one?’’) on the upper deck, we fired up the grill for our chicken marinara, fixed a salad and pasta, and ate dinner by candlelight. Then we settled in for our first night in the hushed canyons.

The next morning the cliffs still hid the sun as we climbed from the houseboat into our kayaks and rounded the bend leading through the vaulting cliffs of the Cathedral in the Desert. The sky was a wavering sliver above us as we floated among the salmon-colored alcoves streaked by centuries of chocolate and rust desert varnish. We had hoped to see a certain waterfall that is lighted by shafts of sunlight shining through the cliffs for just a brief midday hour. After decades under the waters of Lake Powell, it had reemerged in 2005 during a prolonged drought, but by now the water had risen again almost to the top the falls.

Later that day we took the boat another three miles up the Escalante to Davis Gulch. At one abrupt hairpin, we almost ran into the opposite canyon wall. The light shining on one cliff reflected off the opposite side, which glowed as if from the ancient sun that had once shined on the sand composing that rock. Geologists say these cliffs started as windblown sands some 150 million years ago in the Jurassic period. Deposits from a shallow sea cemented the sand into stone, laced with iron, manganese, and other minerals that have oxidized into the reds and oranges that now radiate from the cliffs.

Just when the sinuous passage became too narrow for comfort, we found a sandy beach where we anchored and then kayaked farther up the canyon. At a trickle running over a ledge, previously a waterfall, we tied up our kayaks and walked upstream.

Hanging gardens of tiny ferns marked the spring line where the water seeping slowly through the porous Navajo sandstone meets the impermeable underlying Kayenta standstone and seeks outlet, sometimes as a waterfall. We scrambled up to a high alcove looking for a pit house built by the Fremont Indians who lived here from around 500 to 1300 AD. We did not find one but saw petroglyphs of mountain goats and other creatures. Nearby, improbably delicate lavender trumpet flowers grew among the scrubby olive sage and yellow rabbit bush.

When we returned to the houseboat, we built a fire in a sandy alcove. Later, we lay on cushions on the upper deck and gazed at the dazzling Milky Way.

The next morning we motored Fiftymile Canyon during the photographer’s “golden hour’’ when sunlight imparts an inspiring glow to the world. We parked at another wide sandy beach and then paddled the kayaks through treetops, reeds, and floating logs.

When we came to a waterfall, we left the kayaks, climbed to the top and waded on through another slot in water reaching our thighs. Later, we reached a wash that led to a trail up to the canyon rim and then west to Hole in the Rock Road. Eventually we turned back for another evening by firelight under the stars before returning the boat to the marina the next afternoon.

We knew that if we ever returned to these canyons, we would find them changed. An alcove we explored yesterday may be flooded in tomorrow’s wetter season, or stranded high above in a future drought. But why repeat? There are thousands of alcoves and even, perhaps, still uncharted side canyons to explore.

Cathryn M. Delude can be reached at cathryn.delude@gmail.com.

How to get there
Bullfrog Marina is in the Glen Canyon National Recreation Area, 296 miles south of Salt Lake City and 91 miles southeast of Capitol Reef National Park. Vehicle entrance fee to the area is $15 for one week.
Bullfrog Marina
Open year round but other amenities, including the lodge and restaurant, close from late fall to early spring.
435-684-3000
www.lakepowell.com/rv-and-camping/hite-marina.aspx
Boat reservations
Prices vary with size, season, length of stay; from a one-bedroom 36-foot open-air boat to a 75-footer with four staterooms and two queen-size lower berths.
800-528-6154
(Aramark Reservations)
www.lakepowell.com/stay/houseboating/houseboats.aspx
888-454-8825
houseboating.org/powell/overview.cfm
Where to stay and eat
All reservations through Aramark or Houseboating.org
Defiance House Lodge, Family Units, Campground and RV Park.
Defiance House is the only hotel in the entire northern part of Lake Powell. Clean, comfortable rooms, many with lake view, $136-$173 for standard.
www.lakepowell.com/accommodations.aspx
Anasazi Restaurant (at Defiance House Lodge)
The only restaurant in the area, it serves decent food and has stunning views of Lake Powell. Closed late fall through early spring. Dinner $9-$34.
www.lakepowell.com/dining/bullfrog-dining.aspx
Onboard: Bring your own food, or order from Meals on Board.
www.lakepowellmeals.com/store/