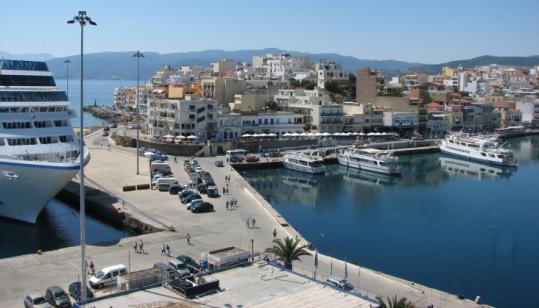 The port at Agios Nikolaos, Crete, from the ship’s deck. (Necee Regis for The Boston Globe)
By Necee Regis Globe Correspondent / January 31, 2010

ATHENS - After reading David Foster Wallace’s brilliant essay “A Supposedly Fun Thing I’ll Never Do Again,’’ I swore I would never go on a cruise.

Not only am I susceptible to seasickness, I am also a bit claustrophobic, and I feared people I didn’t want to know would pressure me to do the limbo. My reasoning also concluded: Cruises are for old people. (Not me.) Cruises are for people with little children. (Also not me.) Cruises are for unimaginative tourists who want traveling to be safe and familiar while being herded around like sheep. (Ditto.)

Then temptation came calling in the guise of my friend Marlene. “This cruise is different,’’ she said. “It’s a Greek-owned line, and it’s small.’’

Small is a relative term when it comes to cruises. The Louis Cruise Lines’ Louis Cristal accommodates up to 1,200 guests, which is larger than my college graduating class. However, most of the megaships I see departing from the Port of Miami host upwards of 2,600 passengers per voyage, not to mention the newest mega-megaship, Oasis of the Seas, with a capacity of 5,400 guests, or the entire population of Boxborough.

“It’s less about onboard activities and more about the culture and historic sights at each destination,’’ said Marlene of the seven-night cruise. “We board in Athens, and stop in Crete, Mykonos, Santorini, Rhodes, and Patmos.’’

Having never been to Greece, I warmed up to the itinerary. But would I have to do the limbo? Emphatically not, I was assured. Marlene then added the magic words: “We’ll also spend a day and a half in Istanbul, and stop in Kusadasi for a tour of Ephesus.’’

Here’s where I admit to being an Istanbul junkie. I’ll do almost anything for a chance to visit that minaret-strewn city that scrawls magnificently across two continents. And so, one week in May, I boarded my first cruise ship, and found my assumptions debunked one by one.

First, our cabin looked nothing like the visions of my imagination: a tiny room with narrow beds, sink, and forlorn porthole offering a glimpse of the endless and roiling sea. On the contrary, our cabin had a bed large enough to comfortably share, bathroom with separate shower and toilet, and a sitting area that mimicked a Holiday Inn lounge with almost floor-to-ceiling windows spanning the width of the room. And the Aegean Sea was calm, not turbulent, its horizon punctuated by dusky islands resembling soft woven scarves casually tossed across a table. I never felt seasick or queasy.

Then there were my fellow travelers who, thankfully, didn’t fit my stereotype of “cruise people.’’ Most were low-key Europeans, not boisterous Americans, and were eager to either get off the ship at each port and explore its historic sites, or loll on the deck in the sunshine sipping rum and coke or (my favorite) a nonalcoholic Greek beverage called a frappe (basically Nescafe with sugar and milk shaken to a frothy consistency and served over ice in a parfait glass - with a straw).

And so I came to understand that not all cruises are the same. Sure, they have certain things in common: 1. Captivity: You’re on a ship with X number of other visitors and you can’t get off until you reach port. 2. Group excursions: You’re herded off the boat and onto buses to visit various sites. 3. Buffet meals: The breakfast and lunch buffets on Louis Cristal were more rudimentary than extravagant but, hey, I wasn’t there for the food. 4. Entertainment: Ours fell into the hey-gang-let’s-put-on-a-show category, but that’s why I loved it so much. 5. Origami towels: Bath towels are often folded into fanciful animal shapes as decorative bed adornments.

When booking a cruise, as with any trip, one must weigh what is offered against personal style and interests. My preferences lean more toward simple and basic than over-the-top, and the destinations are key.

Here’s what the Louis Cristal doesn’t offer that might be found on a megaship: waterslides, mini-golf, rock climbing, running track, art auctions, resort-sized pools (as a dedicated lap-swimmer, I admit to being a wee bit disappointed by the bathtub-sized pool but, hey, I wasn’t there for the exercise), Botox treatments, basketball court, and Pilates center.

Still, my ship offered more than adequate amenities. There was a spa, with meticulously trained massage therapists, hairdressers, and aestheticians, a small fitness center (though after walking around cobblestone streets all day I was more interested in a bed than a treadmill), an outdoor Jacuzzi, duty-free shop, Internet, three lounges, one fancy restaurant, steam bath and sauna, small casino, and disco lounge.

Other activities had the feel of a multilingual summer camp for grown-ups, and I mean that in a positive way. On the Riviera poolside deck, about 30 people gathered for a cooking demonstration of the Greek specialty moussaka, and about 10 of us attended a Turkish class.

The captain, Leonidas Panopoulos, arrived straight from central casting. Compact, strong, with salt and pepper hair, square high forehead, and nose as straight as a marble statue, he’s the George Clooney of Greek ship captains. The other 400 or so crew hailed from dozens of countries. I can’t imagine anyone more cheerful and energetic than Elisabeth Rafferty de Castro, the British director of activities. Perhaps the most touching moment was when she gathered the crew - including dishwashers, cleaning staff, chefs, bartenders, excursion guides, and, yes, the captain and his underlings - for a farewell show in the theater. These nonprofessional singers gave a rousing rendition of “We Are the World,’’ leaving only the most cynical among us dry-eyed.

The cruise was also an easy introduction to a spectrum of Greek islands and Turkish ports, and will help determine where I might visit on a lengthier trip.

Would I do it again? You betcha. Just don’t ask me to do the limbo.

Necee Regis can be reached at neceeregis@gmail.com.