Slow going up the Loire, more to savor than to see 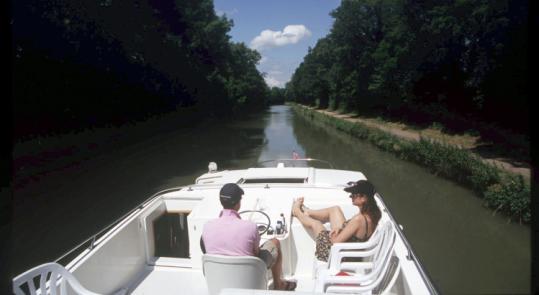 DECIZE, France - It would be hard to invent a more limited way to see Europe than on a rented canal barge. You have a choice of two directions, forward or back. Most towns on the map are completely out of reach. Your maximum speed doesn’t quite break 5 miles per hour, and every couple of miles you need to stop completely and wait to be let through a lock. There is some chance you will get your timing wrong and spend the night in an industrial port.

Yet people pay thousands of dollars a week to float through the countrysides of various nations by barge. My parents became obsessed with barge travel - so much so that they planned a rare family trip around it, hosting their adult children for a week afloat in the Loire Valley. And when they asked, I said yes.

Normally, this is the part of the story when the writer talks about being won over by the slow pace of life, the lush and rolling countryside, and the cagey but charming locals. And yes, maybe these things did happen. But the image that sticks with me from my week on the canals of France is something quite different: the moment when I turned, horrified, to see my father about to be cut in half by his very own barge.

It happened on the third day of the trip. We were trying to moor the barge by pulling it against the shore, and my father’s feet slipped off the edge. Suddenly his body was about to become a bumper between our massive boat and the rusty, unforgiving canal wall. My brother pulled him aboard in time, and my father was unshaken by his close call. But the incident suggested that there are some inevitable surprises when you travel on a vessel that you are also, the whole time, learning how to drive.

Barge travel is a lifestyle for Europeans, especially retirees, thousands of whom drift through country waterways for months at a time. These people have a certain expertise with barges: They can maneuver their long boats through tiny bridges, turn them around crisply, even venture out of canals into wilder rivers.

For the inexperienced, though, barge travel requires skills that most of us do not have. (There are luxury barge companies that guide you through France with a captain and crew, but that’s a whole other vacation.) When you are not accidentally scraping the side of a lock or another moored boat, the novelty is part of the fun.

My parents rented our barge from Le Boat, an enormous operation that rents barges all over Europe, from England to Italy. Our trip started a few hours south of Paris, where a canal runs roughly parallel to the snaky curves of the Loire River. We got our boat on a Saturday afternoon in a town called Decize.

The thing we rented was not what you probably think of when you hear the word “barge.’’ There are plenty of old industrial boats still plying the canals in France, mostly renovated by vacationers as their personal leisure craft. But Le Boats are more like modern cabin cruisers. Ours was long and white and graceful, with a bright galley and a CD player. It had four bedrooms, three showers, and a long sundeck on top. A ledge on the back held bicycles.

Before we cast off, we unpacked our clothes into the tiny closets, figured out where to put the empty suitcases (they became my sister’s roommate), and stocked the miniature fridge with bread, cheese, coffee, and wine. We opened and closed hatches, practiced flushing the pump toilets, checked to make sure the sun umbrella worked. We spread a detailed atlas of the canal on the dining table.

The most important part of the trip - our lesson in how to drive the 48-foot, several-ton boat - was approximately 20 minutes long, and conducted in brisk French by a beefy man in a polo shirt named Thierry. From this encounter we determined that steering happens very slowly; that if you need to turn around, you swing the wheel and alternately shift the engine into forward and reverse (really!). I didn’t think about it at the time, but we didn’t learn much about how to actually moor the boat. Not until the second night did we get advice on this, from a helpful port worker who had watched our vain attempts to thread the boat between two floating piers.

The trip worked like this: We left on a Sunday morning, and were expected to show up one week later at a Le Boat marina in the town of Chatillon-sur-Loire, 76 miles up the river. Everything else was up to us: what to visit and for how long, where to sleep at night, when to stop barging and ride our bikes for a while.

The rhythm of each day was set by the locks, which occurred every couple of miles and operated only from 9 a.m. to 7 p.m., with time off for lunch. These were charming, each with a keeper’s house, some with a garden. We would slide into a chute, wait for the rush of water to lower us a few feet to the next segment of canal, and tip the lock-keeper as giant steel gates freed us again. One time we bought a giant head of lettuce while we descended; often we were stared at by villagers. We ended up not so much plotting our voyage as timing it: If we stopped at Cours-les-Barres for the night, maybe we could clear the next few locks the next morning and reach Marseilles-les-Aubigny for lunch.

We didn’t have much company besides a few other pleasure boaters. The canal system of France has been charmingly obsolete for much of its history, and the canal towns, once bustling small ports for grain and coal, are now sleepy villages with tiny lawns for tying up barges.

The days scrolled by pleasantly. In Chevenon we secured the boat by hammering stakes into the grassy shore and wandered through an outdoor market. At Herry, I jumped off the boat while it descended the lock and found croissants and bread at the local bakery. We spent time in a couple of spectacular medieval towns I had never heard of, like Charite-sur-Loire, whose center is carved out of the ruined nave of a cathedral. In Nevers, an outdoor music festival started up as we finished dinner, and we ended up hypnotized by a jazz trio from Mali and Senegal playing before the imposing 16th-century Town Hall.

We saw France as a series of snapshots: long fishing poles along the bank, wheat fields swaying beneath nuclear cooling towers, tiny defunct canals winding into fields. In Sancerre, a hill town whose white wines are fashionable and expensive back in the United States, we stopped in at two family wineries and were greeted, both times, with an almost surprised enthusiasm by the winemakers, who opened bottle after bottle for us.

Over time we all got better at driving the boat. We ticked off our final towns, then deliberately overshot our destination of Chatillon so we could cruise across the spectacular bridge at Briare, where the canal itself is carried over the Loire on a massive aqueduct.

In our last port, we tied up next to a full-service luxury barge three times longer than ours and carrying a handful of Americans drearily pecking away on Wi-Fi. We felt almost sorry for them, prisoners of a huge vessel driven by someone else, never making a mistake, or an impulsive stop.

There are ways to see a lot more European landmarks in a week. Or, really, any landmarks. But I came to think of the trip, overall, as a great argument for the strategic elimination of choice. We couldn’t turn away from our one route, couldn’t drive all night to make the next town, or speed up to get somewhere by lunchtime. For hours at a time, there was nothing to do but watch herons grandly flap their wings along the canal, feel the slow march of trees on either side, and drink wine on the warm deck at sunset. The locals really were charming, and so were our other steady companions: the green water, the thick grassy banks, and the ghosts of grain shipments past.

Stephen Heuser can be reached at sheuser@globe.com.

Several companies rent self-piloted canal boats in continental Europe and Britain. We rented from Le Boat (www.leboat.com, 800-734-5491); others include Nicols (www.boat-renting-nicols.co.uk), Rive de France (www. rivedefrance.com), France Passion Plaisance (www.houseboat-hire.com), Locaboat Holidays (www.locaboat.com), and Cardinal Boating Holidays (www.car dinalboating.com).
Cost varies by location, time, and size of boat. A one-week Loire cruise on Le Boat can range from less than $2,000 for a one-bedroom in March or April to more than $6,000 for a four-bedroom in July or August. The price includes damage waiver; fuel is a small additional cost. For pricing and logistics, it’s best to call rather than book online.