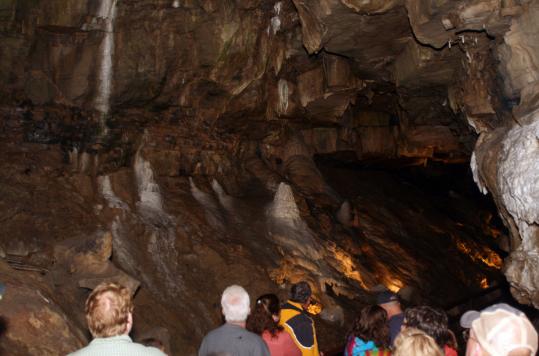 HOWES CAVE, N.Y. - The call of 19th-century hucksters beckoning to tourists still echoes in these hills where Howe Caverns and Secret Caverns yawn below green pastures. But despite the trail of billboards and some hokey trappings, the caverns are natural wonders. Although not physically connected, they lie within a mile of each other in this pastoral region 44 miles west of Albany. Both have extraordinary water features. And both were discovered by cows.

This is no coincidence. In the humid summers of central New York, dairy cows, long the economic mainstay of the region, naturally roam their pastures seeking relief from the heat. Caves, insulated by layers of soil and rock, maintain a constant, year-round temperature - in this case, between 52 and 60 degrees. Sooner or later, farmers were bound to notice cows huddled around outcrops of ledge on hot days, because the ledges were exhaling chilly air.

In the case of Lester Howe, who owned the farm adjacent to the land containing Howe’s Caverns, that day came in 1842, when he found a cow named Millicent basking in a cave breeze on his neighbor’s farm. After discovering the caverns below, Howe eventually bought the property.

On the farm containing what is now Secret Caverns, it was 1928, when a cow (Lucky) and a bull (Floyd), drawn to a cool draft flowing from an opening in the ground, crashed through the earth into a cavern 85 feet below. The farmer, afraid that the rest of his herd would meet the same fate, readily sold out to an enterprising civil engineer.

Today’s visitors face no such hazards. The entrance to Howe Caverns, 156 feet, or about 16 stories, below ground, is reached by elevator, just like descending to the lower level of a parking garage. Visitors need not fear squeezing through wormholes, either. The elevator opens to a vestibule at the base of the elevator shaft, blasted out of the earth in 1928. This high-ceilinged room is one of only a few passages in these caverns that have been enlarged for commercial tours. A brick-paved path follows the gurgling course of an underground stream for a half-mile through water-worn canyons. At the beginning of the tour, guides refer to it as the River Styx, after the one in Greek mythology that separates the world of the living from Hades, the underworld realm of the dead.

Rivers like this one carved these caverns from limestone, which is softer than the granite underpinning much of New England. The subtle electric lighting along the walls illuminates rippling layers of tawny limestone formed up to 435 million years ago, the folded floors of ancient seas. Geologists have found fossil beds above the cave ceiling, concluding that the caves toured by visitors predate most fossils. Like above-ground river canyons in the American West, the caverns take their fluid forms from vanished currents. Walls bulge out, then recede. Ceilings dip down, then soar into cathedral-like domes.

These passages and rooms have been named for their striking qualities: the Bronze Room, Lester’s Ledge, the Great Rotunda, the Pool of Peace. Then there are the features formed by the slow accumulation of calcite, or dissolved limestone: stalactites dripping from the ceilings, stalagmites rising from the floors, and flowstone clinging to the walls. Over hundreds of thousands of years - calcite solidifies at the rate of about one cubic inch per century - formations assume bizarre shapes, suggesting more whimsical names: the Chinese Pagoda, the Cathedral Pipe Organ. The moist-looking flowstone is off-limits to touch: skin oils and acids alter the chemistry of the surface, marring its color and making it too slick for new drops of calcite to stick, forever stunting the formations.

By the time visitors board flat-bottomed boats to cross a still passage of the river, the caverns are dark and deep - and cold. Although the body of water has changed names at this point, from the River Styx to the Lake of Venus, the atmosphere feels less like a lover’s lane than the eerie underworld. Few passengers utter even a murmur in the murk, leaving the drip of the tour guides’ paddles to punctuate the silence. The guides reverse direction by poling from the opposite ends of the boats, passengers turning to face forward. Disembarking, they retrace the route until making a detour into the Bridal Altar, a shelf-like flowstone formation where many couples have swapped vows. (Hokey alert: a heart, cut from pale, translucent calcite, is set into the floor in front of the “altar,’’ lighted from below.) The final detour is the most enchanting passage of the 90-minute tour. Called the Winding Way, this narrow canyon zigs and zags between walls four or five feet apart. Soaring ceilings keep the claustrophobia factor in check.

Secret Caverns, a short hop down the road, has more of a mom-and-pop flavor than its rival attraction, and is still owned by the family of the engineer who bought the land in the 1920s. As a series of antic cartoon billboards suggests, the site presents itself with a humorous twist. Visitors enter the caverns through a rustic shed, descending 103 narrow steps past the forms of ancient sea creatures imprinted in the limestone. Aside from the concrete path and the widening of the Lemon Squeeze, a passage formerly so tight that people had to crawl through it, the Secret Caverns remain in their original state. It is clear from some discolored walls, however, that visitors have not resisted touching the slick calcite. Water sluices along both sides of the path, and the walls weep steadily.

As in Howe Caverns, the tour is about a half-mile of even walking. Midway through both, the tour guide announces a demonstration of how dark the caves are without the electric lights along the path. A switch clicks off, and the blackness is total and immediate. When the lights come back on, visitors draw an audible breath. In both caverns, the only life form is moss, which has occasionally sprouted from spores brought in on visitors’ shoes and flourished in the moist, artificially lighted habitat. Here, too, intriguing spaces and formations have been given fanciful names: the Celestial Dome, Claustrophobics’ Corner, Frozen Niagara, the Alligator.

But the caves themselves are recognizably different, with more visible striations in the limestone in the Secret Caverns, and very different natural water features. A rushing sound begins to build midway through the Secret Caverns tour, and suddenly the passage widens to reveal a waterfall tumbling 100 feet from a hole in the cave ceiling. Faint rays of light filter in, illuminating the cavern, and the flume glows like a magical spring from “The Lord of the Rings.’’ This is the Lost River, and after splashing to the floor of the cave, it runs down a corridor beyond the path, flowing into absolute darkness.