The place to learn how to take a punch 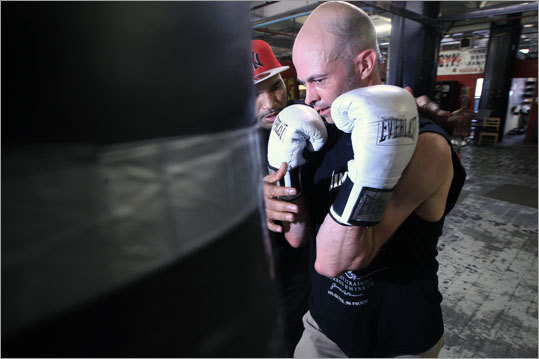 “Boxing? You’re going boxing?’’ says a neighbor to me on my way to my first class. “That’s cool! But it’s violent.’’

Arriving at Gleason’s Gym in Brooklyn’s Dumbo neighborhood, I sign a waiver that mentions “injury or even death’’ and in the following days, I’ll sport an impressive bloody nose, overhear a walleyed coach mention an upcoming brain scan, and have my trainer explain the disquieting interior mechanics of a knockout.

As someone with a body type my father refers to as “a blood vessel with shoes,’’ I had moments of self-doubt on my quest to learn about New York boxing from the inside, something that’s surprisingly accessible for anything from an afternoon lesson to a lifetime of study.

Gleason’s is an everyman’s gym with aged equipment made from wood and iron, and no-frills weights and treadmills. It’s not the shiny fitness center that makes you feel good about getting into shape, but the purposeful place to do it. Hundreds of framed photos of boxing legends crowd the walls around the office and a large, painted quote from Virgil dominates one wall: “Now, whoever has courage and a strong and collected spirit in his breast, let him come forth, lace up his gloves and put up his hands.’’ There are a lot of very fit people here - men and women - densely muscled, nonbuoyant types.

Owner Bruce Silverglade is relaxed and direct. “You can’t just walk in here and expect to fight. That’s going to get you hurt,’’ he says. “In boxing, you’ve got a guy 24 to 30 inches away from you who’s trying to give you a concussion.’’

Silverglade suggests that I work with a trainer for a few weeks and, if I’m deemed ready, be paired against a sparring partner.

“Sparring is about stamina. It’s exhausting. You’ll get nervous. But training is contagious,’’ he says, alluding to the pleasures of making progress. “If you want to go pro, you have to watch what you eat, what you drink, and how often you have sex.’’

I silently applaud myself for choosing to remain below the pro level as we discuss further training.

Function in form On day one, “Dangerous’’ Raul Frank teaches me to jump rope. Frank, one of the 80-odd trainers who works at the gym, waits 15 seconds before asking me to switch from two feet to one, emphasizing an economy of movement I will understand is one of the sport’s hallmarks. Twenty minutes in, I realize I haven’t sweated this much in years and give thanks that I’m a consistent runner.

My next trainer, Guy Verderosa, laments the “sissification of America’’ and shouts like a drill sergeant: Hold your form, stay loose, keep your feet apart, stay on your toes, keep your head down, your arms up, and elbows in. It becomes a thorough rethinking of the way I hold my body. The idea of inherent violence cedes to the discovery of an art.

Amid my form-dropping, I occasionally simply stop thinking and punch. Wap! Wap! Wap! I wonder if I should be enjoying it this much this soon.

After a few weeks, Gleason’s hosts a masters championship, and fighters, including a Mississippi neurologist, have flown in from around the world to participate. In the ring, the emcee, in a broad, white blazer, bow tie, and shiny shoes announces each bout as though he were the late Howard Cosell on “Wide World of Sports.’’ In a heavyweight fight, two giants move around like great slabs of meat. Later, two lightweight women work away at each other like angry bees with sharp, precise movements. I feel as if I am 1,000 miles from the external trappings of the city and at the center of its fighting heart.

The fighters hug after each match, an acknowledgment of what they have been through together.

“There’s a real feeling that people give themselves to you,’’ says contestant Bill Ruscher, 55, a Flemington, N.J., facilities manager. “It completely clears my head. I had a rough childhood and the aggression comes right out. It frees me.’’

Oliver Platt, a lawyer who has flown in from Frankfurt, Germany, agrees.

“I work in a controlled environment, but in the ring, it’s honest. It’s man versus man,’’ he says. “You beat yourself up for a couple of rounds, but afterward, you’ve made a friend. It’s a violent sport, but the people aren’t violent at heart.’’

I continue my training, building mental resistance, becoming less annoyed with my trainer’s criticism. I also start wondering what being on the other end of a punch - lots of them - is going to be like.

Progress is slow, but working away at a punching bag one day, I recall something Verderosa said: “Just flick your punch,’’ he said, mimicking Bruce Lee snapping shots at foes, his arms like whips. “The power comes from the ‘snap.’ ’’

Alone, I push punches stripped of their power into the bag, before channeling my inner Bruce Lee and firing a punch with a “Yah!’’

I step back in disbelief.

Two days before my sparring match, I have yet to hit anything more than my trainer’s gloves and punching bags. Nobody has taken a swing at me. It feels like a hole in my training, but there’s nothing I can do.

Into the ring Inexplicably, I’m not nervous and at the ring, Verderosa wraps my hands, adding an extra layer of white tape and easing me into large, yellow gloves. I step into something resembling a giant codpiece that protects my waist and nether regions and squeeze into a great, padded helmet.

“You’re supposed to wear a mouthpiece,’’ says Verderosa who, like a priest, sprinkling holy water on his flock, takes two steps back and flicks water on my chest from his water bottle while making the sign of cross and pushing me out the door.

Georgie is a Pillsbury Doughboy of a fighter. A 6-feet-4-inch New Jersey rug merchant by day, Georgie spars on the weekends while his wife and young daughter watch. There’s no way I can hurt him, but I figure I can run away if I get into trouble. I go to the red corner, the bell rings, we tap gloves and have at it.

Everything happens at once. I take a first swing, jabbing at his gloves. I don’t expect to tag him, but instinctively, I want to see how he reacts. He gets several big-boy punches in, but his gloves and my adrenaline displace the sting. I can feel my training give me the confidence I need to be out there - while most of the rest of what I learned in class goes out the window.

Using his gloves, Georgie helps me realize my pointy nose sticks out of the front of my helmet. I’m not much for getting out of the way. I never find much to do with my left cross, but I get a few good shots into his gut and at the end of the second round, just as Silverglade predicted, my arms become great, wet logs. I’m waiting for the bell. I’m completely exhausted.

Georgie puts his arm around my shoulder and says, “Thanks. That was fun.’’

If there were judges, Georgie would have won by unanimous decision, but I’m glad I’ve pushed myself.

“It was his first time,’’ says Verderosa.

Gleason’s Gym
77 Front St., Brooklyn, N.Y.
718-797-2872
www.gleasonsgym.net
The no-frills gym touts itself as the “oldest active boxing gym in the United States’’ and is home to scores of pros. The gym has daily, weekly, and monthly workout fees ($20, $50, and $85) and lessons with one of about 80 trainers can be arranged. A one-hour lesson with trainer Guy Verderosa is $60, but multiple lesson packages bring it down to about $30 per session. Visitors can also come in to watch.
Church Street Boxing Gym
25 Park Place, N.Y.
212-571-1333
nyboxinggym.com
This modern gym is a stone’s throw from City Hall in Manhattan. Day passes are available for $22, including shared access to a trainer. One-hour private lessons are $80, but packages are available. Spectators are welcome.