Seeking one long-beloved in the bookstores of the Village 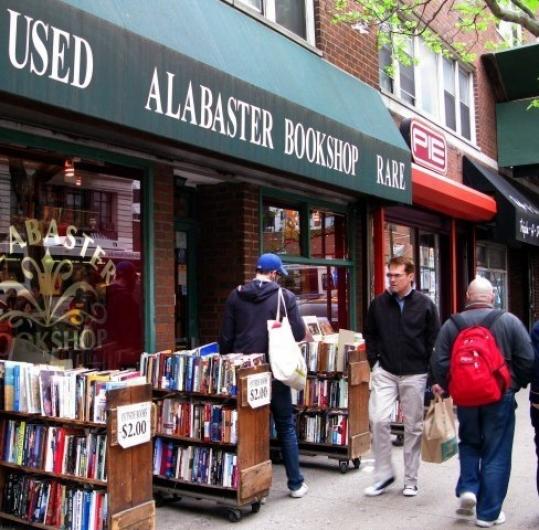 A name with busts inside to back it up. (David Lyon for The Boston Globe)
By David Lyon Globe Correspondent / September 12, 2010

With all deference to the online bookselling behemoths, I would rather hunt for books in shops that smell like fine old paper and leather bindings, places where “useless and pointless knowledge’’ (as Bob Dylan called it) seems to hang in the air and the clerks thumb old paperbacks between sales. In short, I’m a fan of independent bookstores, especially those that sell used books.

So when a Boston Globe column last spring mentioned a Greenwich Village Bookstore Tour bus trip from Fall River, I signed up — despite living in Cambridge, a city many consider the center of the independent bookstore universe. Folk music impresarios Alan and Helene Korolenko of Westport have these Manhattan pilgrimages down pat. They supply a walking tour of literary sites, a bookstore map with short descriptions, snacks on the trip down, and tips on where to eat.

Generously armed with the Korolenkos’ suggestions, next time I’ll take Peter Pan from Boston to avoid the 6:30 a.m. departure from Fall River. But I’ll miss the summer-camp camaraderie of riding with 40 other bibliophiles and babbling about favorite authors, favorite stores, favorite sights, and books we hoped to find. My white whale was a first trade edition of “New Hampshire: A Poem with Notes and Grace Notes’’ by Robert Frost. Published in 1923 by Henry Holt and illustrated with woodcuts by J.J. Lankes, it won the poet his first Pulitzer Prize. I once skipped buying it in a Newburyport book shop and have spent years regretting my misplaced frugality.

Having both a goal to limit my purchases and a backpack to tote my inevitable indulgences eased my assault on the Village bookstore scene, though clerks invariably asked me to leave the backpack at the front desk. (Who would pilfer books? Ask the ghost of sometimes-Village denizen Abbie Hoffman.)

Despite being the nominal setting for the TV show “Friends,’’ Greenwich Village retains its venerable literary and bohemian patina. Once I got off the bus at Washington Square, I walked west on West 10th Street past plaques reminding passersby that Mark Twain lived at No. 14, Dashiell Hammett at No. 28, and legendary party-host Sinclair Lewis at No. 37. Little cul-de-sacs across 6th Avenue held former homes of playwright Eugene O’Neill (Milligan Place), and journalist-agitator John Reed and poet E.E. Cummings (Patchin Place). I could have spent the day touching bases with literary heroes, but there were books to be bought. Keeping the Frost volume in mind, I decided to save for last the likeliest places to find it.

So I started with guilty pleasures, careening up Greenwich Avenue to Partners & Crime, which must serve my crime and detective fiction needs now that Kate’s Mystery Books has closed in Cambridge. Partners has what every devoted reader wants: a great selection of hard-to-find books (like British imports) and the backlist titles of deserving authors. Four books (of 11) by the greatest hard-boiled writer of my generation, the late Jim Crumley, had their own little display.

A few short blocks away, Bonnie Slotnick: Cookbooks enticed me in. I fully appreciate our local Jessica’s Biscuit (inside New England Mobile Book Fair in Newton), but Slotnick’s selections are narrower and quirkier. In a shop not much bigger than a Manhattan galley kitchen, she has cocktail guides from the Fifties, possibly every book James Beard ever wrote, and vintage cookware hanging on the walls. (Slotnick helped furnish the kitchen sets of the movie “Julie and Julia.’’)

If Slotnick’s shop is the Village’s kitchen, then the literary living room is almost across the street at Three Lives & Company, a seller of new books. This is where the literati and would-be literati sprawl on couches to peruse new titles or pick the brains of the amazingly well-read staff. Named as a “pocket of civility’’ by the Greenwich Village Historical Society, Three Lives is said to be the favorite bookstore of a number of literary agents — which might explain why some patrons tote dog-eared manuscripts.

To get serious about the Frost volume, I hoofed it over to 8th Avenue and West 12th Street, where I had heard that Left Bank Books had relocated. (It used to be on the left side of Bank Street, hence the name.) Known for its good poetry selection and superb first editions, Left Bank was filled with temptations, but no Frost. (There was a yellowed obituary of Brendan Behan on the wall, though.)

My route back toward Washington Square took me down Carmine Street for a taste of Greenwich Village of the Sixties at Unoppressive Non-Imperialist Bargain Books. Apart from a fabulous section of New York guides, histories, and photo books, most of owner Jim Drougas’s selections either draw from liberation ideologies or boomer-generation pop culture. He carries roughly three dozen books by or about Bob Dylan (and has a life-size Cardboard Bob in the window). In a moment of weakness, I bought Suze Rotolo’s “A Freewheelin’ Time: A Memoir of Greenwich Village in the Sixties.’’ Rotolo, who was Dylan’s one-time girlfriend, appears on the album cover of “Freewheelin’ Bob Dylan.’’ The saying goes that if you can remember the ’60s, you weren’t there. Rotolo was there.

A similar countercultural spirit prevails over in the East Village-Lower East Side at St. Mark’s Bookshop, a dealer in new books with big sections on anarchism, contemporary rock music, and zillions of small press publications. Among them are the hard-to-find but ever erudite “New York Review of Science Fiction.’’ A flier on the community bulletin board urged that someone adopt “Pinky,’’ a bodega cellar cat.

This foray wasn’t getting me closer to “New Hampshire,’’ though I could have sworn I heard the book calling my name when I stepped into Alabaster Bookshop. Although Steve Crowley opened the East Village store only in 1996, it has the air of permanence that can be achieved only by floor-to-ceiling wooden shelves loaded with carefully filed used and rare books. (It even smells like bookbinder’s paste.) Crowley’s architecture and poetry sections are especially choice . . . but no “New Hampshire.’’

Over the course of the day I wandered into and out of another dozen shops, and almost hit paydirt at Housing Works Bookstore Cafe (which has public bathrooms). Proceeds from the spacious shop help provide housing and health care for homeless people living with HIV and AIDS. Selections are extremely eclectic and shelves are chaotic, but where else can decorators buy books in antique leather bindings by the foot?

Actually, the storied Strand Bookstore was my ace in the hole for my Frost quest. With some 18 miles of (mostly used) books, Strand dwarfs the other Village bookstores. It would be possible to spend an entire day just browsing, so I was glad to have a goal. I hopped the creakingly slow elevator to the third floor and walked into the sanctum sanctorum of the Rare Books department. It is a particularly dangerous place for a bibliophile with a credit card: an entire floor of volumes that range literally from the sacred (medieval liturgical manuscripts) to the profane (signed Hunter S. Thompson first editions).

Alas, while they had collector’s editions of Wallace Nutting’s “New Hampshire Beautiful’’ and John Irving’s “Hotel New Hampshire,’’ they did not have a copy of Frost’s “New Hampshire.’’ I settled for a 1904 travel book on Scotland (complete with tipped-in reproductions of watercolors) before I joined my fellow book buyers on the bus ride out of Gotham.

David Lyon can be reached at harris.lyon@verizon.net.