Where so many things can seem so big, impersonal, and expensive, the city offers intimate, delectable tidbits for the visitor and the native 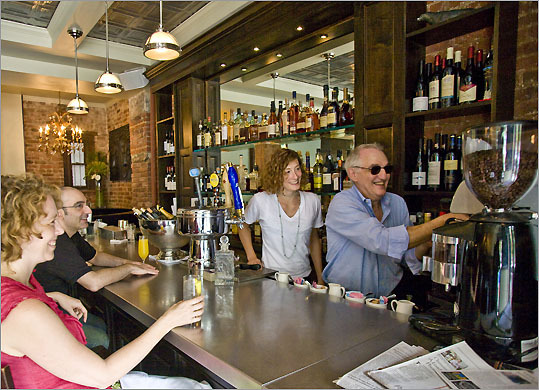 NEW YORK -- Day one in New York has all the rain we need for the Sunday blues. Two of us stand under the awning of a new SoHo restaurant, waiting for friends to show up for brunch.

“Could I get something for you guys?’’ says the man inside who has just delivered tasty-looking omelets to a table of customers.

A minute later, the man brings out two flutes of champagne. Just like that. Never to be seen on the bill.

The first real feeling that I was in New York had come the night before, at the big window of a 10th-floor Brooklyn Heights apartment. I kept the lights off, and there, across the river, were the skyscrapers of the southern tip of Manhattan. Straight ahead was Ellis Island, and next to that, the tiny off-angle lights of the Statue of Liberty’s crown and flame. It was a rush of emotion.

Still, after months in big cities, I’m yearning for something small, personable, and budget-friendly. I want a quiet grandeur to bring New York to a human scale, and Le Pescadeux is a perfect start.

“I base the way I run my restaurant on my mother,’’ says the man with the champagne, Charles “Chuck’’ Perelmutter, the restaurant’s owner. “Dad was a bit of a dry bone, but Mom was a gregarious person. If you take care of the customer, the customer takes care of you.’’

Perelmutter, 58, explains that his mother, Anne, was the first person to open a fancy food store in his native Montreal, and in terms of gastronomy and an ability to make you feel at home, the apple didn’t fall far from the tree.

This isn’t Perelmutter’s first act; for years, he ran the similarly-named Le Pescadou restaurant. “This way, people know I haven’t died,’’ he jokes. Decades ago, however, he came to the city to act. He’s known best for what he calls “being the first spoken role in a music video,’’ telling Bon Jovi they had “24 hours, boys’’ to get to Japan and back in the band’s “In and Out of Love’’ video.

In Le Pescadeux, he is a born host.

“When I was growing up, all the neighborhood kids would come to our place; Mom was the best cook in town,’’ he says, and it seems that he was taking notes.

Not only do you want to settle into a banquette at his restaurant and admire the Maggie Mailer paintings on the wall, you want Perelmutter to come over and tell you stories during your meal. You get the feeling that he’s whispered a sweet nothing or two in the ear of many a damsel, but with just a little coaxing, he’s got some good tales to tell. He may be a schmoozer, but he seems a sincere one. Along with a great brunch for just $14, part of the reason you want to go - or go back - is because he’s there.

Across the river, I walk into Fort Defiance, a new bar that’s a subway, bus, and world away from Manhattan in Brooklyn’s Red Hook neighborhood .

WHAM, WHAM, WHAM!!! Behind the bar, St. John Frizell, the owner, clubs a cloth bag of ice with a large wooden mallet to make a drink called the prescription julep, an 1857 recipe that blends cognac and rye whiskey, which are poured into a metal shaker cup and topped with a sprig of mint and a cherry. If it sounds a bit froufrou - like there should be a little umbrella shading the ice - instead, it looks perfect, almost serious, like something to pay attention to while you drink it.

“The key to bartending is making sure everybody’s having a good time,’’ says Frizell. “You can’t talk to everybody all the time, but you want everyone to be enjoying themselves.’’

That’s a tall bill for a bar and its rookie owner. Looking around, the bar isn’t filled with clients looking to get muddled, but people - single guys, couples at the bar, and families at tables - having a drink, tasting chef Sam Filloramo’s creations - think world’s best bar snacks, like a pair of deviled eggs or a muffuletta sandwich - while enjoying each others’ company.

It’s a far cry from Frizell’s previous job in sales and advertising for a publishing company, which he refers to as a “piranha tank.’’ He looks so at home at the bar, it’s hard to imagine him fighting the other fish.

Frizell drew inspiration for Fort Defiance from the obscure drinks legend Charles H. Baker Jr., whose 1939 “The Gentleman’s Companion’’ is broken into two volumes: “Exotic Cookery’’ and “Exotic Drink,’’ the latter with the subtitle: “Around the World With Jigger, Beaker & Flask.’’

“He’s got this breathless, faux-Victorian style, a sort of armchair traveler prose that’s long on color and short on details,’’ says Frizell, who is piecing together a Baker biography. “Yet he hung out with Hemingway, Robert Frost, and Waring . . . the blender guy.’’

I flip to the front of the second volume and there’s Baker in a photo, decked out like the captain of the Love Boat lounging with a big tropical drink, flanked by two women in hula skirts.

“That’s his wife and daughter,’’ says Frizell, chuckling. “Only about one in four recipes in there works . . . but they’re always fun.’’

Frizell leaves Baker’s frivolity at the door and instead draws on his curiosity for historic drinks like the julep and reverence for what Frizell calls “the proper drink, done properly.’’

It’s turned him into a drinks purist - not the kind who has spent 15 years brewing growlers of beer in his basement, but one who triple-filters the bar’s water, uses a specialized Kold-Draft ice machine, installs a custom seltzer system, and stands over the espresso machine watching each pour so he can pull the cup at just the right moment.

Before I meet a different kind of aficionado later that night, I see him play bluegrass at Red Hook’s Jalopy, a micro bar-cafe-concert hall and music school with a Mini Cooper (license plate: GOTBANJO) parked out front. Onstage, guitarist Rick Snell and his band, the Five Deadly Venoms, are framed vaudeville-style by strings of red and white lights and he holds his guitar high against his chest in a way that seems to allow him to coax emotion from it.

“It’s held up as a pure source,’’ he says. “The people who come are looking for that.’’

Snell, 32, points out the 1960s Greenwich Village folk revival where people went to cafes to see the likes of Bob Dylan play and would even head south to see the music at the source.

“It boiled over in New York; it was rural music reaching the rest of the world,’’ says Snell. “Now, there’s a DIY ethic to bluegrass, almost like a punk rock ethic, that Gen Xers and an even younger generation can identify with.’’

Snell has a deadpan style and a reserve that makes you wonder what he’s doing in New York, but as he talks, some of what sounds faraway turns out to be coming from within. “I love this city. To the core. I wouldn’t want to leave,’’ he says. “Maybe I’ll strike it rich and have a house here and somewhere else, but I’ll always have a house here.’’

After the show, I head out to the promenade near the Brooklyn apartment and see the Statue of Liberty across the water. She is far away, unmistakable dots: the crown and, out at an angle, the flame. Even at this distance, her iconic status kicks in and she’s out there alone at night, holding our hearts, hope, and history.

“Her position is the first and last icon of freedom,’’ says Barry Moreno, Statue of Liberty and Ellis Island historian. Yet from the Sept. 11 attacks until this past July 4, the small lookout inside the statue’s crown was closed.

“It was considered an impossibility to close the monument,’’ Moreno says, although there were a few exceptions like the 1916 “Black Tom’’ wharf explosion and the 1984-86 centennial restoration. “The story was, from the week it was unveiled in 1886, it was never closed.’’

Looking up at the statue, with the city off to her side, it feels good to know that the crown is open again and there’s a months-long waiting list to go up top.

On my last evening in town, with a thousand things to see and do, I opt for the views from the apartment, watching the sun go down behind the city.

Together, the places I’ve seen define only bits of New York, but they are big parts of the reason I’ll come back.

Joe Ray can be reached at joearay@mailcity.com.

Leave on a Saturday morning, come back Sunday night. Making a weekend out of New York is surprisingly affordable.

How to get there
BoltBusM
877-265-8287
www.boltbus.com
If there’s a better, more convenient option than the $10 advance-purchase one-way on Bolt Bus (which includes leather seats, free Wi-Fi, and a wall outlet), it would be free teleportation.

Where to stay
The Mave
62 Madison Ave.
646-237-2004
www.themavehotel.com
NYC hotels tend to eat up your budget in a heartbeat, so you might as well stay someplace cool. Rates at this brand-new boutique hotel start at $299 on weekends ($249 weekdays) and specials are on the website.

Where to eat
Le Pescadeux
90 Thompson St.
212-966-0021
Brunch is a steal at $14. Go classy and classic with a smoked trout and Dijon cr?me omelet or go crazy with a JYD, or Junk Yard Dog: eggs sunny side up, Pennsylvania scrapple, broccoli rabe, and country bread. Dinner is pricier; count on $60 per person.

Where to drink
Fort Defiance
365 Van Brunt St., Brooklyn
347-453-6672
www.fortdefiancebrooklyn.com
There’s the hint of a nautical theme owing to this bar’s namesake, a Red Hook fort that protected the city in the Battle of Brooklyn. From the kitchen, chef Sam Filloramo serves incredible muffuletta sandwiches along with tasty olives and deviled eggs so good, I want to go back to see what Filloramo will be making when his stove and oven arrive. The main reason for coming? “The proper drink, done properly,’’ as owner St. John Frizell puts it, for $8 or $10 a blissful pop.