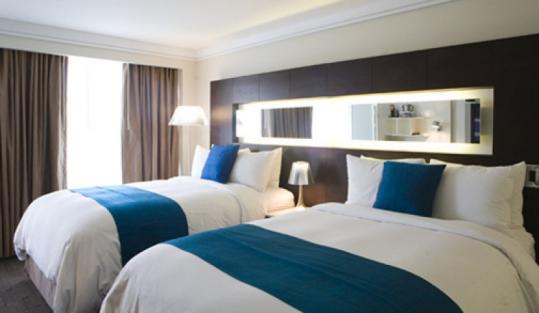 BROOKLYN, N.Y. - For a borough of 2.5 million people, Brooklyn has surprisingly few places to stay.

So it was news when the area got its first boutique hotel, the Hotel Le Bleu, which opened last year in the Park Slope neighborhood. From the eight-story glass-and-steel building, it’s a short walk past historic brownstones to trendy stores, vintage clothing shops, bars, and restaurants along Fifth and Seventh avenues. Public transportation is nearby.

Situated between a busy taxi garage and a U-Haul parking lot, the hotel definitely exudes an urban character - and in a good way. From its small white lobby enclosed in blue glass to the vibrant blue, white, and brown colors of guest rooms with floor-to-ceiling windows and custom-lighted headboards, the place is comfortable and fun, hip but not over-the-top.

The rooms (there are 48) are reminiscent of photo spreads in glossy design magazines. A spacious glass-enclosed shower, with rainwater shower head, is visible from bed. Luxurious bedding, a Bose Wave DVD system, iPod docking station, Wi-Fi, high speed Internet, and unusually good books about Brooklyn and New York are among amenities that partially make up for a restaurant that has yet to open.

Instead, complimentary breakfast was promptly delivered. Ours consisted of coffee, bottled juice, and cups of instant oatmeal and hot water we had to mix together ourselves. It was surprisingly tasty. The 42-inch flat-screen TV was so impressive, the following week my husband went out and bought one.