Where the dollar's at home

Thousands and thousands of acres

New York’s Adirondack Park stretches 6 million acres on Lake Champlain’s western flank, a tract larger than the state of Vermont and teeming with lakes, wildlife, and forest trails. The Adirondack Museum in Blue Mountain Lake tells its human story. But to learn about its land, the place to go is the year-old Natural History Museum of the Adirondacks, known informally as the Wild Center. The facility in Tupper Lake, whose impressive architecture brings to mind the Adirondack camps of old, has a freshwater aquarium loaded with fish, otters, and other aquatics, a cafe, gift shop, and ongoing programs ranging in subject from how turtles thaw in the spring to what nearby farmers grow. The 31 surrounding acres are a wildlife haven, with two miles of guided nature trails. You can snowshoe out to the Raquette River with a naturalist to identify animal tracks, or wander about on your own: snowshoes are included with admission. Hohmeyer’s Lake Clear Lodge, a 20-minute drive north, offers atmospheric cabins and B&B accommodations, and grows most of the food used in its German-Adirondack cuisine. 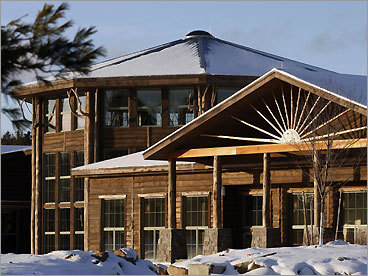