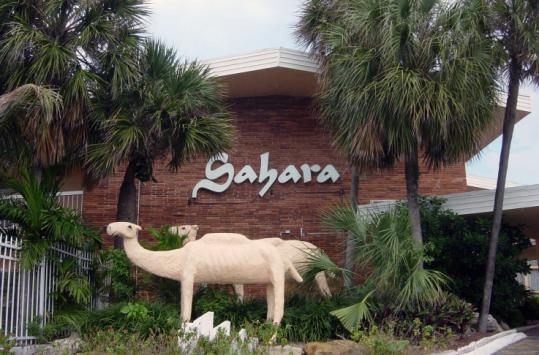 SUNNY ISLES BEACH, Fla. - If you remember this city from its heyday in the 1960s and ’70s, names like Golden Nugget, Carousel, Chateau, Thunderbird, Dunes, or Tangiers will be familiar. They were all motels situated along Collins Avenue in an unbroken 40-block row on the Atlantic Ocean just north of Miami Beach, above 156th Street.

Most were two-story, H-shaped complexes spilling onto the beach, with rectangular pools and diving boards. The units typically offered kitchenettes for guests reluctant to battle the lines at popular restaurants like Arthur Wilde’s or Grandma’s Kitchen.

The wealthy vacationed at the Eden Roc or Fontainebleau hotels in Miami Beach proper, but for the average postwar families, “motel row’’ in Sunny Isles - with its steel-drum bands, shuffleboard tournaments, and beachside jukeboxes - was paradise enough. But the 1980s saw motels begin to shutter, as interest gravitated to South Beach. Today, motel row is largely history, and Rascal House - the last holdout among those old restaurants - closed last year.

Any 40-block stretch of real estate sandwiched between the Intracoastal Waterway to the west and Atlantic to the east is unlikely to remain stagnant for long, however. The Doubletree Ocean Point Resort & Spa was the first to see the possibilities.

“The hotel opened in early 2001 as the Ocean Point,’’ says Harald Bindeus, the resort’s former marketing director. “In 2005 it converted to the Doubletree franchise. It was . . . the first to start the renaissance of Sunny Isles Beach.’’

Sunny Isles (which once self-consciously called itself North Miami Beach) has encouraged others to follow the Doubletree lead: Acqualina, a favorite of affluent Brazilians and Russians; and Le Meridien, self-described as “a chic location [with] European Riviera-style luxury.’’

Perhaps the most eye-catching addition is the Trump complex, with cruise-ship-like smokestacks that evoke the opulence of ocean travel. Inside the Trump International Beach Resort, delicate orchid plants, water cascading down glass, and the sounds of muted jazz ooze sophistication. Kids go wild for the three pools, waterfalls, arches, and grottos reminiscent of a national park. The poolside cabanas even offer air conditioning and TVs.

The city has added more than hotels, beautifying the area with tropical plantings, and increasing green space with parks and beaches. The nearby Bal Harbour boutiques satisfy serious shoppers, and for club-goers, South Beach is a car ride away.

“I was one of the first in South Beach,’’ he says. “I had a restaurant there and entertained many celebrities like Sylvester Stallone. But more than 300 restaurants opened and it became too hectic, with kids partying into the late hours.’’

Epicure’s approach recognizes a yearning in some who visit to relive the old Sunny Isles. There is the (Days) Thunderbird Motel, with a vintage 1955 aqua Ford Thunderbird in its lobby; the Sahara Beach Club, where camel figures have been roaming the front lawn since 1953; and the 1967 Newport Beachside, where Ike and Tina Turner performed.

At the well-maintained Newport, orange, aqua, and lime-green rooms feature pull-down Murphy beds and sliding room dividers. Guests time-travel back to a sprawling pool of pink and aqua tiles, with a thatched-roof bar nearby and retro poolside doings like bingo and limbo. The room rates are retro, too, at $136. The Newport now owns the famed 1936 pier that stretches into the sea by the pool deck.

Whether you seek nostalgia or crave sophistication, Sunny Isles Beach is back with both.

What to do
Samson Oceanfront Park
17425 Collins Ave.
www.sibfl.net/parks_gilbert _samson.asp