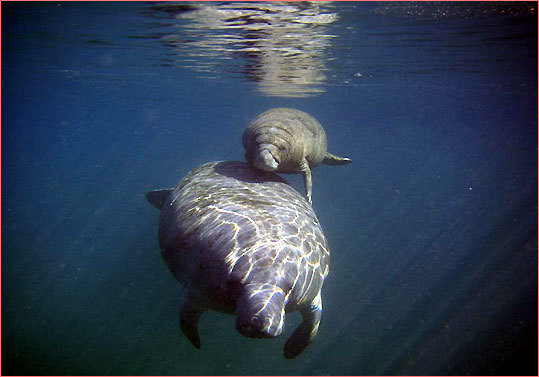 A manatee and her calf float near kayaker holding a camera in the water. (Steve Sapienza)
By Diane Daniel Globe Correspondent / February 1, 2009
Text size – +

CRYSTAL RIVER, Fla. -- After a half-ton, 10-foot-long manatee glided just below my kayak, all was forgiven.

But when I had met guide Matt Clemons earlier that December morning, I told him, only half-jokingly, that I was annoyed with him. "I'd always wanted to swim with the manatees," I said. "But after talking to you on the phone, I just couldn't do it."

"I bet all along there was something about it that didn't feel quite right to you," said Clemons, a biologist, kayak-shop owner, and tour guide.

Matt was right. I had been trying to ignore the nagging feeling that frolicking with a wild animal, especially an endangered species, went against everything I had learned in 25 years of being a conservationist.

Clemons reminded me that the gentle giants can be admired from above the water with minimal impact on the delicate balance of nature. And because manatees sometimes initiate human contact doesn't mean they want it all the time, or that it's good for them. Florida dive shops offering snorkeling with manatees aren't doing anything illegal, but they weren't for me.

I discovered I wasn't alone when I met 20 other paddlers for our three-hour "Do Not Disturb" tour offered several times each winter by the Save the Manatee Club and led by Clemons, a former board member. Clemons operates a similar tour year-round at his Aardvark's Florida Kayak Co., though for this tour he includes more educational information and donates half his proceeds to the manatee group.

"I started these no-touch tours to show the dive shops that you don't have to have dive tours to stay in business. Just look at the whale-watching business," Clemons told our group. "These animals are here to survive, not for our entertainment."

Clemons and the nonprofit Save the Manatee Club, which has 40,000 members and a budget of $1.4 million, preach hands-off "passive observation." While state and federal laws allow humans to touch manatees if the mammal initiates contact, the Endangered Species Act also states that "any activity that alters an animal's natural behavior" is considered harassment and is not allowed. Clearly, there's some gray area on what constitutes harassment.

No-touch proponents have been even more vocal since videos aired on YouTube a few years ago showing snorkelers blocking the path of manatees, separating calf from mother, and even attempting to ride them.

Several on our tour had gone swimming with manatees, but later had a change of heart.

"We went out on a boat with a dive shop the first time we were here, and they didn't even mention rules about touching," said Emily Averette, who with her husband, Harold, has visited Citrus County from their North Carolina home several times in the past decade to see these large aquatic relatives of the elephant.

"I've got 45 minutes of tape of people pushing and petting the manatees and blocking them so they wouldn't leave," Harold said of that first dive.

"Now we only kayak," said Emily. "It's just so quiet, and you're moving at the same level as the manatees. It's a wonderful way to experience them."

Montreal residents Melissa Benoit and Nicole Robuchon, who were in Florida for a two-week vacation, said they snorkeled with manatees last summer. "It was exciting, but it didn't feel right," said Benoit. "Then when we got home we saw the videos on YouTube and were shocked. We told everyone: 'Don't swim with them.' "

Now the women were back to observe and kayak with them.

"It's rare that you can approach such impressive wild animals," Benoit said. "And since they're harmless, it makes the experience exciting but safe. And they're quite cute too, like puppies."

Manatees resemble their elephant relatives with their thick wrinkled skin and color and their beady eyes and snouts. Like elephants, they are herbivores.

While manatees reside in other parts of the state, Citrus County, on the Gulf of Mexico, 80 miles west of Orlando and 70 miles north of Tampa, is Manatee Central. You can't drive down a street here without seeing a manatee mailbox or a Save the Manatee license plate. The area markets itself to tourists as the top place for manatee encounters and is home to six captive rehabilitated manatees at Homosassa Springs Wildlife State Park.

One of the largest herd of manatees in the country (around 350) migrates here each winter because of the warm springs that keep the water at 72 degrees. Statewide, 2,850 manatees were counted last year in a wintertime aerial census by the Florida Fish and Wildlife Conservation Commission. Though the occasional manatee is spotted north of the Carolinas, they call Florida home, as water temperatures below 63 are too cold for them.

Citrus County is paying attention to the debate over the treatment of manatees. Officials have ordered a manatee economic-impact study and a survey of visitors. And in 2007, Crystal River changed its slogan from "Where man and manatee play" to simply "Where manatee play."

The manatees were certainly out and playing the day we visited. Only five minutes into our trip in Kings Bay, we were spotting the creatures. Our destinations were the same as the snorkelers': channels near manatee sanctuaries through which they enter or leave. Spotting them was easy, especially when they were just at the water's surface or coming up for air near our kayaks.

We next paddled up to Kings Bay Drive Bridge, where people usually line up along the railing to watch manatees travel the channel to and from Three Sisters Springs. We didn't visit the springs, which measure about a third of an acre, because they get crowded with dive boats and dozens of swimmers, Clemons said.

Crystal River and conservation partners are in the process of purchasing the 60 acres around Three Sisters to protect the area and build an educational center and viewing area.

"We've had swim-with and harassment problems that I believe are getting better thanks to law enforcement," Vicente said. "Speeding is bad, too. This year we've pulled out a lot of manatees injured by boat strikes. When they get hit by the bow of the boat, chances are they don't survive."

The manatees swimming around our boats weren't in any danger as we drifted along, eyes fixed on the water, waiting to spot their backs or snouts.

I admitted to Benoit that I still had an urge to go on a snorkel trip, but I knew I wouldn't.

"Don't you want to again, even a little?" I asked her.

"I think it's part of human nature to want to touch them," she said. "But I like it better up here because you feel less like an intruder."