An eden of their own design

From a palette tainted by segregation came the Florida Highwaymen's art 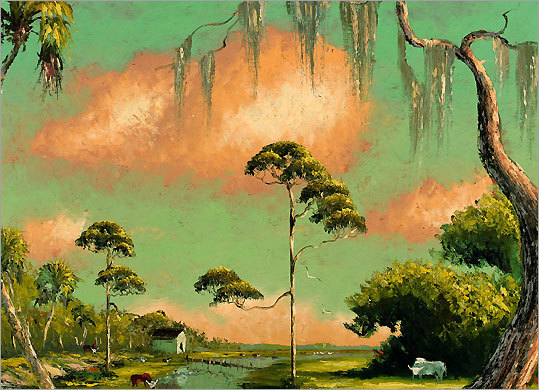 Morning broke like a hand-colored postcard as I sped southbound on Interstate 95 with Gary Monroe. Instantly, the flat scenery was suffused with pink and pearl hues that must be encoded in the brain cells of every native Floridian.

"Harold Newton nailed that light," said Monroe, who wrote the book on Newton and his fellow African-American landscape painters, today known as the Florida Highwaymen. During the segregation-era 1950s, this handful of men (and one woman) found inspiration in a successful white artist named A.E. "Bean" Backus (1906-90). Soon they were turning out paintings like Krispy Kreme doughnuts - up to 200,000 landscapes by some estimates - and selling them up and down Florida highways from the trunks of their cars. If you ever wondered where the technicolor sunsets and flaming hibiscuses that define popular images of Florida got their start, come to Fort Pierce, where some of the artists still live and paint today.

Fifteen miles south of Vero Beach, Big John's Feed & Western Supply and the Tropicana juice train line the roads into downtown Fort Pierce, reminders of its agricultural past. Here, latter-day cowboys herded wild Spanish cattle and many African-Americans migrated because, as Highwaywoman Mary Ann Carroll told Monroe and me, "Daddy heard that money in Florida grew on trees. They were orange and grapefruit trees that we picked for $1.50 an hour."

First on my unofficial tour was a drive-by at 122 A.E. Backus Ave., where the don of Florida landscape art lived and painted, his door and a bottle of rum open to all. Senators on hunting vacations would drop in on Backus. Author Zora Neale Hurston sold him fish. While the cream of local white society trained formally with him, Backus promised Zanobia Jefferson, an art teacher at then-segregated Lincoln Park High, "Send me your students. I'll help all I can." One of them, Highwayman Alfred Hair, learned at Backus's elbow and taught his friends.

Backus's oeuvre is collected two blocks away in the low-slung museum-gallery bearing his name. As the exhibits segue from his paintings to those of others, including the Highwaymen whom he inspired, the repetition of subjects - clouds, sabal palms, weeping cypress - evokes the thrall that Florida's native landscape exerted for generations of Americans. "It was Florida as Eden," says Scott Schlesinger, a Fort Lauderdale lawyer who collects Highwaymen art. "As suburbanization changed the landscape, the paintings spoke to people's nostalgia for the Florida that used to be."

Monroe and I continued to the palm-lined streets of an immaculately restored downtown. Inside the stucco and brightly tiled Arcade Building on US 1, the businesses were dominated by Highwaymen art. Among the galleries, Alfred Hair's son Kelvin runs The Official Highwaymen Gallery, where his landscapes hang with those of his elder colleagues. Kelvin was 6 when his father (1941-70) was killed in Eddie's Place, a local bar. Now fortysomething, his good looks and charismatic personality bear an uncanny likeness to the senior Hair who was a leader among his peers. Kelvin, like his father, is a cohering force among the artists. Through his gallery it's possible to connect with those like Carroll, Al Black, Isaac Knight, and James Gibson, who show and sell from their homes.

The air hung languidly as we drove to the Lincoln Park neighborhood where the artists' improbable careers began. On Avenue D, the main thoroughfare, men played dominoes in the shade of giant mango trees. Roosters crowed. Rib joints had their smokers fired up. We bought a green coconut for a dollar from a farm stand vendor who lopped off the head with a machete so we could drink the juice. When I told him we were going to visit some of the Highwaymen, he said, "I went to school with those guys."

Black's house had an electric-green Norfolk pine in the yard and a gleaming black car in the drive. Tall and ruggedly handsome, he greeted us in a suit and sky blue shirt and showed us inside where trophies to his art banked the hearth. In the 1960s, while Black was repairing typewriters, Hair and his friends were producing paintings like no tomorrow. Hair had developed a technique called "fast painting," laying on scenes with bold, quick strokes in a high-volume, low-cost approach to art that worked brilliantly. The Highwaymen needed salesmen. One day Black gave art sales a try.

"I had five paintings in this hand and five in that, and I sold all I had," he recalled. Soon he quit his day job and was moving oils on Upson board (an old roof sheeting material) before the paint had time to dry. Stories of his sales prowess are legend.

"I'd knock at real estate agencies, banks, bars, legal firms - I even sold paintings at police stations," Black said, smiling broadly. "It was nice art, it was cheap, and it was already framed. People would say, 'Oh, this'll fit right here.' The paintings sold themselves."

Black took up painting after Hair died and hasn't stopped since, not even for a stint in Central Florida Reception Center, a prison where his murals are preserved. While we visited, a neighbor who sells Highwaymen paintings on came over and lined the living room with two dozen of Black's canvasses for us to see.

It's been less than 10 years since Monroe searched out the 26 artists for "The Highwaymen: Florida's African-American Landscape Painters" (University Press of Florida, 2001). In 2004 he nominated them to the Florida Artists Hall of Fame, where their names now stand with Backus's. Since then, paintings once consigned to thrift stores have become hot collectors' items. Boston fine art auctioneers Skinner Inc. recently sold two Highwaymen works.

Heading out of town, we made a last stop at Grant Antique Mall on US 1 north of Vero Beach, a must for Highwaymen enthusiasts. Inside, row upon row of paintings take up a third of the building, including works by Newton (1934-94), whose pieces are prized above all Highwaymen art. Owner Rich Kerchner was generous with his knowledge, explaining such Highwaymen features as the use of carpenters' trim for frames, and the way collectors value different works. For instance, while some of the smaller or newer paintings cost under $1,000, "a Harold Newton with people could start at $25,000," Kerchner said.

Browsing the dreamy land- and seascapes, I realized that I had always known these paintings. They were the ubiquitous images of an idealized Florida ingrained in our collective unconscious. I simply hadn't known who made them until I visited Fort Pierce.

Kathleen Fredrick, who directs the A.E. Backus Gallery & Museum, described how Backus had painted continually in nature, often in places where the Highwaymen weren't allowed to go. Today, most still work from garages or backyards.

At Black's house, a fresh canvass leaned against a fence looking across to a cinderblock wall. The first brushstrokes of a brilliant sunset had been laid on in flaming colors. The beauty was in his head.