For the taking, grown year round, to eat or prepare: everything from the everyday to the exotic

BERKELEY — “I didn’t like organically grown health food. It just didn’t taste good,’’ says Alice Waters in her office as she plans her restaurant’s 40th birthday. Waters says she was “into cafes and politics and salad after dinner’’ when she opened Chez Panisse in 1971. Her idea was simple, and at the time, not simple at all: to bring the market culture she loved in France to her California backyard. Now her vision of the table — where the freshest local ingredients seduce the palette — is a cultural phenomenon. “I’ve always had a slow food restaurant, I just didn’t know it,’’ she says.

But Chez Panisse isn’t the only reason north Berkeley is large on today’s culinary scene. From here to Oakland, young foodies are opening restaurants and markets with the speed of latter-day dot-coms. Let the food crawl begin.

Berkeley’s three farmer’s markets dazzle with the bounty of a year-round growing season. You can eat here, too: organic ice cream, hand-crafted Hodo Soy tofu, Blue Bottle coffee. “This is the best summer job I’ve ever had,’’ says Mickey Davis, a University of California Berkeley student, at the Tuesday market on Derby Street as she hands out samples of organic Frog Hollow Farm peaches to passersby. The joyfulness of the shoppers is infectious, and the produce is gorgeous. No wonder East Bay chefs are inspired.

Chez Panisse culls its menus from this bounty with a curatorial sensibility. An ingredient may come from the wild or a communal farm if it’s best in kind. The media buildup has been so extreme that when my food arrives — a pizzetta with chanterelle mushrooms foraged in the Berkeley hills and a shaved zucchini salad drizzled with pecorino, lemon, and mint — I’m stunned by its simplicity. Dessert comes in a brown Heath ceramic bowl handmade in Sausalito. It holds two Santa Rosa plums and a fistful of mulberries plucked from a tree in Sonoma that bears fruit one ephemeral week of the year.

I get it. Foraging the freshest ingredients and cooking them instantly, artfully, every day is much harder than it looks.

From Stern Hall, a UC Berkeley dorm, where summer visitors stay on campus at hostel rates, the downhill walk passes an eye-catching brown-shingled building known as the Ark. Importantly for foodies, it houses the graduate journalism school where author Michael Pollan leads the country’s conversation about how we eat today.

“Food is deeply nostalgic. It tells the story of where we come from,’’ says Karen Adelman at Saul’s Restaurant and Deli, where Pollan is a regular. For Adelman and co-owner Peter Levitt, infusing deli favorites with healthier ingredients has been a high wire act. With Pollan’s help, the couple struck a feel-good balance with their longtime customers, who have come to appreciate the flavors of grass-fed Niman Ranch pastrami and whole-grain Acme rye. “We even gave side-by-side tastings to prove that house-made cream and celery soda is better than Dr. Brown’s,’’ says Adelman.

Across the street a jazz ensemble plays and the line is out the door for Cheeseboard Pizza’s pie of the day featuring locally grown peaches, mozzarella, and Danish blue cheese. Another line forms a block away for the Juice Bar’s organic casseroles and signature peanut butter smoothie. Both restaurants are spinoffs of the nearby Cheeseboard Collective, a 1960s model of worker empowerment and idealism that continues to thrive.

“It felt like we were part of a food revolution. We thought we would change the world,’’ says Cath Lanigan, who has rotated through every job at the collective, from running the dental plan to maintaining the giant blackboard painstakingly hand-lettered with hundreds of artisanal cheeses. The Cheeseboard baguette, whose sourdough starter recently turned 40, was an inspiration to bread makers in the day and is still hard to beat.

In the median strip, some UC Berkeley students are eating organic noodles from Epicurious Gardens, the nearby tiny food court. Inside, Marc Kelley ladles red lentil soup from a portfolio of hundreds of recipes made with wholesome pot stocks, and Panos Panagos proffers chocolates from Claudio Carallo, whose search for the ultimate cacao bean led him to a plantation on the West African island of Principe.

Around the corner, chess players and pedigree pooches commune outside the original Peet’s Coffee & Tea, where Jim Reynolds learned his beans from the country’s first artisanal roaster, the late Alfred Peet. The tasting in a side room full of his memorabilia proves Peet’s has the touch.

Waters sends me to Ici Ice Cream on College Avenue for homemade organic scoops made by one of her former chefs. “It’s like it has wings. Young people are reinventing food and farming. They get it better than I do,’’ she says.

A lot of them are moving to Oakland, an industrial city of diverse parts with rents that attract artists and shoestring entrepreneurs. They give the city’s gourmet scene an idealistic edge that sets it apart.

Asiya Wadud, a jam maker, started Forage Oakland to create a barter exchange for fruit from unpicked urban trees. Anya Fernald spun off from Slow Food Nation to create a more egalitarian Eat Real Festival (Aug. 27-29), which last year drew an estimated 60,000 people to Oakland’s revitalized waterfront. The top price for a plate was $5 and admission was free.

Name chefs like the four-star, self-taught Daniel Patterson are opening in Oakland, and living there, too. In a former spaghetti factory on Jack London Square, Rick Hackett’s Bocanova, inspired by the combustible concoctions of his Central and South American kitchen staff, is a natural step in a city with so many Latin lunch trucks that a bicycle tour, the Tour de Taco, was invented to take them in.

Oakland’s Temescal neighborhood has the love. Here Barlata’s long table seating and skillets of Spanish paellas, chorizo, and fried eggs add to the gourmet trinity of Dona Tomas, Pizzaiolo, and Bakesale Betty on Telegraph Avenue. Temescal is also the place for golbi (marinated, mesquite-grilled ribs) from the street’s many Korean kitchens.

More interesting places to eat and meet are sprouting in unexpected places, and people are gathering at them like a hearth. Adesso is probably the sexiest thing to come to its Piedmont Avenue corner. Skip the happy-hour free gourmet buffet crush. Order from 30 Italian wines by the glass, and over 50 chef-cured salumi and house pâtés, one more tempting than the next.

Inspired by West African roadhouses, the Chop Bar is set off the beaten path in a recycled industrial space. The grilled chicken salad with avocado, baby potatoes, and tomato-bacon vinaigrette typifies the locally sourced lunch from this comfort food kitchen, whose reasonable prices and monthly pig roast keep them coming.

On a strip known as “auto row,’’ MUA is a stroke of daring that draws a cross-generational crowd. The concrete walls hung with artist-owner Hi-Suk Dong’s work give the feeling of lounging in a warehouse loft. The simple menu — burgers, crispy tofu, squash tempura — has a barfly appeal, and is priced for starving artists. By the same owner, the smaller, equally cool space next door called NEX has a juicier dinner selection and a winning dessert: funnel cake fries with chocolate dipping sauce.

But the prize for industrially-challenged venues goes to Brown Sugar Kitchen on West Oakland’s Mandela Parkway, where Tanya Holland dishes gourmet soul food to a nonstop crowd. The coffee is roasted down the street, and the signature cornmeal waffles with fried chicken comes chemical-free from “the Buddah of chicken,’’ Petaluma’s Fulton Valley Farm. Holland’s neighbor, tofu master Hodo Soy, is around the corner, now booking occasional tasting tours.

For a parting snapshot of our changing food landscape, step back from the waterfront to inner Jack London Square where Oakland’s dualities collide. See the distant shipping cranes poised to receive the world’s containers, and boxes of fruits and vegetables being loaded onto trucks in nearby Produce Square. See Linden Street Brewery, pastry maker Miette, and other small-batch, artisanal food manufacturers moving into the old warehouses. If it’s Tuesday step inside the restored brick workshop of Blue Bottle Coffee for a micro roasted cupping.

Food for pleasure, food for thought. 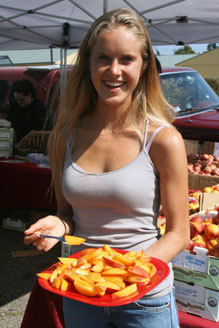 (Patricia Borns for The Boston Globe) Mickey Davis, who is studying nutrition science and sustainable agriculture in college, hands out samples of Frog Hollow Farm peaches at one of Berkeley's farmer's markets.