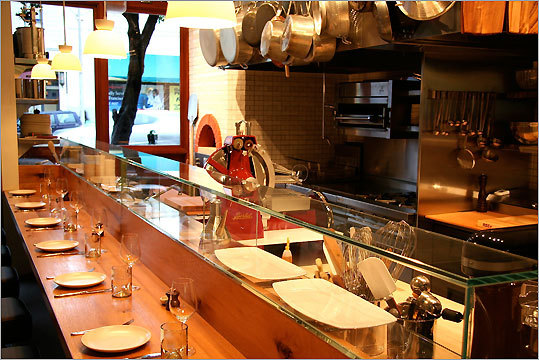 SAN FRANCISCO - Contigo Kitchen + Cava, an engaging, Catalan-style tapas bar in the city’s Noe Valley section, was destined to succeed even before it opened last spring. Owner Brett Emerson had won admirers at some of the Bay Area’s top eateries, including Greens, Chez Panisse, and Cocoa 500.

But what really pushed Emerson’s restaurant into the limelight was his blog, In Praise of Sardines, in which he championed his passion for Spain and his obsession with Iberian food. He also wrote about his fierce commitment to local ingredients and artisanal products. When he decided to open his own restaurant, the blog became an engaging forum for recounting the daunting challenges of transforming a computer shop into a tapas bar. The chef seduced readers with descriptions of sumptuous foods he sampled on his travels in Spain. Six months in, the small restaurant is full almost every night.

Contigo has a warm, casual atmosphere that envelops the diner early on. A wide, double-faced counter bar in the front of the restaurant looks directly into the small open kitchen, with its magnificent wood-burning oven. While diners eat on one side, they can watch as the cooks prepare a dazzling array of pica-pica (small plates) and platillos (larger platters), grabbing from piles of vibrantly-colored produce and stacks of freshly-baked bread.

“We chose the name Contigo which means ‘with you’ in Spanish,’’ says Emerson, “because it implies connection, community, collaboration, and conviviality.’’ The other collaborator in the restaurant is Emerson’s girl- friend and co-owner, Drucker, who oversees the dining room.

Bocadillo is no ordinary sandwich. Instead of the usual baquette, Contigo’s version is fashioned from a soft roll with fork-tender slices of pork belly, crowned with pickled onions and a dollop of spicy aioli. Calamari a la plancha (squid roasted on a hot plate) is tender with a dot of piquant harissa. An ample platter of the slow-roasted lamb tajine with fresh butter beans and roasted tomatoes, served at the next table, drew an enthusiastic response.

For dessert, you can ask for fried-to-order churros (Spanish doughnuts), which come with Barcelona-style chocolate.

Tables are arranged on different levels and more stools line a mini cava bar to one side. At the back, glass doors open to a cozy, tented patio and additional tables are set by the restaurant’s herb garden.

Emerson was insistent on using green materials. Hundred-year-old redwood panels, reclaimed from the restaurant’s exterior, line the walls of the dining room. Tabletops, made from beams of Douglas fir that were salvaged from an old Levi Strauss factory, contrast with white oak banquettes and cabinets built from the remnants of a demolished barn. Wine glasses are made from recycled wine bottles.

Contigo offers six cavas (Spanish sparkling wine), five varieties of sherry, and a strong selection of moderately-priced Spanish wines with a number of both white and red from Catalan-speaking regions.

Emerson’s blog brought diners into his new place, but they’re returning for a homey taste of Barcelona with a California slant.