Location, budget, or idealism can move you to volunteer to work on your vacation here or abroad 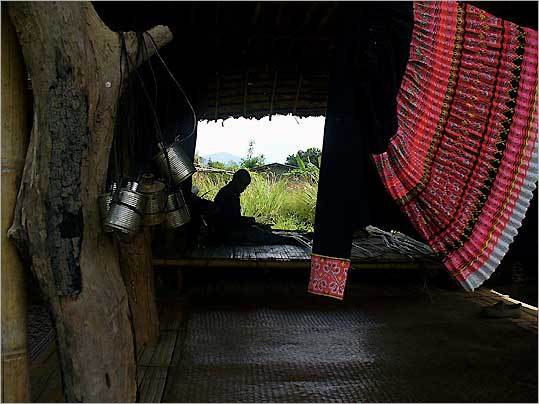 My partner, Ron, and I had been spending our Sundays planning a travel year off, when - poof! - our budget fizzled with the global economy. Instead of giving up, we turned to an option inspired by the 1960s, when students reinvented their parents’ European tours by working in vineyards stomping grapes. For $20 to $28.50 each, we bought two-year memberships in Workaway.info, World Wide Opportunities on Organic Farms (WWOOF), and Help Exchange (HelpX), all Web-based directories of hosts seeking helping hands in exchange for room and board.

In Santa Cruz, Calif., Robin Moore and Lauren Reppy had gone before us. “We wanted to travel for eight months but had only $5,000 apiece,’’ Moore says. Interested in organic food and sustainable living, the couple joined WWOOF. “By spending three weeks on host farms followed by a week playing tourist, we traveled to Spain, Italy, and France, Belgium, Holland, and Ireland,’’ Moore ticks off many of Europe’s most loved (and expensive) destinations.

Was it heaven? Definitely not. In a video the couple made, their fellow travelers report:

“I thought I was gonna learn more.’’

“This is crazy-farm number three.’’

“Shoveling poop and then power washing it.’’

“When it works, it’s such a wonderful experience.’’

For guests and hosts, work-stays are a beautiful mixed bag.

WWOOF was founded in 1971 by Sue Coppard, a London secretary craving a breath of fresh air. One weekend Coppard wangled her way onto a farm and cleaned ditches. She found it “idyllic.’’ The farm staff couldn’t believe their good luck. Now thousands of members strong, WWOOF offers a heartening window onto the upwelling of organic and off-grid holdings around the world.

Sarah Potenza, who started WWOOF USA after trying it for eight months in New Zealand, has seen her network grow to 1,100 host farms since 2001. As for travelers, “We get about 30 new members a day. People who are looking for contribution and meaning, who are tired of just visiting places and throwing money around,’’ Potenza said.

Beyond a few ground rules, the details of work-stays are between you and your host.

“You have to be frank and up front,’’ advises Michele Billings of Little Deer Isle, Maine, who returned to the same western Australian cattle station three times. “Some hosts just want to get a job done. I made it clear that I wanted involvement, not to be treated like staff.’’ Living in separate quarters alongside WWOOF hosts Kathy and Malcolm Boladeras, Billings felt treated “like family.’’ She checked windmills at the watering points, took care of the calves, cooked and ate with the Boladerases, and on one stay, painted their house. “I like seeing a country from the inside. This was the real deal,’’ Billings says. The experience led her to host her first WWOOF guest at Island Organic Farm, her Maine home.

Where WWOOF hosts are mainly organic growers, the HelpX and Workaway.info listings range from eco-resorts, hotels, and riding stables to - more farms. Still, for the hundreds of choices, a sameness runs through them. Often removed from big tourist destinations, work-stay diversions tend toward the sweet but simple - hiking in nearby woods or mountains, swimming at the local beach - the same ones your host family enjoys. Their world becomes your world. Who becomes as important as where.

Workaway.info hosts Betty and Rusty Hastings typify the good host. He’s a career cowboy in his young 80s. She used to teach on the Havasupai Indian Reservation in the Grand Canyon. Recently, they took in three Workawayers at their trail ride outfit northwest of Phoenix (yourarizonamoments.com).

“All three were from Europe and very different from our young people. We really enjoyed them. They helped us a lot,’’ says Betty Hastings. The couple, who cook on a campfire and sleep in hammocks under the summer stars, live uniquely and are genuinely interested in sharing their world. “Most people don’t realize it, but there are quite a few of us living beyond the electric lines,’’ Hastings says. Her guests went on desert trail rides to learn what wranglers do, stacked hay, fixed water pipes, ate hugely, and got an earful of cowboy and desert lore. They even learned a little about gold mining (Rusty has a few old claims). No wonder they’re planning to come back.

Besides host listings, Workaway.info and HelpX provide space for travelers to build on-line profiles. HelpX also posts reviews of hosts and guests; and, an important advantage, it allows two-way communication so hosts can contact you if they like what they read.

Unlike other networks, WWOOF requires you to join a separate organization for each country or region you want to visit, paying a small fee to access each directory. For Joshua Halpern, whose nine-month odyssey totaled about $5,000, it was a small price to pay.

“I’d come to a point where I had a need to get out of my world,’’ says Halpern. “A friend of mine had just spent nine months WWOOFing from New Zealand to Turkey, and she came back filled with hope.’’ From Princeton, N.J., Halpern plotted a course from Hawaii to points west, choosing small farms in sacred places with indigenous hosts. “Up to then I’d never farmed a day in my life. Now, I’m absolutely oriented toward serving the earth,’’ he says.

In Pai, Thailand, the WWOOF host Halpern counted on was no longer participating.

“I biked four miles to a place that wasn’t on the host list. Takam Sukkaew, the grandfather at Tacome Pai Organic Farm, was skeptical but agreed to let me try,’’ he recalls. The relationship blossomed as Halpern helped harvest rice, built mud huts and outdoor toilets, planted garlic, and gathered organic veggies for their meals. “It’s hard work, but you’re adopted into the family. They show you the best places. You start to trust that the experiences you’re supposed to have will unfurl,’’ he says.

As I discovered when my first WWOOF directory arrived in the mail, the “work’’ of working away starts at home. From those who have done it, a few pointers:

Plan, but be flexible. Start well in advance. Hosts in remote locations can take weeks to respond. Some will be booked with guests but may have openings another time. Some won’t even exist (I tried contacting a host in the Workaway.info directory who’s deceased). When you think you’ve got it together, things may change on the ground. Then, repeat after Halpern: “There’s joy in the surprises of not knowing what comes next.’’

Share yourself. Communicate your passions and skills with specifics: Asian fusion or American comfort instead of “cooking.’’ Be clear about things you can’t or don’t want to do.

Ask about time. Hosts are not just a cheap place to stay; they deserve your best pitch-right-in attitude. But listen hard to how your questions are answered. All three websites suggest three to six hours of work, five days a week as a fair exchange. Vagueness or an unwillingness to specify work hours might be a warning sign.

Ask about tasks. Hosts have a never-ending to-do list often filled with mundane chores. If there’s something you hope to learn - to make artisanal cheese, for example - speak up.

Ask about your digs. They cover the range from a tent or an old bus to mud huts and stone manors. Some parts of the world don’t have Western-style toilets except at hotels. Internet access may be miles away. Anticipate what you can and be adaptable.

Test the waters. Arrange a few days’ stay with the option to extend if you connect.

Passport, visas, insurance. Carry copies of travel documents for your hosts. Check each country to see if a visa or work permit is required. Get insurance that covers health, travel, and liability.

All work and no play - no way. Tap your host’s local knowledge to explore free-time options. For extended time off, check out hospitality networks like CouchSurfing (couchsurfing.org), Hospitality Club (hospitalityclub.org), and Servas (servas.org) for alternative accommodations. Founded in 1949, Servas is the oldest yet perhaps least known hospitality network and the only one whose members have been personally interviewed.

As you start down the work-stay path, some hosts will speak of having to deal with slackers. Some travelers will have tales of hyper-demanding hosts. And then there are the overachieving workaholics. On HelpX, a host reviewer wrote glowingly of a guest whose endearing flaw was that he had to be reminded to “stop and smell the roses.’’


Volunteer alternatives There are other paths to work-stay travel, including those that do good. www.Idealist.org provides a connection space for voluntravelers and NGOs (nongovernment organizations) around the world. Many opportunities are low cost, and some are paid.