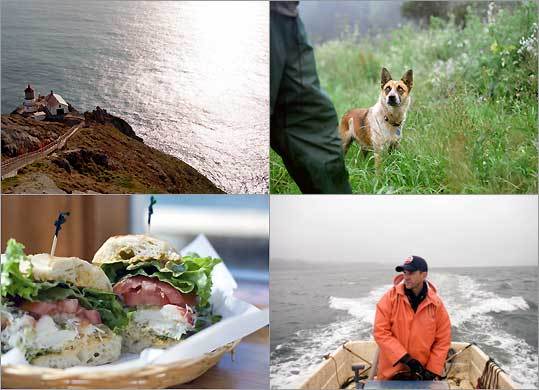 Point Reyes Lighthouse; an Australian cattle dog on a farm near Bolinas; Shannon Gregory on his oyster skiff in Tomales Bay; the crab sandwich at Gregory's family's bayside restaurant. (Photos by Jonathan Levitt for the Boston Globe)
By Jonathan Levitt Globe Correspondent / July 19, 2009

SAUSALITO, Calif. - I’m driving through fog, heading north across the Golden Gate Bridge, toward the Shangri-La lushness that is Marin County. The Golden Gate - the strait below me where San Francisco Bay meets the Pacific Ocean - was called that long before there was a bridge. In the fog there is barely a bridge.

Traveling around the country, asking people about their favorite places, and about their most beautiful places, I heard again and again about the rolling ranchland and wild beaches of west Marin County. Here, the almost 70,000 acres of windswept wildness at Point Reyes National Seashore coexist with cattle ranches, dairy farms, and small organic market gardens. It makes for a balance that attracts tourists content to enjoy the seashore, hike in the hills, and eat good food. Chain stores and rowdy revelers are nowhere in sight.

East Coasters tend to idealize the charms of San Francisco. It’s like New York but the rosemary plants last all year, they’ll say, or, it’s like Boston, but with moody fog and mild winters and all those steep streets.

The city on the bay has all those things, but it’s also crowded and touristy. So it is a relief to cross the bridge and be immediately surrounded by the peace of Marin. On my way north to Seattle I took a short ramble through the area.

Sausalito, within sight of the bridge, was once a fishing village, a hideout for rum runners, an industrial shipyard, and a groovy summer-of-love houseboat community. The houseboats are still here, but these days a tiny one sells for almost half a million dollars and rents for a couple of thousand a month.

Fish, a year-old boutique clam shack right off the docks on the harbor, has a mission to serve only sustainable seafood. I order fish and chips: wild Alaskan halibut battered with locally brewed Anchor Steam beer. It’s $22, a lot for a fried lunch, but everything is perfect and it’s nice to sit in the sun and smell the bay.

Thus fortified, I head into the wilds of West Marin. My first stop is Muir Woods, 559 acres of protected land including a couple of hundred acres of old-growth coast redwood trees right off the highway and only minutes from Sausalito. In the cool fog it looks like heaven but smells like perfume from the busloads of tourists brought to gawk at the trees.

From Muir Woods the road gets quiet fast, climbing the steepness around Mount Tamalpais, birthplace of mountain biking and at 2,571 feet the highest point in the Marin Hills. Green Gulch Farm Zen Center sits in the misty wilds at the base of the mountain and just up the forest-lined road from Muir Woods. A Zen practice center with an organic farm and gardens, Green Gulch hosts meditation retreats and tea ceremonies and offers apprenticeships on the farm. I spend a few hours wandering the farm and gardens and chatting with farm manager Sara Tashker, who lives with her Buddhist priest husband at the monastery. “Everything is integrated here,’’ she says. “There is no separation between Buddhist practice and farming. It’s one life.’’ That seems appealingly simple. Too bad they don’t allow dogs.

Past Green Gulch, steep switchbacks lead out of the mountains and down to sandy beaches. Muir Beach is a good place to swim and let the dogs run free and, on a low, low tide, dig into the sand to expose hot springs. Farther north is Stinson Beach, a 1960s and ’70s rock ’n’ roll hangout where Grace Slick and Jerry Garcia spent time and where some of Janis Joplin’s ashes were scattered. Now it’s a laid-back beach town popular with surfers and day-tripping families.

In 2002 a surfer was attacked here by a great white shark, but that doesn’t stop anyone from going in the water. Actually, all of West Marin is within the so-called Red Triangle, a marine mammal (and therefore great white shark-infested) area of rich, wild ocean that runs from Monterey Bay to the Farallon Islands offshore and up to Bodega Bay. Almost half of the great white shark attacks on humans in the United States have occurred in the Red Triangle.

There are no road signs to direct travelers to Bolinas. The county puts them up and locals take them down (they want the place all to themselves), but with a map or GPS the town is not hard to find. The San Andreas Fault, responsible for the 1906 earthquake that did its best to destroy San Francisco, runs right through the Bolinas Lagoon, a shorebird- and seal-rich tidal estuary outside town. In the drizzle cormorants perch atop telephone poles, trying to dry out their primitive wings and fly again.

Bolinas feels like a secret - above the law and outside reality. Dogs run free on the sandy beach, hippies smoke weed and change diapers, surfers ride the gentle break, and clouds of shorebirds fill the sky. At Smiley’s Schooner Saloon an old guy falls asleep with his head on the bar. Susie Tompkins Buell, founder of Esprit, lives on a big spread here, and Alice Waters, the restaurateur, and Joel Coen, the movie director, supposedly live here. This is a beautiful, expensive place to live, and only one lovely hour from San Francisco.

Duxbury Reef with its low tidal pools is up and over the mesa outside town. This is the south end of the 88-mile National Seashore Beach. The ocean is a monster here, cold, dark, and brutal. In the spring the wind will not stop blowing, not until the salty fogs of summer, I am told.

From Bolinas I drive about a half hour north to Point Reyes Station. There is almost no development along the road, just ranch after beautiful ranch. And cows - dairy cows and beef cattle grazing. In the meadows everything is in bloom: sun cups, pink flowering currants, owl’s clover, tidy tips, sky lupine, and California poppy. This place is more welcoming and not as exclusive as Bolinas. I arrive late in the afternoon but in time to stop into Point Reyes Books, which has Internet access and is a nice place to hang around and browse the carefully curated selection of poetry and nature books.

Around the corner Tomales Bay Foods sells wine and local produce and Cowgirl Creamery cheeses, some of which you can watch being made in the spotlessly clean, glassed-in cheese room. I buy farm eggs, a wheel of triple crème cheese, the thickest asparagus, gnarly artisan bread, and a bottle of local Riesling.

I wander the quiet streets lined with Craftsman houses and then settle in for dinner at the bar at Stellina, a new restaurant near the bookstore which is packed and feels like a big city bistro and serves all manner of local and organic food. The bucatini with Tomales Bay Manila clams, parsley, garlic, and chives is a soulful taste of the place.

With no cheap motels for miles, I book a room at The Old Point Reyes Schoolhouse Compound, an old schoolhouse and barn set high on a sunny ridge just a short walk from town. Like my lunch at Fish, the barn loft at the compound is a worthwhile splurge. It has a full kitchen and a view of the hills and a garden - the perfect place to drink my wine and listen to the night.

In the morning I eat asparagus with the cheese and bread and boiled eggs, and then I make a run for Point Reyes National Seashore, an unusual mix of agriculture and wildness that is one of the most dramatically beautiful places on earth. Beef cattle graze right to the edge of old-growth forest and dairy farms slope down to dozens of miles of undeveloped beaches. I spend the morning hunting for bird and whale bones and sea glass on Kehoe Beach on the north end of the seashore. It’s quiet and isolated, accessible by a half-mile trail through marsh and pasture.

On my way out I stop at Drakes Bay Oysters, where farmer Kevin Lunny grows the luxurious bivalves on Drakes Estero right in the middle of the park. His is the only shucking and packing operation in the state. Right now he grows Pacific oysters but would like to switch to the native Olympia oysters, which he calls “the delicacy of all delicacies.’’ I’m happy with the Pacifics. I buy a dozen and sit by the shore shucking and slurping, wishing I had bought more wine.

North of Point Reyes Station the ranches roll on. On my way out of West Marin and up the coast I stop for a snack at The Marshall Store, a former general store right on Tomales Bay. The owners serve Dungeness crab sandwiches, creamy clam chowder, and deep-cupped oysters either raw or grilled over a hot fire. I order a crab sandwich and more oysters and sit outside watching the bay.

At dusk the water is dead calm. There is drizzle and the drone of tree frogs. The tall grass is alive with red-winged blackbirds. In this place, the down comforters, the cheese and wine stand out against the rain and the hills and the infinite ocean. It all makes for a place that is difficult to leave.

Jonathan Levitt can be reached at www.jonathanlevitt.com.

Point Reyes National Seashore
415-464-5100
Almost 70,000 acres of wild beaches and mountain trails.
www.nps.gov/pore
Your comment is subject to the rules of our Posting Policy
This comment may appear on your public profile. Public Profile FAQ