A place to mix worldly-wise with a bit of funk 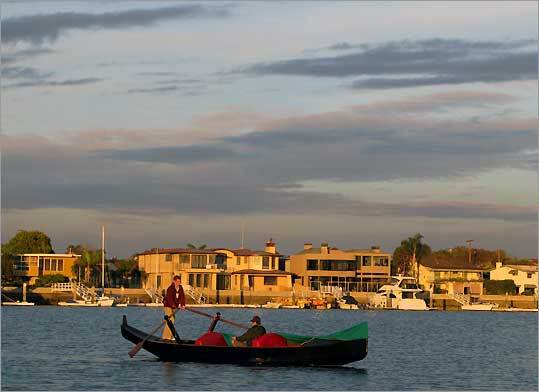 Among the city's international touches are the gondolas in the canals around Naples Island. (Patricia Harris for the Boston Globe)
By Patricia Harris Globe Correspondent / July 19, 2009

LONG BEACH, Calif. - If it’s Wednesday evening, it must be Italy.

As the setting sun cast a golden glow over the canal, Eric Sjoberg let our gondola come to rest and launched into “Santa Lucia.’’ His rich tenor floated away on the breeze. Taking care not to spill our wine, my friends and I applauded vigorously.

Venice? No. We were gliding through the canals around Naples Island, reclaimed marshland that has become one of Long Beach’s most upscale communities. “They built the canals in the 1920s to take around potential land buyers,’’ explained Sjoberg, who grew up on the island. They “chose the name Naples because Venice was already taken.’’

Not a city to sweat the details, Long Beach has accumulated a number of landmarks usually associated with other parts of the world. So the beach city about 20 miles south of Los Angeles seemed like a good, if quirky, choice when we were looking for a budget getaway with some international flavor.

While purists might quibble about “authenticity,’’ we had a fine time crowding into a large racing-style gondola that could easily seat all five of us. And we were perfectly happy to sip California chardonnay rather than Italian prosecco as we ogled multimillion-dollar homes instead of Venetian palazzos. After all, we figured, why shouldn’t there be a few little gondolas in the city that bought the mammoth Queen Mary in 1967?

The once-fastest ocean liner in the world is now a floating hotel and Long Beach tourist attraction. Anglophiles and the merely curious can select from several tours, including a paranormal “investigation’’ that delves into such otherworldly phenomena as the appearance of a woman in modest bathing attire in the swimming pool. My friends and I opted for the more low-key “Twilight Historical Tour,’’ figuring that the ship’s fabulous Art Deco decor and gossipy history offered excitement enough. And since we were in Southern California, there was no escaping a healthy dose of all-American pop culture.

Guide Will Kayne rattled off a list of Hollywood royalty who sailed aboard the Queen Mary: Walt Disney, Greta Garbo, Clark Gable, Bob Hope, Fred Astaire, Marlene Dietrich . . . As for real royalty, the Duke and Duchess of Windsor, frequent passengers, traveled with 155 pieces of luggage, according to Kayne. Rose Kennedy was on the maiden voyage in 1936, though history does not record her suitcase count.

Even after more than 40 years off the high seas, the Queen Mary hasn’t lost her Hollywood allure. Scenes from “Being John Malkovich’’ and “He’s Just Not That Into You’’ were filmed in the swanky Observation Bar, while the Grand Salon (where a wall panel features two unicorns locked in combat) provided the right over-the-top elegance for “Godfather II’’ and “The Aviator.’’

These days Long Beach has to settle for cameo roles. Scenes for “Prison Break,’’ “Dexter,’’ and “CSI: Miami,’’ among others, have been filmed here. But before World War I, Balboa Amusement Producing Co. here was the leading studio of the silent film era.

A 1920s roller-skating rink on the site of the former film studio complex is now home to the Museum of Latin American Art, founded in 1996. “Most people have no idea of contemporary Latin American art,’’ museum staffer Susan Golden told us. “They expect East LA murals.’’

By collecting and displaying contemporary works from Mexico, Central and South America, and the Caribbean, the museum brings a Pan-Latin outlook to the city’s art scene. In addition to temporary exhibitions, the museum draws from its more than 900 works to explore themes in Latin American art and culture, ranging from landscape painting to spiritual beliefs to political activism. Sculptures are shown to dramatic advantage against the brightly painted walls of the museum’s courtyard garden planted with cactuses and palm trees.

We thought about returning to the museum for a salsa class, but opted instead to catch live Spanish guitar music at trendy Sevilla of Long Beach, one of the many restaurants sandwiched between restored Art Deco buildings along Pine Avenue. We shared dates stuffed with Cabrales blue cheese, shrimp croquettes, and other tapas. Talking and eating is one of the best ways for us to catch up after months apart and Pine Avenue’s little ethnic eateries were comfortable and welcoming. At wonderfully old-fashioned George’s Greek Cafe, we passed plates of stuffed grape leaves, flaky spanakopita, and delicious beef and potato meatballs called keftethes.

Even with its gondolas, Greek cuisine, and guitars, you can’t really take the California out of Long Beach. So we decided to enjoy some history and style.

“We tell California history from the very beginning,’’ guide Teresa Barbee told us when we arrived at Rancho Los Alamitos, a low ranch house surrounded by gardens and shaded by giant Moreton Bay Fig trees. The hilltop site, once a Native American ceremonial and trading center, was given to a Spanish soldier in a 1790s land grant. In 1881 it was purchased by John Bixby, who had come for the gold rush. His family struck it rich when oil was discovered on the property.

They donated the house and furnishings to the city in the 1960s. Greatly expanded from its humble beginnings as a crude adobe structure for cowboys and animals, the home still exudes rustic style with its thick walls, dark woodwork, and big fireplaces. Native American rugs and artwork accent the book-lined study while reproductions of the family’s Claude Monet and Mary Cassatt paintings (the originals were donated to a museum) grace the living room walls. “This was real Long Beach,’’ Barbee said, “wealthy ranchers with major artwork in their ranch houses.’’

In search of funkier California style, we perused “Retro Row,’’ a string of shops on Fourth Street where Hollywood film stylists often hunt for vintage clothing. Then we headed to the Aquarium of the Pacific, which anchors a much more gentrified shopping, dining, and entertainment area around Rainbow Harbor.

“It’s the biggest animal ever,’’ museum educator Lori Perkins told visitors who stopped to gaze at the 88-foot-long behemoth. “It’s even bigger than any dinosaurs we know of today.’’

About 2,000 blue whales migrate along the California coast from June through September. Alas, when we visited we were too early to try to spot them. Maybe we’ll come back for the migration another year. After all, we have leads on a good Italian restaurant, a flamenco show, and a rooftop Mexican-style cantina.

Patricia Harris can be reached at harris.lyon@verizon.net.