A ramble in Wine Country 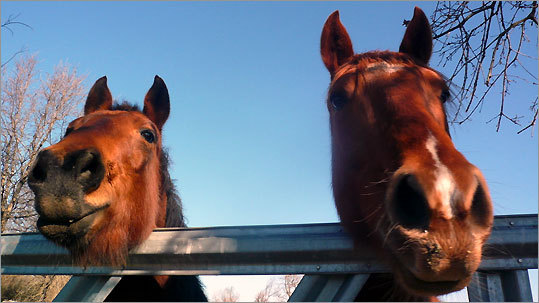 VALLEJO, Calif. - We were hurtling down Sonoma Boulevard in the urban East Bay on a sun-struck Friday afternoon, hoping to find our own way across the wine-thick valleys farther north and to the ocean's edge beyond, when we spotted, parked at the corner of Ohio Street, a truck promising "Tacos."

Jim and I, two old friends reunited for a weekend, would use as inspiration for our road trip one part of a rough route recommended by another friend who had sung the praises, among other things, of a particular winery tucked on a quiet road at the southern edge of the Russian River Valley.

"My favorite place up there," Gabriel had written in an e-mail, "is Marimar Torres."

But near the beginning of our 48 hours in the California countryside, only an hour after leaving the Oakland airport, the taco truck stood as a flavorful symbol of the importance of being open to unexpected adventure. We had cut through central Vallejo, after all, only in the hope that surface streets would offer a faster route north than the quickly crowding interstate. So we did not know then that Vallejo, if one Internet post is accurate, is home to some 14 taco trucks, a veritable traffic jam of authentic Mexican cooking. Of the ambience of Tacos Guadalajara, the writer at Chowhound .com observed: "Nice for a taco truck: two tables & chairs set underneath a big, shady tree. The truck is set next to an auto repair business."

A woman inside the truck ladled spicy red sauce onto steak tacos, and another chopped a batch of fresh scallions. As we turned back to the car, tacos and burrito in hand, a local man sitting at one of the tables introduced himself as a record producer and offered the gift of a CD for a small donation. Jim handed over $5. Just like that we were motoring again toward the open end of the Sonoma Creek salt marsh, munching Mexican food to the beat of Bay Area hip-hop.

Much of coastal California is notable for a striking proximity of urban sprawl and natural expanse, and only a few rap songs later we had already made the turn north to follow the creek through the heart of Sonoma Valley. Soft hills and snug gulches thick with gnarled trees gave the landscape a look John Steinbeck would have recognized, though vines took the place of lettuce more common in Steinbeck's Salinas Valley, south of San Francisco Bay.

Our plan had been to carry straight through to the Russian River Valley, more rustic and less crowded than Sonoma Valley and Napa Valley just to the east, and we picked up the Russian River Road just past twilight. We were following the river's bending banks toward Forestville when the flash of a sign emerged from the darkness. We turned around and pulled in to find the Farmhouse Inn, a place of country comfort that rents cottages and serves gourmet meals from local organic suppliers.

A dinner of rack of lamb lasted for hours and was spoiled only by the choice of an oily syrah. Yet it still seemed to be just a prelude on a trip that found its true course the next morning in the cold hill fog of the valley. We had set off for an easy run up Wohler Road. A hot air balloon was flying to the east, but went out of view as we ran up and around a bend, and the road descended and turned to cross a trestle bridge. A dew-laden spider web hung in the iron railing, and redwoods loomed behind the girders above the bridge.

Jim and I talked about the deeper purpose of our random road trip: reflecting on where we were going in life. "Finding our way," Jim said. "The trick is: How do you get to where you want to be without having a plan?"

One answer: Be open to the serendipitous directions offered by those you meet. As Jim explained it later that day: "So the next thing you know, you're talking to somebody who's reached the same destination but by very different means. And then you have another trajectory that takes off, and it spins off of that person."

It happened like that while checking out of the inn after our run. We told the owner we were on our way to Marimar Torres, when a magazine writer sitting nearby piped up with praise for a place called Suncé. He described it as a funky little winery, notable for its boccie court and family feel. "If you're not talking to the husband," he said, "then you're talking to the wife, or the kids."

So we set off west toward the town of Guerneville, and south toward Suncé.

Along the way, there was Marimar. The winery is set on a low hill along a quiet road and is the creation of Marimar Torres, a member of a long-established Spanish wine-making family. Torres is also a cookbook author, and a tasting at Marimar can come with tapas.

We sat in the sun on an otherwise empty patio, and Patricia, the tapas chef, stopped to talk about Catalan-style fava bean stew with sausages and fresh mint (served with a 2005 pinot noir) and the anchovy pate with caviar mayonnaise (served with a 2006 chardonnay). Our conversation turned to Patricia's homeland of Chile, and about the grapes that grow in the Colchagua Valley there and about those on the slopes descending from the patio.

The food and conversation was enough to fuel us through the afternoon to Suncé, where indeed by twilight, we were playing boccie out back with Frane Franicevic, Suncé's owner and winemaker.

When working without a plan, there can be regrets, if small, such as whether we really should have spent the evening at the pub with the juke box in the center of Sebastopol. But the Sebastopol Inn, just down the street, provided clean comfort for deep sleep, and we were well positioned for the end of our journey the next morning.

An hour-long drive westward passed through a rich variety of terrain: from flat vineyards to dense redwood forest around Guerneville to the arid ridges where the Russian River prepares to meet the sea. There, the town of Jenner is home to 107 souls who mail their letters at a Post Office housed in an old trailer and sleep in perched homes with views of the open ocean. We passed a cottage-like cafe and still-quiet side streets and continued around a bend to an overlook of epic proportions. Gulls swooped and sat on a broad beach. Sea lions surfed in search of breakfast in a narrow tidal channel. It was not yet 10 a.m.

Jim and I soon would return to our young families, and I asked whether our questions about the course of our own lives had brought any answers.