Savannah, Beaufort, and Charleston are historic beauties that beckon to be admired on a walking tour 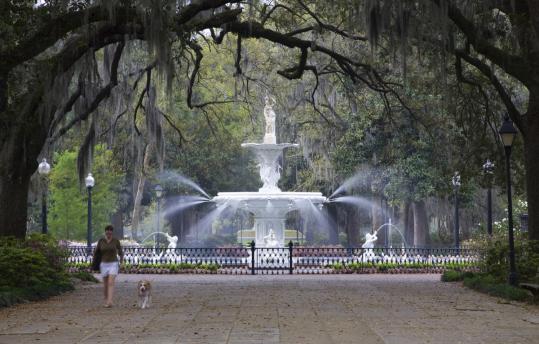 SAVANNAH, Ga. — On any given Saturday, weather permitting, the postage-stamp squares of this historic city are filled with weddings.

Under the gnarled limbs of massive live oaks, couples say their “I do’s,’’ witnessed by passing residents and tourists alike.

“We issue permits, usually in the neighborhood of 400 to 450 per year,’’ said Chris Foran, program coordinator for the city’s Leisure Services Bureau.

People looking for the perfect wedding site, or reception setting, want the green space or a fountain framed by those oaks, he said.

And the oaks, some more than 250 years old, are draped in the Southern tinsel of flowing Spanish moss, which, in the right light, adds an impressionist flair to the streetscape.

Contrary to what some visitors may think about the abundant Spanish moss, “we don’t go and put it in and we don’t take it out,’’ Foran said.

Indeed, atmosphere seems naturally occurring not only in Savannah, but also in the nearby South Carolina cities of Charleston and Beaufort, easy car drives apart. Rich history and Southern charm in movie-like settings are unsurpassed in these communities.

Speaking of movies, smack in the middle of Savannah’s historic area is one of its 22 squares (there were 24) and a familiar one to fans of “Forrest Gump.’’ On a bench in Chippewa Square, Tom Hanks’s character unraveled his amazing tale. The bench is in the Savannah History Museum now, and its spot is occupied by plants.

Right behind Gump’s ready-made set is a bronze statue of James Edward Oglethorpe, an Englishman who established the settlement of Savannah in 1733.

Located on bluffs above the Savannah River, the town was laid out in a grid. As it grew, so did the squares. Each is graced by houses and other buildings stretching across the history of Savannah — or rather, those that survived that history: Massive fires raged in 1796, 1820, 1865, and 1889.

And, no, the 1865 fire was not the work of Union Major General William Tecumseh Sherman, whose 1864 “March to the Sea’’ obliterated much in Georgia. He spared Savannah and presented it as a Christmas present in a telegram to President Lincoln. But Sherman’s store of munitions went up in January 1865 and destroyed about 200 buildings.

These tragedies explain the sometimes odd collections of structures that surround the squares. Some of the earliest surviving homes, from the Colonial period, are on Washington Square. A couple squares west, Federal styles sit next to Greek Revival next to Victorian.

Sherman’s Savannah headquarters was the Gothic Revival Green-Meldrim House on Madison Square. That house and many others are open to the public. Some tours and museums sell a package of multiple admissions.

Walking Savannah, there seems to be a significant site on nearly every corner — one reason, along with the architecture, that the historic area was designated a National Historic Landmark in 1966.

Take a ride with Oglethorpe Tours to get a feel for the city and its history.

“Doesn’t it make sense? Bull Street runs up to City Hall,’’ our guide Mary offered at one point.

Perhaps one of Savannah’s most interesting collections of buildings sits between Bay and River streets. Factor’s Row was the center of the cotton trade in the 19th century (factors are brokers). The buildings each have cast-iron bridges and walkways over the cobblestones of Factor’s Walk. On the river side of the buildings are shops and restaurants, a magnet for visitors, especially in the evening.

Savannah is no sleepy museum. It has a young vibe, aided in large part by the presence of the Savannah College of Art and Design, or SCAD to the locals, which has about 70 facilities scattered through the core of the city.

For eating, locals pointed us to a couple of favorites.

On the edge of the City Market is Vinnie Van Go-Go’s Pizzeria, where thin-crust delights come out of a brick oven. This cash-only establishment offers gigantic pizzas, by the slice or whole pies.

Carlito’s Mexican Bar & Grill on Martin Luther King Boulevard on the edge of downtown is crowded and loud. The drinks are large and the food is terrific and reasonably priced.

Food is a good place to begin in nearby Beaufort.

Located on Port Royal Sound, Beaufort is a small town of antebellum mansions and clapboard churches that probably has made the covers of more Southern novels than you can count and movies, including “The Big Chill,’’ “The Great Santini,’’ and “Prince of Tides.’’

First of all, it’s BYOO-fert. Not that people will mistake you for a local for saying it right. This is a small place with lots of visitors.

Behind its main thoroughfare, Bay Street, Beaufort has created Waterfront Park, where the food competes with the water views at a group of eateries. It’s a relaxing way to pass the time.

Indeed, Beaufort seems rather sleepy compared with Savannah and Charleston, better perhaps as a get-away-from-it-all place than a got-to-see-it-all place.

Inns are a big business here, judging from the number of picturesque establishments dotting the historic area.

Dozens of historic homes, framed by the canopy of oaks and Spanish moss, dot the streets and an enclave called “The Point.’’ Most of the homes are private, and some are difficult to see behind fences and high vegetation. And there are owners who just don’t like the gawking: At the “Tidalholm,’’ a manse with magnificent water views and used in “The Big Chill’’ and “The Great Santini,’’ a sign warns against trespassing.

For shoppers, Bay Street is pretty dull, except for an arcade called the Old Bay Marketplace, where there are some antiques shops, art galleries, Southern Sweets Ice Cream Parlor (with a real lunch counter), and a top-notch store for secondhand books, McIntosh Book Shoppe.

Charleston has its own special grace, a fact all the more remarkable for the two wars (the American Revolution and the Civil War), fires, hurricanes, and earthquakes that have attempted to level it.

Seated on a peninsula facing a huge harbor visited by dolphins and (much less often) manatees, “Charles Town’’ was founded in 1680. By the middle of the 1700s, it was the fourth-largest city in Colonial America and its wealthiest.

Of course, Charleston was the flash point of the Civil War: In 1861 after South Carolina voted to secede from the Union, Confederate forces fired on Fort Sumter. You can still visit the unimposing fort on a 2 1/2-hour narrated boat trip. Or, you can get a closer look at it from land by driving over to nearby Sullivan’s Island, where Fort Moultrie sits in the sand.

Like Savannah and Beaufort, Charleston is for walkers. The booklet “The Complete Walking Tour of Historic Charleston,’’ by Nita Swann, provides a block-by-block guide to the city.

The large historic district, shaded and chock-full of cobblestone streets, alleys, and nearly invisible cut-throughs, is an endless delight of buildings dating from the early 1700s into the 1920s. Plaques dot the walls, telling about a visit by George Washington (the Heyward-Washington House on Church Street), a residence where the Nullification Papers were drafted (Thomas Bee House, also on Church), or the remains of a former slave market (on Chalmers Street).

Many buildings have what appear to be decorative bolts on the walls. Those bolts serve a purpose: They anchor reinforcing rods installed after a great quake in 1886. The “Charleston door’’ is unique to this city. These are solid front doors, but they are attached to false outer walls that lead to porches or gardens.

Market Hall is the gathering and starting place for most visitors.

The long, open structure houses an array of vendors, including women weaving sweetgrass baskets. Basket-making was a craft that slaves brought from Africa. The tightly-woven sweetgrass, palmetto leaves, and pine needles give off a pleasant, spicy scent.

South of Market Hall, at Broad and East Bay streets, is the Old Exchange Building and Provost Dungeon. In this historic structure, open to the public, British tea was stored during the Revolution, the South Carolina signers of the Declaration of Independence were chosen (and later imprisoned by the British in the dungeon), and Washington dined during his 1791 Southern tour. Charleston was once a walled city, and part of the old wall is visible in the dungeon.

East Bay Street is where a series of multicolored 18th-century merchants’ homes have become a symbol of the city. “Rainbow Row’’ is painted, photographed, and emblazoned on countless Charleston souvenirs.

Closer to The Battery, a park at the tip of the peninsula, stands a stretch of mansions, each planted with its narrow side to the street to allow for maximum cooling during the sweltering summers of the pre-air conditioning era. The value of the breezes is obvious if you happen to be in Charleston on a sticky day when there are none.

For some regional delicacies, hit Jim ’N Nick’s Pink Pig on King Street, part of an Alabama-based chain offering barbecue and a thick Brunswick Stew a spoon will stand in.

And this being the “Low Country,’’ an amble to Poogan’s Porch is mandatory. This cozy restaurant in the historic district offers everything from po’boys to fried alligator. There aren’t a lot of them, but try to get a table on the porch.