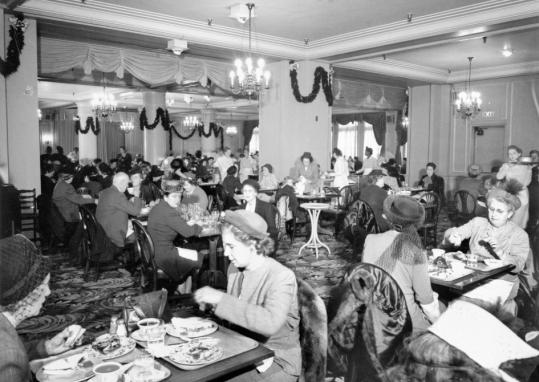 INDIANAPOLIS — Beneath tiered chandeliers, servers in black vests and white shirts sweep past with plates of baked ham loaf and chicken pot pie. Except for diners in blue jeans and the occasional chirp of a cellphone, the L.S. Ayres Tea Room, located in the Indiana State Museum, re-creates early-20th-century elegance.

The original Tea Room opened in 1905 in the L.S. Ayres department store in downtown Indianapolis, where it quickly became a haven for women. When it closed in 1990, an era came to an end — but only temporarily. In the late 1990s, the Indiana State Museum re-created the Tea Room as a winter holiday attraction. It proved so popular that the museum designed a permanent reproduction in its new building, opened in 2002.

Now a lunch spot that can seat 64 visitors, the Tea Room has many elements of the old version — but not all. The original dining room had fashion models circulating among diners to show off the latest styles sold in the store. Hats and gloves were required for women into the 1960s. Children under 10 who behaved well could make a trip to the “treasure chest’’ to pick out a toy. Older Hoosiers remember the dining room as a spot to celebrate family milestones, teach children table manners, and see the latest fashions.

Patti Freeman Dorson, of Indianapolis, and her sister, Lisa Freeman, both now in their 50s, describe trips to the Tea Room with their grandmother as an occasion for donning a dress, white gloves, patent leather shoes, and white anklets. Dorson vividly remembers “the impossibly tall beautiful women who would walk table to table modeling chic outfits from the Crystal Room. They were so elegant and glamorous with sequins, fur, high heels.’’

Operated by AVI Foodsystems, the museum’s Tea Room divides its menu into two parts: “Historically Inspired’’ and “Today’s Indiana.’’ To create the historical items, recipes were gathered from former Ayres employees and customers. Many appeared in a cookbook published in 1998 (a new edition is expected later this year). “The historical side of the menu gets a lot more business,’’ says waiter Billy Blair.

Among the dishes from the past is a thick “chicken velvet soup,’’ a signature dish that tastes like cream of chicken soup probably tasted before canned versions took over. Another popular item, Hawaiian chicken salad, arrives in a hollowed-out pineapple half, with slices of pumpkin bread and a bowl of fresh fruit wedges on the side.

For dessert, the clown cone (a scoop of ice cream decorated like a clown) and the pecan ball (pecan-covered vanilla ice cream with hot fudge) continue to entice children. Buttermilk cake with lemon sauce appeals more to their parents and grandparents.

The decor faithfully reproduces the original carpet, draperies, chandeliers, and even the treasure chest. Enterprising museum staff tracked down and acquired the original wooden tables and chairs. Windows look onto a reproduction of the view from the original department store.

Not everything could be reproduced. The Snow Princess dessert for children — an ice cream scoop decorated with whipped cream and sugar flowers, then topped with a china half-doll figurine and a tiny paper parasol — proved too fragile. So did the original china, monogrammed with a decorative “A’’ in a shield-shaped border, which had to be washed by hand.

Missing details don’t seem to deter families and groups of seniors who troop into the dining room, sometimes up to 200 on a busy day. Residents and tourists all seem to enjoy placing a cloth napkin on their laps and being served on cream-colored plates with a burgundy rim. Blair says, “We have regulars who know us by name. Some come in just for the old tradition. Some came as children and remember things. People who used to model children’s fashions come in, too.’’

The department store is long gone, but the Ayres Tea Room seems destined to thrive on its memory.

Clara Silverstein can be reached at clrsilver@gmail.com.