THIS STORY HAS BEEN FORMATTED FOR EASY PRINTING
Spring Travel 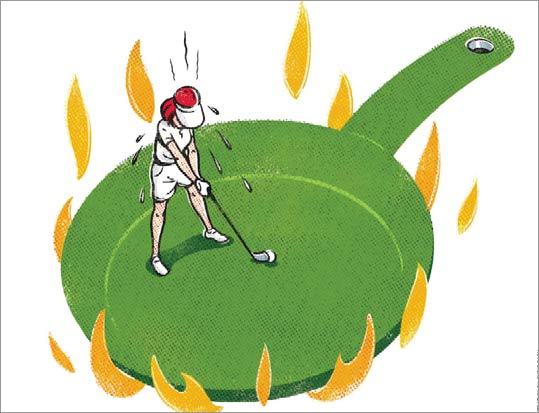 Perspiration trickled down my back. The sun blazed relentlessly in a cloudless sky. A seemingly bottomless bucket of balls stood beside me. My back aching, fingers blistering, a Sisyphean task lay before me: chip, chip, chipping away, trying to get one of those blasted little white spheres to roll into that little metal cup. Was I in hell? Hades? Purgatory?

Not quite. Just golf school.

I know. But in our defense, at the time, my then-boyfriend and I were young, we were poor, we were thrifty. If the “Summer Sizzler” special was the only way we could afford three days at a premier golf academy, we’d tough it out. And, yes, yes: It’s a dry heat.

We were also in that optimistic flush of young love, back at that point in time when my future spouse still had faith that a few days of lessons at golf school might convert me, a hopeless hacking novice, into a prospective golf buddy rather than a future golf widow.

In the school’s defense, they did all they could to combat the heat. My deep-fried brain has blocked out the accommodations, the meals, the flights from Logan and back, but what I do distinctly remember is this: cool, refreshing cupfuls of pink lemonade, available to us at every turn.

While the school’s glossy brochure seduced would-be students with bucolic images, the schedule was brutal. Think boot camp rather than spring semester. A bright and early start time, a lecture and demonstration, followed by several hours devoted to one specific skill – hitting out of sand traps, putting across uneven greens, perfecting the drive. Instructors would saunter by, guiding us with helpful pointers: Swivel this hip, keep your head down, while we muttered and cussed into our clubs.

By 3 p.m., the thermometer reading 110 in the shade, class was finally dismissed. My body sore, my mind spent, I was angling to retreat to the hotel’s pool. Maybe splurge at the spa for a much-needed massage. But no. Our entire afternoons had been purposefully left free for – you guessed it – a four-hour round of golf on the actual course, where we’d test out our newfound skills in real play. By the time we swung around to the final stretch of the back nine, I’d have long abandoned my lemonade for a beer from the cart girl, content to ride along with my diehard duffer into the sunset.

And so it went, for three sweltering days of my life I’ll never get back. But for all my resistance, I have to admit the school worked. My husband’s flawed swing was cured. He credits one instructor who figured out how to get across a key concept, explaining it multiple ways until it finally clicked.

I left with a solid understanding of the game: when to pull my 4-iron and when to grab my sand wedge. And my hard-earned putting skills have kept me competitive – in rounds of mini-golf with our kindergartner.

Sadly, though, I never did end up becoming my husband’s regular golf buddy – more like an old college roommate who meets up for a game once a year. At least now when we do get out for the rare twosome, I whiff the ball a lot less often than I used to.

And I can tell he’s already got his eye on a far more promising prospect to recruit as a classmate the next time around – our unsuspecting 5-year-old daughter.

Melissa Schorr is a member of the Globe Magazine staff. Send comments to magazine@globe.com.