THIS STORY HAS BEEN FORMATTED FOR EASY PRINTING
Spring Travel

How did a city girl end up running cattle? And can she hang on for dear life?

My adventure with the Wild West began quite innocently, with a call from a public radio producer. He was looking for the quintessential urban woman and wanted to know what would happen if she went to a dude ranch. My husband, Paul, would do the audio recording, and I would do the talking. As a born and bred New Yorker, it sounded like fun, and I said yes.

Paul took over from there. He trawled the Internet and found a dude ranch in Arizona named Grapevine Canyon Ranch. Just looking at the website, you could almost hear the neighs of the horses and lows of the cows. Perhaps Paul was so intent on gathering information and getting ready for the ranch that he didn’t hear me when I said, “I walked around a corral on a pony when I was a kid, but I’ve never ridden a horse.”

The next week was a whirlwind of shopping under Paul’s tutelage. First on the agenda were cowboy boots, which, I discovered, were designed for skinny cowgirl feet, not my -accustomed ones. I finally settled on a pair of yellowish-beige boy’s boots, which Paul waxed until they shone. The next item was a bandanna, to protect me from dust. I selected a fashionable red paisley number, with yellow flecks that matched the boots. Cowboy hat? No problem. With my broad-brimmed beige sombrero on my head, I felt so . . . True Grit.

“You look perfect for a cattle drive!” pronounced Paul, who’d learned to ride as a boy growing up in California.

“Cattle drive? Paul, I don’t know how to ride. But I suppose I can watch and take notes on it.”

He smiled. In retrospect, I am a thousand percent sure he didn’t register what I was telling him.

We arrived at the ranch, in Pearce, Arizona, in the late afternoon. I was stunned by the stillness, the stark, shrub-studded desert landscape, the drama of the Dragoon Mountains around us and the Chiricahua Mountains in the distance, and the brilliant purple and orange glow of the Southwest sunset. We joined the other guests and cowboys for a chuck wagon dinner of barbecued ribs, savory baked beans, baked potatoes, homemade corn bread, and apple crisp for dessert.

From Eve Searle, owner of the working ranch, we learned a little about the dramatic history of the area: first, of the indigenous people, who planted corn, made pottery, and disappeared in the 15th century; then of the fierce Apaches – most famously, Geronimo – who engaged in prolonged and bloody wars with white settlers and in times of attack, retreated into inaccessible mountain areas where it was almost impossible to pursue them.

In the late 1800s, there was a wood-chopping camp where Grapevine is today, and later it became a ranch where cattle were run. It all sounded so romantic . . . until the next day, when I understood what running cattle meant.

After a quick riding lesson at 7:30 a.m., Paul hoisted me into a saddle on a very large black horse, and then he mounted his own steed and started fiddling with his recording equipment. I realized then that there was no watching a cattle drive: You were either in it or not.

I tried deep yoga breathing as the beast under me took off. There were two cowboys with us, and I shouted over to them that I didn’t know how to ride. “We’ll help you, ma’am,” one said reassuringly. “That’s why we’re here.”

I flashed back to all the Westerns I had seen, where everyone sat up straight in their saddles. I tightened the strap on my hat, dug my knees into my mount, and tried not to freak. All around us were cows and calves, and as my horse pursued them, I understood what a cattle drive meant: you on a horse, cattle on the land, and your job is to drive them back to the ranch. On the edge of panic, I looked over at Paul, who was leaning off his horse, microphone to the earth, recording the sound of galloping hooves.

My horse had a mind of his own. I bobbed up and down on his back. “You’re boasting, you’re boasting,” one of the cowboys called out to me.

“I don’t boast! I’m not a braggart!” I called back, indignant.

I later learned that he had told me I was “posting” – rising out of the saddle to make the ride on a trotting horse more comfortable. Who knew I was a natural?

My first ride lasted for hours. I thanked the universe for keeping me in the saddle and not leaving me a bloodied body with hoof marks from a stampede. And then I doused myself in thick, white arnica cream, a plant-based remedy for muscle strain, slathering it on until I looked like the Phantom of the West.

The next event was difficult. As I looked out from between the fingers of the hand that was blocking my eyes, I watched the calves being branded and, in the case of the boy calves, castrated. The ranchers assured me that branding doesn’t hurt and that snipping is necessary for a peaceful life and weight gain.

Somehow, I found my appetite in time for dinner, where I met a woman named Amy, who was the fearless cowgirl I wished I could be. She had been to Grapevine Canyon as a guest five times and confided that she dreaded going back to New York, to her deteriorating marriage and unsatisfying urban lifestyle. “I wish I could live here, in nature, on this ranch,” she whispered.

I found out later that her dream came true. Amy married one of the Grapevine cowboys and ended up working by his side as a wrangler. They were wed at the ranch at high noon with guests on horseback in attendance.

It just doesn’t get more cowgirl than that.

Judith Fein is a freelance travel writer based in Santa Fe. Send comments to magazine@globe.com. 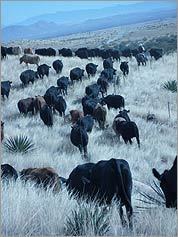 (Photograph of Grapevine Canyon Ranch from Bonnie St. Clair) HOME ON THE RANGE Herding cattle at the Grapevine Canyon Ranch.
Read more from this issue.
Follow Globe Mag on Twitter
Your comment is subject to the rules of our Posting Policy
This comment may appear on your public profile. Public Profile FAQ